The Classic Controller (クラシックコントローラ, Kurashikku Kontorōra?) is a video game controller produced by Nintendo. It is used to play games on the Nintendo Wii video game console.

The body of the controller contains slots on the underside, opened via a button at the top of the controller; the function of the slots was never officially clarified,[2][3] but Nintendo of America employees have unofficially explained that it was intended for use with an unreleased clip that could hold the Wii Remote on the back of the Classic Controller.[4][unreliable source?] Third-party gaming accessory manufacturer Nyko released a clip which serves this function via the locking slots. In addition to a grip shell, the clip contains storage for the controller's three foot cable.[5] While the only color available for the Classic Controller in most markets was white, a limited edition teal and gray version was released in tandem with Monster Hunter G in Japan in 2009,[6] and in 2010, Sonic Colors was bundled with a blue version in Australia.[citation needed] 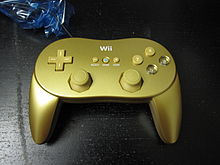 In early 2009, Nintendo announced the Classic Controller Pro which functions the same as the original Classic Controller with the exception of the shoulder buttons, which are now digital trigger-shaped buttons arranged vertically rather than horizontally.[7] Physical changes include the ZL and ZR buttons, which are now full shoulder buttons, the addition of grips underneath the controller for additional stability,[8] and analog sticks which are spaced farther apart than the original. The cord is positioned on top of the controller rather than the bottom, and the spring-loaded attachment slot underneath the original model was removed. The Pro version was first released to Japan in August 2009 in white and black versions.[9] It was subsequently released to Europe and North American in November 2009[10] and April 2010, respectively (though only in black in Europe). The black version is available bundled with Monster Hunter Tri, Pro Evolution Soccer 2010,[11] and SD Gundam Gashapon Wars.[12] In addition to the standard colors, a black version with gold-colored artwork on the face was available bundled with Samurai Warriors 3 in Japan, and a completely gold-colored version is available bundled in the GoldenEye 007 Classic Edition.[13] A red version is slated to be packed for the release of Xenoblade Chronicles.

When the Wii Remote (then known as the "Revolution controller") was first revealed in September 2005, Nintendo had announced a controller "shell" which resembled a traditional game controller, often referred to as a "classic-style expansion controller."[15] As described at the time, the Wii Remote would fit inside the shell, allowing gamers to play games using a traditional-style gamepad, while allowing use of the remote's motion sensing capability. According to Satoru Iwata, it would be meant for playing "the existing games, Virtual Console games, and multi-platform games."[16]

In early demo's of the Wii's capabilities, then referred to as "The Revolution", the system was shown with two players competing in what appears to be Wii Sports with one player using a Classic Controller and another using two Wii Remotes at the same time. It is presumed that this cross functionality was dropped.[17]

During E3 2006 Nintendo introduced the Classic Controller (model number RVL-006, previously RVL-005), which plugs into the Wii Remote via a cord in a similar fashion as the Nunchuk. It contains two analog sticks and two extra shoulder buttons: the ZL and ZR buttons, used to replicate the Z button found on the Nintendo GameCube controller. In contrast to previous description, the Classic Controller does not have the ability to house a Wii Remote. The overall configuration is similar to that of other major seventh generation console gamepads.