The First Church of Christ, Scientist

The First Church of Christ, Scientist 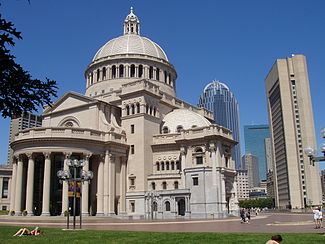 The Original Mother Church edifice, designed by Franklin I. Welch, was built in 1894. Although fairly large for the time, this Romanesque Revival stone structure is often overlooked by casual visitors as it is dwarfed by the much larger domed Mother Church Extension. Designed to fit on an odd kite-shaped lot, it features an octagonal auditorium that seats 1100 people and a massive 126-foot (38 m) steeple. It is built of granite from New Hampshire, Mary Baker Eddy's home state.[2] 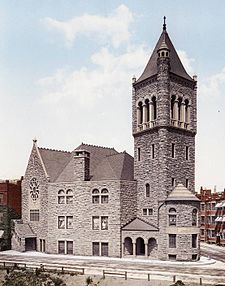 The original church, built in 1894, before the construction of the larger surrounding structures

Added in 1904-1906, the Mother Church Extension was originally designed by architect Charles Brigham, but substantially modified by S.S. Beman when he took over construction in 1905 as a result of Brigham's illness. In particular, Beman minimized the Ottoman and Byzantine elements, bringing the domed structure into line with the Classical architectural style that Beman favored as most appropriate for Christian Science churches.[3] It boasts one of the world's largest pipe organs, built in 1952 by the Aeolian-Skinner Company of Boston.

The Mary Baker Eddy Library is housed in an 11-story structure originally finished in 1934 for the Christian Science Publishing Society.

Designed in the 1960s by the firm of noted architect I.M. Pei, the 14-acre (57,000 m2) Christian Science Plaza along Huntington Avenue includes a large administration building, a colonnade, a reflecting pool and fountain that together make it one of Boston's most visually recognizable sites and a popular tourist attraction.[4] Another draw for tourists is the three-story tall Mapparium, a stained glass globe that visitors view from the inside and The Apiary installation by glass artist Dale Chihuly.