Singaporean Chinese religion refers to religious beliefs of Chinese origin as practiced by the Chinese in Singapore. These beliefs and practices are heavily influenced by the faiths practiced by Chinese communities, such as Taoism, Buddhism, Chinese folks religion and Confucianism.

According to the 2000 census, around 53.6% of the Singaporean Chinese population are Buddhist, 10.8% Taoist, 16.6% Christian [1]. Chinese folk beliefs in Singapore are usually grouped under Taoism, including the practice of worshipping ancestors, various Chinese deities etc. A small minority of Singaporean Chinese practise Islam, Hinduism or Sikhism. 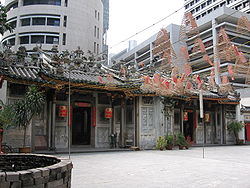 The Yueh Hai Ching Temple is the oldest Taoist temple in Singapore.

Taoism is practiced by 8.5% of Singapore's population, which amounts to more than 200,000 individuals. As a backbone of Chinese culture, Taoism was once a popular belief held by many Chinese, but Taoist beliefs has witnessed a sharp decline from the 1990s onwards, as most of the younger-generation, Chinese Singaporeans perceive the religion as demoded and draconian.

Taoists in Singapore are generally polytheistic, and worship similar Deities. Many of these Deities are incarnated and thus ancestral and are subject to a complex Taoist hierarchy of veneration. The Chinese also worship some Deities of common origins, notably the Jade Emperor, the Northern Emperor or Xiong Tae Gong, Emperor Guan Yu or Guan Tae, and the Heavenly Empress or Matsu. Other Deities that were venerated and frequently taken as auspicious images include Prosperity (Hock in Teochew/Hokkien, Fok in Cantonese, Fu 福 in Mandarin), Wealth (Lock in Teochew/Hokkien, Luk in Cantonese, Lu 禄 in Mandarin), and Longevity (Siew in Teochew/Hokkien, Sao in Cantonese, Shou 寿 in Mandarin) (see Fu Lu Shou). This includes ancestral Gods such as Guan Yu. The God of Fortune is also venerated by many Chinese businessmen all over Singapore as well as Malaysia, Hong Kong, Taiwan, and China. Minor Deities, especially ancestral, worshipped by different language groups may not share a common origin with other Chinese languages groups.

The Hakka are an exception in this case. Unlike other Chinese language groups, some Deities worshipped by Hakka are not depicted in the form of statues. Usually a stone or tablet is used to represent the Deity instead, and this is particularly true side-temple Deities that are not placed in the main altar.

Adherents of Taoism would place house altars in their living room. This is more frequently seen among Chinese families, rather than individuals. The family God or Deity would be placed on the top altar, and a spiritual tablet would be placed at the bottom altar, although ancestral tablets are at times incorrectly placed at the top altar as well. Often, urns, usually placed with some joss sticks, are placed in front of the Deity. Oil lamps may also be placed at the sides, and fruit offerings are also placed in front of the Deity as offerings to the Deity.

A brazier, often painted red, may also be seen. They are meant for burning joss papers. They also hang a small altar, painted red, with the words "Heaven Bestows Wealth" (天宮賜福) painted on it outside the house or simply a small urn filled with ash where joss sticks are placed. The smoke emitted from burning joss sticks is believed to transmit their devotion and at times requests to the Gods in heaven.

Traditional Chinese funeral customs is largely Taoist, although nowadays Buddhist monks are often invited to initiate the rituals. Therefore, either Taoist priests or Buddhist monks are called in to chant mantras and prayers. Funerals are usually conducted under the void deck of an HDB flat, condominium, or within the living premises of the deceased's private house. Funeral rituals usually last three to five days. Due to land spatial constraints, families of deceased members would have the deceased cremated in crematoriums and temples inlieu of their custom of a burial.

Taoists in Singapore are influenced by Buddhism and vice versa. There is definitely a unique culture and practice that has developed locally that gave rise to the localized religious flavor in Singapore. Most who declared themselves as Buddhist are also often seen honoring and revering Taoist Gods and Deities; and most Taoists, on the other hand, are also ready to honor Lord Buddha. In fact, the demarcation between Buddhism and Taoism has obscured and to adherents of either religion, Taoism and Buddhism are actually viewed as a single entity. 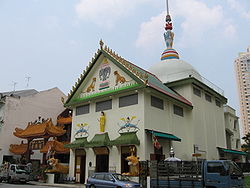 The Sakya Muni Buddha Gaya Temple on Race Course Road is often referred to as the Temple of 1,000 Lights.

Buddhism is practiced by 42.5% of Singapore's population, or more than half of the Chinese in Singapore. The growth of Buddhism and Buddhist teachings in Singapore is not a recent development. Overseas missionaries from Taiwan, Thailand, Sri Lanka, Japan and to a lesser extent, Tibet, have introduced Theravada, Mahayana Buddhism and Vajrayana Buddhism to Singaporeans. The Buddhists in Singapore are not exclusively ethnic Chinese, they include Japanese expatriates, as well as Europeans, Americans, Eurasians, or others who have converted from Christianity.

All the three mainstream Buddhist traditions, namely Theravada, Mahayana and Vajrayana are well represented in Singapore and they unanimously celebrate the festival Vesak. Vesak Day is a festive that commemorates the birth, Enlightenment and the Nirvana of Buddha Gautama.

In recent decades, atop of the inherent Buddhist-Taoist culture, Buddhist missionaries from other parts of Asia have cause large number of converts throughout the region. Valued and learned writings translated into books are one of many factors responsible for the success of Buddhism. Other factors include Singaporeans' relations with Buddhist organizations overseas.

Buddhists in Singapore normally pay frequent visits to Temples for prayers, Dharma Centers of Monasteries for dharma activities like Dharma Talks or discussions, Meditation, Chanting as well as many other activities especially for the youth. 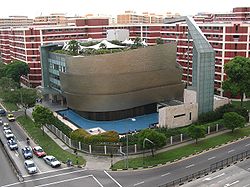 Charismatic churches in Singapore such as City Harvest and New Creation have been especially successful in attracting many Chinese youth.

Christianity is practiced by 14.6% of Singapore's population, the great majority of whom are ethnic Chinese. Most Christians in Singapore are either Roman Catholic or Protestant, with Orthodox Christians forming a minuscule minority.

Protestants in Singapore include Anglicans, Methodists, Presbyterians and Baptists. Non-sectarian Churches such as Pentecostals, Charismatics have made large numbers of converts in the recent years, notably among youths. However, Catholicism (Roman) still remains the largest denomination locally.

Ancestor worship is not permitted among Catholics and Protestants. However, dead ancestors are often prayed for during Mass and various prayer services. But this is considered taboo among Protestant denominations. However, the continuation of ancestor worship persists according to individuals, especially during the Cheng Meng festival.

Christian church services are mainly held in English, though some churches have services in different languages, notably Mandarin, Tamil, Tagalog and even in different Chinese languages. Latin services are occasionally conducted in Catholic churches.

Another 18.6% of the Chinese Singaporean are non-religious adherents and they call themselves freethinkers. In Singapore, this term simply means that the person does not adhere to any single religion. Some retain the Chinese traditions and practices, but many (especially the younger ones) no longer practise Chinese culture, even to the point of being hostile towards Chinese culture and all religions.

A small minority of the Chinese in Singapore follow Islam, Hinduism and Sikhism. Most are converts who have married Malay Muslims or Indian Hindus. Some may also have been raised by Malays or Indians while some may have converted as a matter of personal choice.