Chhena poda (Oriya: ଛେନାପୋଡ଼) is the quintessential cheese dessert from the state of Orissa in eastern India. Chhena poda literally means burnt cheese in Oriya. It is made of well-kneaded homemade cottage cheese or chhena, sugar, cashew nuts and raisins, and is baked for several hours until it browns.[1] Chhena poda is the only well known Indian dessert whose flavor is predominantly derived from the caramelization of sugar. 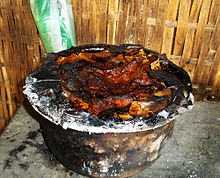 It is said that Chhenapoda originated in the Orissan town of Nayagarh in the first half of the twentieth century. The owner of a confectionery, a certain Bidyadhar Sahoo decided to add sugar and seasonings to leftover cottage cheese one night, and leave it in an oven that was still warm from earlier use. The next day, he was pleasantly surprised to find out what a scrumptious dessert he had created. Chhena poda soon became popular throughout Orissa. Today, it is also made in West Bengal and elsewhere in India.

Chhena poda is usually made at home during traditional festivals in Orissa, such as Durga Puja. It is also served in small traditional roadside stalls and confectioneries throughout the state along with other delicacies such as rasagolla. Since the mid-eighties, it has gradually found its place in restaurant menus across Orissa. After losing out to another traditional Oriya sweet, rasagolla to West Bengal, the Orissa Milk Federation is investing heavily in mass producing and popularizing this delicacy, determined not to let this happen again.[2][3][4][5] 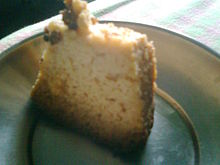