Generally, the milk is raw milk (whole or 3.3%). The milk must be "ripened" before adding in the rennet. The term ripening means allowing the Lactic acid bacteria (LAB) to turn lactose into lactic acid which lowers the pH of the solution, greatly aiding in the coagulation of the milk. This is vital for the production of cheese curds that are later formed into Cheddar.

Rennet is an enzyme that was traditionally collected from the stomach of a milk-fed calf (natural rennet). This enzyme is responsible for the coagulation of the milk proteins to produce curds. Cheese produced this way is neither vegetarian nor Kosher. Coagulation can also be achieved using acids, but yields lower-quality Cheddar. The two key components of natural rennet are chymosin and bovine pepsin. Extracts from plants such as nettles were found to produce similar effects, and have been used in some types of cheese-making (vegetable rennet).

When calf-rennet grew scarce in the 1960s, scientists developed a synthesized type of Chymosin by fermenting certain bacteria or fungi (microbial rennet), but this also wasn't useful for all types of cheese-making.[clarification needed] A solution using recombinant-gene (GMO microbial rennet) technology was developed and approved by the U.S. Food and Drug Administration in 1990. This splices the calf-gene for producing chymosin into the genes of certain bacteria, yeasts or fungi, producing pure chymosin. 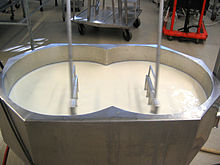 400 lb of milk in a pilot scale cheese vat

Stainless steel knives are used to uniformly cut the curds at various points during the process. Basically a stainless steel frame with stainless steel wires, that will cut the curd cleanly. Vats will vary depending on a variety of factors. Generally oval or rectangle shaped with hollow walls that are used for holding warm water to keep the curds at desired temperatures. This part of the vat is referred to as the jacket. A milling machine is used to cut the matted curds that are formed during the cheddaring process. This allows the curds to be easily salted.

Generally 3 to 4 oz (85 to 110 g) of rennet are added per 1,000 lb (450 kg) of mix. The rennet will serve to coagulate the milk protein and form curds. The vat must be mixed thoroughly after the addition of the rennet to ensure equal mixing, and it also helps to dilute the rennet to make it easier to spread around.

Pure water is used when diluting the rennet as any pH that is not near 7 will rapidly decrease the effectiveness of the rennet, as will chlorine. Thus, water with impurities will result in a vastly decreased yield of cheese. 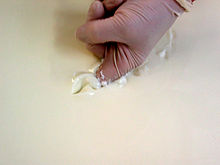 Once the rennet is added, the mixture must be allowed to set and form curds. The mixture is kept at around 29 to 31 °C (84 to 88 °F). Generally temperature is controlled by flowing warm water through the jacket of the vat. Setting time varies, and allowing a proper amount of time is vital. It commonly takes anywhere from 30 to 40 minutes to set the curd.

The most common way to determine when the curd is set is by inserting a flat blade at a 45 degree angle into the curd and raising it slowly. If the curd breaks cleanly leaving a glassy fracture, it is ready for cutting. In a large Cheddar manufacturing facility, this may also be tested using a viscometer. 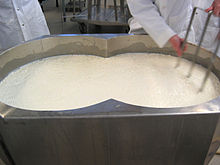 Cutting of the curds after setting

The curd is cut into 0.63-to-1.59-centimetre (0.25 to 0.63 in) cubes using stainless steel wire knives. A smaller cube size means the cheese will be lower moisture whereas a larger cube size will result in a high moisture cheese.

The curds are handled gently after cutting to prevent fat and protein loss to the whey. The curd is prevented from sticking to the sides of the vat, but minimal agitation is desired. The curds are allowed to set again for 10 to 15 minutes. Fat and protein loss may affect the ability of the cheese to be considered Cheddar cheese, depending on the region where it is created (See Code of Federal Regulations for US standards) 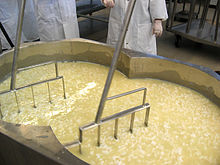 Cooking of curds, during the manufacture of cheddar cheese

The curd is cooked by adding hot water to the jacket of the vat (up to 39 °C (102 °F)). The curd is stirred constantly during this step to avoid uneven cooking or overcooking, and the cooking will only take 20–60 minutes. The whey's pH will be around 6.1 to 6.4 by the end of the cooking. 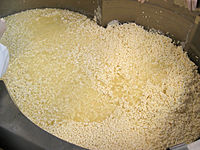 Draining of the whey, the screen is only partially visible here on the right 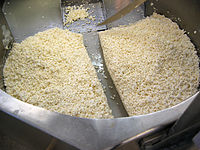 Initial Piling of the curd, in this instance the curds were piled and allowed to sit before being cut and separated

Whey is removed from the curds by allowing it to drain out of the vat. A gate is generally present to prevent curds from escaping. When most of the whey is gone, the curds are raked to either side of the vat, allowing whey to drain down the middle of the two piles.

The curds are allowed to set until they reach a pH of about 6.4.[1]

"Loaves" of curds are cut about 15 centimetres (5.9 in) wide along each side of the vat. After ten minutes, the loaves are turned over and stacking begins. 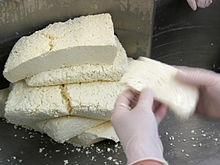 Stacking of the curds during cheddaring 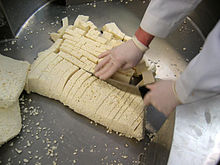 Here the curds are milled by hand

When the turning process is complete, the loaves must be cut down into a size that fits in the mill. The mill will cut the matted curd into about 1.3 centimetres (0.51 in) pieces. During this process, the milled curds are constantly stirred to avoid re-matting.

When all of the curd is milled, salt must be added. The amount of salt varies, but it will be between 1% and 3% by weight. The salt must be mixed thoroughly. Salt helps remove some of the whey from the cheese which lowers moisture content. Salt also adds to the flavour of the cheese. Salt will also stop the cheese from becoming too acidic, which imparts a bitter taste. 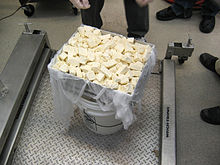 Weighing of cheese curds into moulds 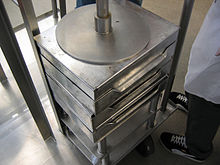 Pressing of the moulds

The curds are placed into moulds that will be used to press the curds and form the blocks of Cheddar. After this, the cheddar cheese will be aged.

Mild Cheddar is generally only aged for one to two months, but mature Cheddar can age for a year or more, even past twelve years. Aging time depends on the type of Cheddar being made.