Chiang Rai city
Chiang Rai is both a city and a province in Thailand. For the province, see Chiang Rai Province. 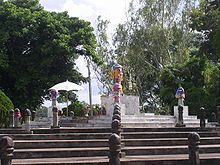 Sadue Mueang, Omphalos of the City

The city was founded by King Mengrai in 1262 and became the capital of the Mengrai dynasty. Subsequently, Chiang Rai was conquered by Burma and remained under Burmese rule for several hundred years. It was not until 1786 that Chiang Rai became Chiang Mai vassal. After Siam or Thailand annexed Chiang Mai in 1899 Chiang Rai was proclaimed a province of Thailand in 1933.

In 1432 during the reign of King Sam Fang Kaen of Mangrai dynasty (1402–1441) the Phra Kaeo, or Emerald Buddha, the most revered Buddha statue, was discovered in Chiang Rai when an earthquake split the Chedi at Wat Phra Kaeo of Chiang Rai City. The beautiful jade figure was then seen concealed within. Another telling of the story has the 'Emerald Buddha' hastily covered in mud just before marauders entered to pillage. It wasn't until many years later, that the clunky-looking mud Buddha was found to actually house the magnificent jade statue, perhaps by way of the earthquake mentioned above - which caused a piece of the clay to break off - revealing the jade beneath.

In 1992, the City Pillar was moved from Wat Klang Wiang to Wat Phra That Doi Chom Thong, where it is known as Sadue Mueang (Thai: สะดือเมือง), the Navel or Omphalos of the City.

The Mae Kok River runs along Chiang Rai's north side, flowing from west out of Burma at Taton town - to east and thereby merging with the Mekong River.

There are four bridges spanning the Mae Kok river within the town's boundaries, each running south/north. Most of the terrain surrounding Chiang Rai town is either flat or has moderate hills. The exception is outward in the west and northwest directions, where limestone hills are evident, some of which have straight-up exposed cliffs. Not surprisingly, that's also the direction where most of the region's Hill Tribe people have their villages, further afield.

Official Population count: According to the Thailand National Statistical Office, as of September 2010, Chiang Rai municipal district has a population of 199,699. With the spread of the city extending into neighboring districts, the metropolitan area is considered somewhat larger by local residents.

12.5% of the population belong to the hill tribes, a collective term for the minority ethnic groups in the North of Thailand such as the Karen, Akha, Lisu, Meo, and Muser. Many Chinese, particularly from Yunnan Province, have migrated to the area and assimilated with the Thai population to such extent that well over half of the large businesses in northern Thailand are owned by people of Chinese heritage.[citation needed]

Chiang Rai City is the capital of Changwat Chiang Rai.

Tourist attractions in or near Chiang Rai town

Route 1 runs from Bangkok through Chiang Rai to Mae Sai on the Burma border. Chiang Rai is 839 kilometers from Bangkok, about 14 hours by car or by bus. According to official bus schedules, the bus ride to Chiang Rai from Chiang Mai takes approximately an hour and 30 minutes, however the 175 km trip most often takes at least two and a half hours. All of these times should take into account the rainy season which lasts from about June to late October, this can severely inhibit travel with road sections often completely flooded and even washed out.

Several flights are available to and from Bangkok daily. Chiang Rai International Airport flight time is about 1 hour and 30 minutes. There are several major operators including Thai airways, Air Asia, Nok air and One to go.

There is scheduled boat service between Chiang Rai and Thaton in Chiang Mai province daily this journey will last about 3–4 hours and is a pleasant alternative to the bus ride through the mountains.

There are currently no rail services to Chiang Rai as the railway line from Bangkok ends at Chiang Mai. There have been talks of extending the rail line from Den Chai to Chiang Rai in the near future,[1] but this is unlikely to happen as the city's population is well below 1 million and there aren't as many international tourists visiting Chiang Rai as Chiang Mai. Also there are no major industrial complexes in the region as it is largely a rural economy.[citation needed]