As'ad Pasha al-Azm (Arabic: أسعد باشا العظم‎, Unknown-1758) was the governor of Damascus under Ottoman rule from 1742 to his deposition in 1757. He is responsible for the construction of several architectural works in the city and other places in Syria.[1]

As'ad was born to a prominent local Arab clan, al-Azm, which controlled much the central districts of Syria, Lebanon, and eventually Damascus in 1725.[1] As'ad governed Hama as a tax collector for a number of years,[2] until his uncle, Suleyman Pasha al-Azm, governor of Damascus, died in 1743.[1] In Hama, he built the Azm Palace where he resided.[2]

Al-Azm succeeded his father as governor of Damascus in 1743. Throughout the first half of the 18th century, the janissary corps created troubles for the governance of the al-Azm family in Damascus, but in 1746, As'ad crushed the local janissaries. This enabled him to establish his unchallenged authority in the city.[3]

He was favored by the Ottoman authorities in Istanbul because he was successful in ensuring the protection of the Syrian pilgrim caravan that annually left for Mecca and Medina during the Hajj. In his dealings with the Bedouins along the caravan route in the Syrian Desert and the Hejaz, al-Azm either used force to subdue them or bought them off. The security of the pilgrim caravan was of prime importance to the Ottoman sultan in his capacity as "Protector of the Two Holy Sanctuaries," especially after the failure of the janissaries to protect the caravan.[3] 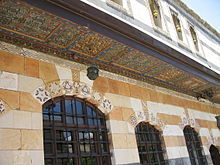 When locust swarms devastated the harvests of interior Syria, al-Azm used it a pretext to launch raids against Druze communities in the Bekaa Valley, plundering their crops which he placed on the market in Damascus.[4] During his governorship, al-Azm relaxed restraints on Christians; for instance, he allowed them to drink alcohol in public. He used his family's great wealth to construct the Azm Palace in Damascus in 1750. Serving as a joint residence and guesthouse, the palace was a monument to 18th century Arab architecture.[1] The famed Khan As'ad Pasha was also built under al-Azm's patronage in 1752.[5] His rule represented the apex of the al-Azm influence in the Levant as they ruled Damascus, Aleppo, Hama, Tripoli, Sidon, and for a short period, Mosul.[1]

Despite al-Azm's ability to ensure the security of the pilgrim caravan, the new Ottoman authorities in Istanbul deposed him in 1757 after fourteen years of governance. The Grand Vizier at the time, Raghib Pasha, denounced him as a "peasant son of a peasant" after a deal between the two of them failed. In addition, the Kizlar Agha of Istanbul disliked al-Azm for apparently not taking good care of him when he passed through Damascus on the pilgrim caravan. The Ottoman state was also interested in confiscating the wealth al-Azm accumulated during his tenure in office. The large amounts of money collected made the state revalue its currency.[3]

In 1757, the pilgrim caravan was annihilated. The Ottomans accused al-Azm of inciting the Bedouin to attack the caravan in response to his deposition earlier that year.[3] Consequently, the Grand Vizier Raghib Pasha ordered al-Azm's execution. A Georgian slave of al-Azm, Osman Pasha, then led Ottoman authorities to the whereabouts of his master's treasures and was awarded the governorship of Damascus.[6]