The Ottawa Panhandlers' Union (French: Syndicat des clochards d'Ottawa) is a union for panhandlers formed in Ottawa, Canada in early 2003. It is a shop of the Industrial Workers of the World (IWW), Ottawa-Outaouis General Members Branch. The union purports to fight the systematic oppression which is faced by street people in Ottawa; this includes the homeless, panhandlers, buskers, and people with a fixed income who are part of the street.[citation needed] Andrew Nellis had been the longtime spokesperson for the union, roughly from 2005, but resigned from the position in April 2011. The new spokesperson is Karen Crossman.

The union has adopted 'Working For Change' as its official motto. 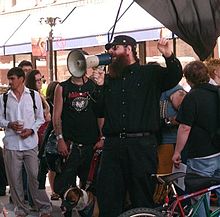 Some of the main pieces of legislation which motivated activists to form the Panhandler's Union was the Safe Streets Act[2] and a piece of legislation dubbed Brian's Law which was eventually found to be unconstitutional as it was used to pick up homeless people up off the street and put them in jail or mental institutions without due process.[citation needed] Other pieces of legislation objected to include the Vending on Highways Law, passed by Ottawa City Hall. Aside from one of its members, the panhandlers' union dues are paid for by the Industrial Workers of the World through donations and various organized events.[3]

The Panhandlers' Union is not a conventional labour union in the sense that its purpose is not to bargain with a third party for a collective contract and higher wages. This misconception led to ridicule of the union, including an article critiquing the union in the Ottawa Citizen which asked if the panhandlers were fighting for "wider sidewalks?" [4] The newspaper granted the union a chance to respond with their own op-ed piece, and their editorial, "Why Panhandlers Need a Union", appeared in the newspaper on March 20, 2006.[5] In May 2007 union and its organizer Andrew Nellis were featured in a multi-page article in the Ottawa City Journal. The newspaper also interviewed panhandlers and the executive director of the Bank Street Business Improvement Area.[1]

The union meets once a month at a drop-in centre in the ByWard Market area of Ottawa. The meetings are open to anyone who is interested in becoming a member of union. The standard IWW rules of membership are followed. Non-members can sign up on the spot to become card carrying members of the IWW. The meetings operate under Rusty's Rules of Order[6] and voting is based on a consensus system.[citation needed]

The union has meetings with panhandlers once a month. Additionally, the union holds demonstrations, primarily in the summer when there is a peak in panhandling activity. Since its formation the union has also held an annual May Day event in Ottawa. The earliest action the Panhandlers' Union participated in was the Homeless Action Strike in the summer of 2004.[citation needed] The strike was organized by Jane Scharf and other poverty activists. People were encouraged to pitch a tent on City Hall property with the intent of bringing attention to the issue of homelessness. The camp was originally set up on the Laurier St. entrance to city hall but was later moved to the Elgin St. entrance at the Human Rights Monument.

On May 1, 2006, the Panhandlers' Union organized a May Day protest to shut down Rideau Street, and succeeded for more than one hour.[citation needed] The action targeted the Rideau Centre because of alleged incidents of violence against the homeless by mall security, two of which resulted in litigation. These alleged incidents included attacks against members of the union. Rideau Centre eventually settled the suit. The direct action also targeted the Safe Streets Act, which the Panhandlers' Union had criticized for being legislation which 'unfairly targets the poor. The action also targeted a by-law passed by Ottawa City Hall which outlawed selling newspapers on street corners.

In 2007, a coalition of businesses, social service providers, downtown residents and police launched a campaign urging people to refrain from giving money to panhandlers.[1] The union's 2007 May Day event targeted the Bank Street Business Improvement Area, which the organizers felt was complicit in targeting the poor and lobbying City Hall for legislation they wished to see pass. A rally was held outside of the BIA offices, with speeches on the issue of panhandling and poverty in Ottawa. Emotions were high during the protest because of recent comments made by Mayor Larry O'Brien comparing panhandlers to pigeons.[1] The response by the union was to egg the offices of the Bank Street BIA. Organizers of the event said this was done because it's the exact behaviour to be expected by pigeons.[7]

Complaint against City of Ottawa

The union prepared a complaint to the Canadian Human Rights Commission against the City of Ottawa in January 2009 after the latter erected a wrought iron fence to prevent homeless people from sleeping beneath an underpass.[8] The fence was installed on the recommendation of the city's transportation committee in order to improve safety on the underpass, though Nellis argued that it in fact threatened the safety and security of those homeless Ottawans who relied upon its shelter in the winter.

Nellis revealed in a statement at an Ottawa City Council meeting that a settlement had been made between the city and the OPU. There is a non-disclosure agreement in place so the exact details of the agreement are unknown.

Nellis is one of the original organizers of the OPU. He was active with the union between 2005 and 2011. He was the spokesperson for the union for much of that time, which involved him meeting with the Ottawa Police and Ottawa city councilors.

Andrew Nellis was arrested on April 30, 2008, the day before the annual May Day march by the IWW and Ottawa Panhandlers Union. Nellis was allegedly caught by police trying to cut a lock on a gate in the pedestrian underpass close to the Rideau Centre. The gate had been recently put up by the City of Ottawa to prevent homeless people from sitting or sleeping under the bridge.

Nellis was first held at the Elgin Police Station but where he was offered a deal to be released on bail with certain conditions, but Nellis refused these conditions and stayed in jail. Days later he was transferred to the Innes Road Prison facility on the Friday after his arrest. During his time in jail, Nellis began organizing his fellow inmates because of what he felt were the poor conditions of the jail. This led to a front page article in the Ottawa Citizen about the Innes Road prison.[citation needed]

When Nellis appeared in court on Elgin Street on May 1, 2008 an anarchist group stormed the court and chanted "Andrew Nellis under attack. What do we do? Stand up, fight back!" The group was made up of Wobblies, members of People's Global Action Bloc Ottawa, and other Ottawa anarchists and activists.

Nellis was released from jail 5 days later. The charges against him by the Crown Attorney were later dropped.

Nellis ran in the 2010 Ottawa municipal election for Ottawa City Council in the Rideau-Vanier Ward. Nellis finished in 3rd with 462 votes.[9]

He is no longer spokesperson for the OPU and has retired from activism to pursue other interests.