Mohamed Hussein Tantawi Soliman (Arabic: محمد حسين طنطاوى سليمان‎, Egyptian Arabic: [mæˈħæmmæd ħeˈseːn tˤɑnˈtˤɑːwi seleˈmæːn]; born October 31, 1935) is an Egyptian Field Marshal and statesman. He is the commander-in-chief of the Egyptian Armed Forces[1] and since February 11, 2011, he has been simultaneously the Minister of Defense, and Chairman of the Supreme Council of the Armed Forces, the de facto head of state of Egypt. Tantawi has served in the government as Minister of Defense and Military Production since 1991 and was also Deputy Prime Minister in January–February 2011. 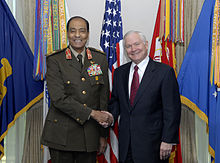 Tantawi with U.S. Secretary of Defense Robert Gates on 25 March 2008.

Tantawi, who is of Nubian origin,[2][3] received his commission as a military officer on April 1, 1956 serving in the infantry. He took part in the Sinai War of 1956, the Six-Day War of 1967, and the Yom Kippur War of 1973, all against Israel. He held various commands and was assigned as military attaché to Pakistan. Tantawi has served as Commander of the Presidential Guard and Chief of the Operations Authority of the Armed Forces. In 1990/1991 he also took part in the U.S.-led Gulf War against Iraq to force it to pull out its troops from Kuwait, which it invaded on 1990 by commanding an Egyptian army unit deployed in the Gulf theater of operations.

On May 20, 1991, following the dismissal of Lt. General Youssef Sabri Abu Taleb,[4] Tantawi was appointed as Minister of Defense and Military Production and commander-in-chief of the Egyptian Armed Forces. He was also appointed as Field Marshal. It is believed that Tantawi would have succeeded Mubarak as president of Egypt, had the assassination attempt in June 1995 been successful.[5] Early in 2011, Tantawi was seen as a possible contender for the Egyptian presidency.[6]

On February 11, 2011 when President Hosni Mubarak resigned, after 18 days of protests from the Egyptian people, he transferred authority to the Supreme Council of the Armed Forces, headed by Tantawi. The council, overseeing issues with the Chairman of the Supreme Constitutional Court, Farouk Sultan, have since dissolved the Egyptian parliament,[7] overseen the referendum over temporary constitutional amendments take place on March 19, and have presided over the accountability of Mubarak and many of the former regime's top figures summons to justice.

On a personal level, Tantawi has kept a relatively low profile since the handing over of power to the Council, only making a first public appearance in an address to mark the graduation of a batch at the Police Academy on 16 May 2011. He has opted to leave most public speeches and press releases to other senior members in the council, he also appointed Prime Minister Essam Sharaf and his cabinet. Tantawi has also received a number of foreign officials, including British Prime Minister David Cameron and US Secretary of State Hillary Clinton.