Mirror galvanometers were used extensively in scientific instruments before reliable, stable electronic amplifiers were available. The most common uses were as recording equipment for seismometers and submarine cables used for telegraphy.

In modern times, the term mirror galvanometer is also used for devices that move laser beams by rotating a mirror through a galvanometer set-up. 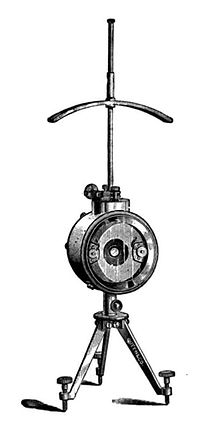 Thomson mirror galvanometer of tripod type, from around 1900. 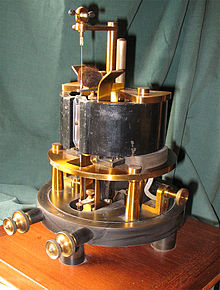 The mirror galvanometer was later improved by William Thomson, later to become Lord Kelvin. He would patent the device in 1858.

Thomson reacted to the need for an instrument that could indicate with sensibility all the variations of the current in a long cable. This instrument was far more sensitive than any which preceded it, enabling the detection of the slightest defect in the core of a cable during its manufacture and submersion. Moreover, it proved the best apparatus for receiving messages through a long cable.

The following is adapted from a contemporary account[1] of Thomson's instrument:

Moving coil galvanometer was developed independently by Marcel Deprez and Jacques-Arsène d'Arsonval about 1880. Deprez's galvanometer was developed for high currents, while D'Arsonval designed his to measure weak currents. Unlike in the Kelvin's galvanometer, in this type of galvanometer the magnet is stationary and the coil is suspended in the magnet gap. The mirror attached to the coil frame rotates together with it. This form of instrument can be more sensitive and accurate and it replaced the Kelvin's galvanometer in most applications. The moving coil galvanometer is practically immune to ambient magnetic fields. Another important feature is self-damping generated by the electro-magnetic forces due to the currents induced in the coil by its movements the magnetic field. These are proportional to the angular velocity of the coil. 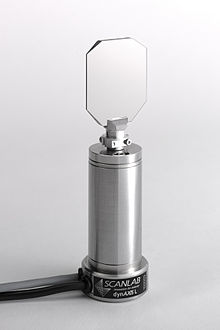 In modern times, high-speed mirror galvanometers are employed in laser light shows to move the laser beams and produce colorful geometric patterns in fog around the audience. Such high speed mirror galvanometers have proved to be indispensable in industry for laser marking systems for everything from laser etching hand tools, containers, and parts to batch-coding semiconductor wafers in semiconductor device fabrication. They typically control X and Y directions on Nd:YAG and CO2 laser markers to control the position of the infrared power laser spot. Laser ablation, laser beam machining and wafer dicing are all industrial areas where high-speed mirror galvanometers can be found. Closer to home, mirror galvanometers are located in most retail outlets, warehouses, and parcel delivery service providers, in the form of barcode readers for Universal Product Codes and other forms of barcodes.