The Spectacular Spider-Man is the name of several comic books and one magazine series starring Marvel Comics' Spider-Man.

The character's main series, The Amazing Spider-Man, was extremely successful, and Marvel felt the character could support more than one title. This led the company in 1968 to launch a short-lived magazine, the first to bear the Spectacular name. In 1972, Marvel more successfully launched a second Spider-Man ongoing series, Marvel Team-Up, in which he was paired with other Marvel heroes. A third monthly ongoing series, Peter Parker, The Spectacular Spider-Man, debuted in 1976. 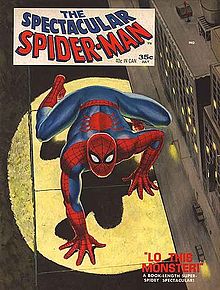 The Spectacular Spider-Man was initially a two-issue magazine published by Marvel in 1968, as an experiment in entering the black-and-white comic-magazine market[1] successfully pioneered by Warren Publishing and others. It sold for 35 cents when standard comic books cost 12 cents and annuals and giants 25 cents. It represented the first Spider-Man spin-off publication aside from the original series' summer annuals, begun in 1964.

The first issue (July 1968) featured a painted, color cover with a 52-page black-and-white Spider-Man story, "Lo, This Monster!", by writer Stan Lee, with art by penciler John Romita, Sr. and inker Jim Mooney. A 10-page origin story, "In The Beginning!", was by Lee, penciler Larry Lieber and inker Bill Everett.

The feature story was reprinted in color, with some small alterations and bridging material by Gerry Conway, in The Amazing Spider-Man #116-118 (Jan.-March 1973) as "Suddenly...the Smasher!", "The Deadly Designs of the Disruptor!", and "Countdown to Chaos!" (with additional inking by Tony Mortellaro on the latter two). These versions were themselves reprinted in Marvel Tales #95-97 (Sept.-Oct. 1978). 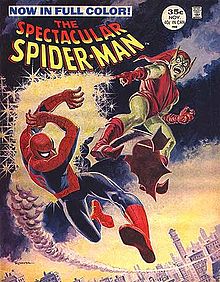 The second and final issue (Nov. 1968) also sported a painted cover, and now the interior was in color as well. Lee, Romita and Mooney again collaborated on its single story, "The Goblin Lives!", featuring the Green Goblin. A next-issue box at the end promoted the planned contents of the unrealized issue #3, "The Mystery of the TV Terror". A version of the Goblin story, trimmed by 18 pages, was reprinted in The Amazing Spider-Man Annual #9 (1973), and portions of the "TV Terror" costume were reused for the costume of the Prowler.[1]

Both issues of the magazine were reprinted in their entirety (albeit reduced to comic size) in the collection Marvel Masterworks: The Amazing Spider-Man #7 (ISBN 0-7851-1636-2). The first issue was also reprinted in 2002, exactly as it was originally presented. This is known as the Facsimilie Edition.[citation needed]

The title's first regular artist was Sal Buscema, who drew the title until mid-1978. After Buscema’s departure, a succession of artists (including Mike Zeck, Frank Miller, Jim Mooney, Ed Hannigan and Greg LaRocque) penciled the series for approximately five years. Scripting initially alternated between Gerry Conway and Archie Goodwin until mid-1977, when Bill Mantlo took over, writing for the title until May 1980. Mantlo was succeeded by Roger Stern, who wrote for the title from June 1980 to March 1981. When Stern departed to write for The Amazing Spider-Man, Mantlo returned to scripting Peter Parker, The Spectacular Spider-Man; Mantlo's second tenure at the title lasted until April 1984. During the Mantlo/Stern era of Spectacular, the stories focused more on Parker's campus life as an undergraduate student/teacher's assistant at Empire State University, and giving more attention to his colleagues than to the more long-running supporting characters in Amazing. Mantlo's first run on the title also featured frequent appearances by The White Tiger, Marvel's first superhero of Hispanic descent, and the first appearance of the supervillain Carrion, and his second run showcased the Black Cat and her romantic relationship with Spider-Man. Mantlo's second run also introduced the superhero duo Cloak and Dagger, created by Mantlo and Hannigan in Peter Parker, The Spectacular Spider-Man #64 (March 1982), and included a story arc which took place from issues #73-79 (Dec. 1982-June 1983), in which Doctor Octopus and The Owl compete for control of the New York underworld, Octopus almost destroys New York with a nuclear device, and the Black Cat is critically injured. 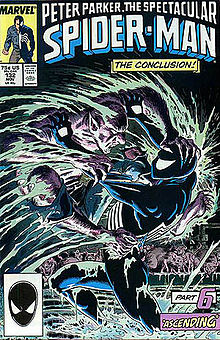 Al Milgrom took over scripting as well as art on the title in May 1984. Milgrom imbued the book with a more whimsical tone, for example, pitting Spider-Man against The Spot, an enemy so ridiculous he gave Spider-Man fits of laughter. Jim Owsley, then editor of the Spider-Man books, disapproved of this approach and had Milgrom replaced as writer by newcomer Peter David in 1985. David and artist Rich Buckler, said Owsley, had the series "focusing on stories with a serious, 'grown-up' tone and more complex themes".[2] The most notable story arc of the David/Buckler era is "The Death of Jean DeWolff" (#107-110, Oct. 1985-Jan. 1986), in which Spider-Man's ally, NYC Police Captain Jean DeWolff - a supporting character in the Spider-Man comics since 1976 - is brutally murdered by the vigilante/serial killer the Sin-Eater. This multi-part story guest-starred Daredevil.

With issue #134 (Jan. 1988), the "Peter Parker" part of the title was removed and the series became simply The Spectacular Spider-Man. The logo changed from a distinctive design to using the same design as that of The Amazing Spider-Man and the 1968 Spectacular Spider-Man magazine; this logo did not change until issue #218 (Nov. 1994). Sal Buscema returned as the regular artist, staying with the title from early 1988 to late 1996; throughout the series' run, Buscema drew over 100 issues, making him by far the series' most frequent contributor.

After his "Return of the Sin-Eater" arc (#134-136, Jan.-March 1988), Peter David was removed as writer. Editor Owsley said editor-in-chief Jim Shooter "disliked Peter's work intensely"[3]. David, in a 2005 interview, believed, "I was fired off Spider-Man because it was felt at the upper editorial level that a novice comic-book writer shouldn't be handling the adventures of Marvel's flagship character".[4] Former Amazing Spider-Man and Spectacular Spider-Man writer Gerry Conway, who additionally wrote Web of Spider-Man from 1988 to 1990, returned to Spectacular after which he left both books to become a story editor on the TV series Father Dowling Mysteries. Conway's 1988-1990 run on Specacular included such story arcs as the Lobo Brothers Gang War, and the conflict between Daily Bugle editor Joe Robertson and his former friend, the Albino criminal Tombstone.

J. M. DeMatteis became the regular writer in mid-1991, injecting a grim, psychological tone into the book (in the same style as the DeMatteis-written "Kraven's Last Hunt", a six-part collaboration with artist Mike Zeck that crossed over the three Spider-Man titles in 1987). DeMatteis began his run with the story arc "The Child Within" (#178-184, July 1991-Jan. 1992), featuring the return of the Harry Osborn Green Goblin. As written by DeMatteis, Harry sank further into insanity and gained the same super-strength possessed by his father, battling Spider-Man again in #189 (June 1992), before being killed off in #200 (April 1993). In an undated 2000s interview, DeMatteis said, "I really loved the two years on Spectacular Spider-Man that I wrote with Sal Buscema drawing. Talk about underrated! Sal is one of the best storytellers and a wonderful collaborator. I loved that run."[5]

DeMatteis left the book in mid-1993 to write The Amazing Spider-Man. Steven Grant and other writers followed through late 1994, when former Amazing Spider-Man writer Tom DeFalco took over. By this time, all the Spider-books were affected by the controversial "Clone Saga" that culminated with Spectacular Spider-Man #226 (July 1995). This story revealed (though it was later reversed) that the Spider-Man who had appeared in the previous 20 years of comics was a clone of the real Spider-Man. This tied into a publishing gap after #229 (Oct. 1995), when the title was temporarily replaced by The Spectacular Scarlet Spider #1-2 (Nov.-Dec. 1995), featuring the "original" Peter Parker. The series picked up again with #230 (January 1996).

Todd DeZago then wrote for a year before DeMatteis returned through May 1998. Luke Ross succeeded Sal Buscema as the artist and remained until the series ended, but there was no regular writer for the last half-year with Glenn Greenberg, Roger Stern, John Byrne and Howard Mackie all contributing during this time. The final issue was #263 (Nov. 1998).

Spectacular Spider-Man vol. 2, titled without the definite article "The", is a 27-issue monthly series published between 2003 and 2005. Each issue was written by Paul Jenkins (except #23-26, by Samm Barnes). The book's primary pencillers were Humberto Ramos and Mark Buckingham. This series replaced the cancelled Peter Parker: Spider-Man vol. 2.[citation needed]

The comic included the storyline Spider-Man: Disassembled where Spider-Man met a new enemy called the Queen who wanted him as her mate. Her kiss caused him to slowly mutate into a giant spider who metamorphosed into human form with enhanced strength and agility along with organic webbing and a psychic link with insects and arachnids.

Spectacular Spider-Man Adventures is a title published by Panini Comics in the UK, although the Adventures portion of the title is often dropped from the cover page. It features a mix of reprinted American material as well as originally produced British material. Spectacular is aimed at a younger audience than Panini's other Spider-Man reprint title Astonishing Spider-Man, and is loosely based on the continuity of the 1990s animated series.