Down is an American heavy metal supergroup that formed in 1991 in New Orleans, Louisiana. The band's current lineup consists of vocalist Phil Anselmo, guitarist Pepper Keenan, guitarist Kirk Windstein, bassist Pat Bruders and drummer Jimmy Bower. Since their formation, Down has gone on hiatus twice. To date, Down has released three studio albums, NOLA (1995), Down II: A Bustle in Your Hedgerow (2002), and Down III: Over the Under (2007). Since 2008,[1] the band has been working on new material, which will result in four separate EPs instead of an album. 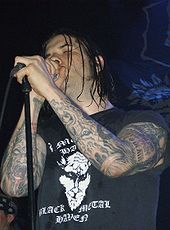 Phil Anselmo formed Down in 1991

Down formed in 1991 with vocalist/songwriter Phil Anselmo of Pantera, guitarist Pepper Keenan of Corrosion of Conformity, second guitarist Kirk Windstein and bassist Todd Strange of Crowbar, and drummer Jimmy Bower of Eyehategod. All of the band members were longtime friends, and shared interest in bands such as Black Sabbath and Saint Vitus, which would significantly influence the music they made. The band made a three-track demo for underground trading. In an effort to build a fan base, the band would ask heavy metal fans if they had ever "heard of this band, Down" and hand them copies of the tape without telling the person that they were in the band.[2][3] Eventually, the tape was distributed throughout the United States and Down played a small concert in its hometown. A record executive from Elektra Records was attending the show. When he found out who the members of the band were, he signed Down to a recording contract.[3]

Down released its debut album, NOLA, on September 19, 1995. Debuting at number 55 on the Billboard 200, the album was certified platinum by the Recording Industry Association of America.[2][4]Allmusic reviewer David Reamer gave the album a nearly perfect 4.5 out of 5 stars, praising the songs "Temptations Wings", "Stone the Crow", and "Bury Me in Smoke". Reamer stated that "this is a landmark album that combines the talents of dedicated rock musicians, and should be included in any collection of heavy metal music."[5] NOLA was supported by a 13-date tour, and afterward the band went on hiatus in order to return to their respective bands.[2] 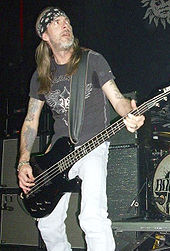 In 1999, while Down was on hiatus, Strange left the band and was replaced by Pantera bassist Rex Brown. In 2002, Down came back from hiatus to make another record. The band wrote and recorded Down II: A Bustle in Your Hedgerow in 28 "drug and booze induced" days in a barn called "Nödferatu's lair."[6] The album was released on March 26, 2002, but was not received with the same positive reviews as NOLA. Blabbermouth.net reviewer Borivoj Krgin stated, "Down II appears to have been thrown together more haphazardly, with much of the material falling short of the standard set by the Down's classic debut offering."[7] Despite poor reviews, the album debuted at number 44 on the Billboard 200.[4] To support the album, Down toured on the second stage of Ozzfest in 2002.[8] Afterward, the band once again entered an indefinite hiatus to focus on their respective bands.

Newly signed to Warner Bros. Records, Down once again reformed in 2006. The band wrote an album over the course of a year. The lyrical content of Down III: Over the Under covers subjects such as the breakup of Pantera, the murder of ex-Pantera guitarist Dimebag Darrell, the band's anger at the aftermath of Hurricane Katrina, and Anselmo's recovery from back surgery and drug addiction.[2][6] Debuting at number 26 on the Billboard 200, the album was released on September 25, 2007, and receive generally positive reviews.[4] Kirk Miller of Decibel Magazine said of the album, "for almost an hour, it’s like the metal world was set right again."[9]

The release of Down III was preceded by a tour with Heaven & Hell and Megadeth. To further support their album, Down headlined a tour starting at the end of September 2007.[10]

On April 22, 2008, the BBC Radio 1 Rockshow broadcast a new session of Down recordings featuring alternate versions of "NOD", "Beneath the Tides", and "Jail", along with a cover of "When The Levee Breaks" (written by Kansas Joe McCoy and his wife Memphis Minnie, and famously covered by Led Zeppelin).

On July 8, 2008, Metalunderground.com reported rumors that Down was planning their fourth album, likely to be called Down IV.[11] Although Down has said little more about their next album, they will write it while they take a break after touring.

On July 24, 2008, frontman Phil Anselmo mentioned in a post on the band's Myspace blog that Down had been "fucking around with some new material" and had "enough material already recorded"--at least six new songs in addition to those that did not make the final cut on Over the Under.[1] Just what or how much will be included on the tentative Down IV is uncertain, but according to Anselmo, there is "definitely enough for an awesome EP, with some surprises within."

Asked in November 2008 what the current status of the new album was, bassist Rex Brown told Billboard.com that Down had been "writing constantly on the road. We still have all these ideas, and we play a lot of new stuff at sound check, just to feel it out. Hopefully, we can get back in the studio in the fall and work on something."[12]

On February 3, 2009, Down was announced—and later removed from—the lineup for the 2009 Bonnaroo Music Festival in Manchester, Tennessee, currently the largest annual outdoor music festival in the U.S. On February 18, 2009, Down was announced in the lineup for the 2009 Roskilde Festival in Denmark. Following these live dates, the band toured the USA and Canada during August and September 2009. On March 30, 2009, Down posted a statement on their message board indicating that they will be back in the studio from October through November writing and recording what will eventually become Down IV.

In the summer of 2009, Down began a US tour without Rex on bass, who had developed acute pancreatitis. Kirk commented on on the Down website, “He’s [Rex] doing much better. He’s gaining a little weight back. Rex is one of my best friends in the world. I love him to death. He’ll be all right. Everybody’s not Lemmy (from Motörhead). I tell him that sometimes. It got to the point where his body just started giving out from 25 years on the road – drinking every day and what not. Most people do it on the weekend. Add that up to every day for 25 years and that’s what happens. By no means is he out of the band. Fortunately for us, my friend Danny (Theriot) who I played with in VICTORIAN BLITZ, my first metal band in the early ‘80s, helped us out. Obviously I prefer Rex to be there. But in a weird way, it is nice, 25 years later, to put my head on Danny’s shoulder while I’m doing a lead, ‘cause we used to do it when we were kids. But, I would prefer to put my head on Rex’s shoulder.” On January 27, 2010, it was announced that Brown had nearly fully recuperated from his fight with pancreatitis. Says Brown, "After two major surgeries to close out 2009, I have recovered from pancreatitis and am looking forward to getting back to work with Down."[13]

Down had discussed reconvening in New Orleans sometime after the 2010 Super Bowl to begin work on a new album. With a release date yet to be announced, the new album will be the band's fourth studio offering.

After legal issues with Warner Brothers Records regarding the rights to the music, Down released Diary of a Mad Band: Europe in the Year of VI CD/DVD on October 5 via Roadrunner Records. The title is a reference to Diary of a Madman, an Ozzy Osbourne album.

On 2011, Phil stated: "Man, there will be a time for Down. Matter of fact we had a meeting this past week, and I know Jimmy's gotta go do an Eyehategod tour in February. But after that, I think we're looking to do some shows starting in March. Maybe local around here, maybe even some Mardi Gras gigs. But yeah, last week we sat around and they played me some new stuff they're working on, and it sounds good. Sounds like it's got a lot of promise, and really they just need me in the fuckin' practice room. So all this is going to happen this year. It has to happen. I know there's a responsibility here. Down has a fanbase and they are very very very loyal. So I don't want to let those people down. They deserve some new music, we have it. We've demoed other songs, there's songs that haven't even been released that people have never heard, so there's always Down there. For all you people out there, don't you stress. We got the Down coming."

Down have recently been added to the Download Festival line-up, and will be playing the Saturday 11 June 2011. They will be playing alongside System of a Down, Avenged Sevenfold and Alice Cooper. Rex did not tour again with Down during their spring 2011 shows. Crowbar bassist Pat Bruders has been filling in for Rex for the 2011 shows so far. Unfortunately, on this tour at least, former Pantera bassist Rex Brown will be absent on-stage.

“Rex is not gonna be with us,” said Keenan. “He’s got things he needs to deal with, and we gave him an ultimatum and he’s trying to work things out. We’ve got Pat (Bruders) from Crowbar playing bass, and he’s ass-kickin’ in the same way. He plays with his fingers — which is really cool; he’s got the whole Geezer Butler thing going on.”

When asked whether or not Brown was still considered a part of the band, Keenan was hopeful but hesitant.

“I don’t know what to really say on that; he’s not out of the band, but he’s not playing with us live.”

On June 22, 2011, Jimmy Bower announced that Rex Brown would not be returning to Down, and that Pat Bruders is his replacement.[15]

The band recently said on their Facebook page they started recording the new record on October 20.

Studio albums
NOLA · Down II: A Bustle in Your Hedgerow · Down III: Over the Under · Down IV
Live albums
Diary of a Mad Band: Europe in the Year of VI
Singles
"Stone the Crow" · "Temptation's Wings" · "Bury Me in Smoke" · "Beautifully Depressed" · "Ghosts Along the Mississippi" · "On March the Saints" · "I Scream" · "Mourn"
Related bands
Corrosion of Conformity · Crowbar · Eyehategod · Pantera · Superjoint Ritual