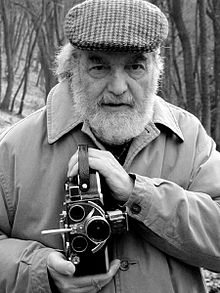 Osvaldo Bayer (Santa Fe Province, Argentina, 18 February 1927) is a journalist and scriptwriter. He lives in Buenos Aires, and in Linz Am Rhine, Germany, where he went into exile during the "National Reorganization Process" dictatorship (1976–1983).[1]

Self-designed as an "ultra-pacifist anarchist", Osvaldo Bayer was raised in Bernal, in the Province of Buenos Aires, and then in Belgrano, Buenos Aires.[1] His parents, however, were living in Rio Gallegos during the strike in the 1920s which led to the Patagonia rebelde movement.[1]

After having worked for an insurance firm and on the merchant marine as an apprentice helmsman,[1] he studied history in the University of Hamburg, Germany, from 1952 to 1956, and became there a member of the Socialist Students’ League.[1]

Returning to Argentina afterwards, he dedicated himself to journalism, investigation, and history of Argentina, as well as writing film scenarios. He also studied medicine a year, then philosophy at Buenos Aires. According to him,

Disgusted by local Socialist policies, he turned towards the Federación Libertaria Argentina (FLA), having already been acquainted to anarchist literature during his time in the German Socialist Students' League.[1]

Furthermore, he founded the Department of Human Rights in the School of Philosophy and Humanities of the University of Buenos Aires.[1]

He worked in the newspapers Noticias Gráficas, Esquel (a Patagonese local newspaper). In 1958 he founded La Chispa ("The Spark"), "the first independent newspaper of Patagonia".

A year later, he was accused by Pedro Aramburu's military regime of diffusing strategic information, and forced by the National Gendarmerie to quit Esquel.[1] Thereafter, Bayer was from 1959 to 1962 general secretary of the Press Syndicate. Immediately after being expelled from Esquel, he was hired by the national daily Diario Clarín, where he became Chief of Politics' section. He had, under his direction, the journalist Félix Luna, who founded in 1963 the history magazine Todo es Historia, to which Bayer collaborated.[1]

In 1963, he was arrested for 63 days by General Juan Enrique Rauch, then Minister of Interior[citation needed] under José María Guido's government, appointed by the military[1] and little-son of Colonel Federico Rauch, for having unsuccessfully proposed during a debate in the library of Rauch (Buenos Aires Province) a plebiscite in order to rename the town to Arbolito, the nickname of the Ranquel (a tribe close to the Mapuche) who had allegedly killed the German militar in battle in 1829. Rauch was qualified by Bayer as guilty of genocide.[citation needed]

During María Estela Martínez de Perón's regime, Bayer was threatened several times, due to the content of his work, and mainly of his book La Patagonia rebelde, on the crushing of a rural workers uprising in Patagonia during the early 1920s, under Hipólito Yrigoyen's rule. He was therefore forced to exile himself to Berlin in 1975, while the "Dirty War" was beginning, and only returned after Raúl Alfonsín's 1983 election and the transition to democracy.

Bayer's first book, on the Italian anarchist Severino Di Giovanni, a best-seller, was proscribed by President Raúl Alberto Lastiri (1973); La Patagonia Rebelde, his second work, by Isabel Perón, and other were burnt by the military after they took power in 1976. Francesco Rosi, who directed the Christ Stopped at Eboli, was supposed to make a film adaptation of his book on Di Giovanni, but renounced after the 1969 Piazza Fontana bombing, saying it was not the time to make a film on a terrorist.[1]

He was nominated Doctor Honoris Causa on 20 April 2003 by the Universidad Nacional del Centro de la Provincia de Buenos Aires for his work in the fields of human rights, literature and journalism. On this day, he alluded to his forced exile, stating that:

Bayer is today involved in the struggle for Indigenous rights. Fifteen days after having been declared "Illustrious Citizen of Buenos Aires" by the mayor Aníbal Ibarra, he was declared persona non grata by the Senate (an initiative of Eduardo Menem) for having proposed the unification of the Argentinian and Chilean Patagonia, as the "first step for a common Latin-American market".[3]

As of 2008, he collaborates with the newspaper Página 12, founded by his friend Osvaldo Soriano (1943–1997). He is the author of the scenario of the film La Patagonia Rebelde, adapted from his book and realized by Héctor Olivera, which won the Silver Bear Award in the 1974 Berlin International Film Festival. He also wrote the scenario of the 1988 film La Amiga, a drama on the dictatorship.