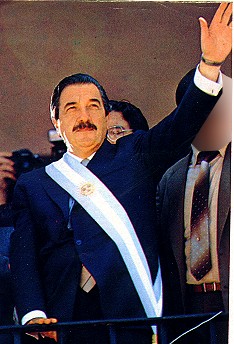 Raúl Ricardo Alfonsín Foulkes (born in ) is an Argentine politician, who was the from to .

Alfonsín was born in the city of , in the eastern of Argentina and raised in the faith. Straight after his elementary schooling he took up studies at the General San Martín Military Academy, where he graduated after five years as a second lieutenant. In 1945, he entered the (UCR) while taking an active role in the reform group . In 1946, he lost to Perón and at about that same time, he entered law school graduating in 1950 at the and went back home in his birthplace. In 1950 he also married María Lorenza Barrenchea. ["Raul Ricardo Alfonsin." Marquis Who's Who TM. Marquis Who's Who, 2006.] Back in his hometown, he took up a role as an attorney, newspaper publisher (""), and an elected member to the city council. In 1955, a coup d'état (self-styled "") brought Perón's reign to an end, and that gave the UCR more political strength.

A member of the , he was elected to the Buenos Aires provincial legislature in 1958. He stood for the Radical Party nomination for the 1973 presidential election, but lost to .After the collapse of the military junta of the in 1983 (among other reasons due to the disastrous ( _es. Guerra de las Malvinas/Guerra del Atlántico Sur), new presidential elections were held. Alfonsín, who had been elected leader of the party in July that year, became president.

His government sponsored the , prosecuting some of the top members of the previous military regime for crimes committed during the , and created the to document their abuses, but found resistance from the military and was plagued by economic and labour problems. Soon afterwards, he sponsored the passing of two laws, the "" (Law of Due Obedience) and the "" (Full Stop Law), which rolled back and halted the prosecution of most Dirty War criminals.In 1984, he signed the , ending a border dispute over the Beagle Channel after mediation of the Holy See. In 1985, he was awarded the first of the .

In 1985, in an attempt to control the country's chronic inflation, his government launched the Austral Plan, by which prices were frozen and the existing currency, the "peso argentino", was replaced by the . It introduced a mechanism called "desagio", by which creditors who received payments after the date of the start of the plan received a minor sum, the difference being the that was assumed when the transaction was agreed upon. The main figure behind the plan was his Minister of Economy, .

Alfonsín's government endured the rebellion of Army factions, the most notable of them during the long weekend of Easter in 1987, when a group identified as (lit. "painted faces", from their use of camouflage paint) and led by Army Major took position in the Army's grounds of . After negotiating with the rebels, Alfonsín returned to the , where an anxious population was waiting for news, and he uttered a then-famous sentence, "La casa está en orden" ("The house is in order"), to signify the end of the crisis.

In 1989 the Alfonsín administration faced more problems. In January, a leftist armed organization attacked the Regiment of La Tablada in Buenos Aires Province; 39 persons were killed. At this point, the economic situation in Argentina had deteriorated to the point of causing (over 200% monthly), and in some large cities (particularly ) there were riots and looting. Alfonsín decreed a , and soon after the situation was controlled, he resigned, leaving office six months before the end of his term to President elect , of the Peronists.In 1994, Alfonsín was instrumental in the signing of the , through which the two largest Argentine parties agreed to support a constitutional reform which (among other things) paved the way for President Menem's reelection. Alfonsín resigned as leader of the Radical Party after their poor performance on the 1995 elections, but continued to be an important figurehead. By 2000, he was again leader of the Party. [http://www.clarin.com/diario/2000/10/10/p-00315.htm] In 2001 he was elected a Senator for Buenos Aires Province, but stepped down after a year to be replaced by .

, Alfonsín supports a faction of the UCR that favours the idea of carrying an independent candidate (in all likelihood, President Kirchner's former Economy Minister ) for the 2007 presidential elections.