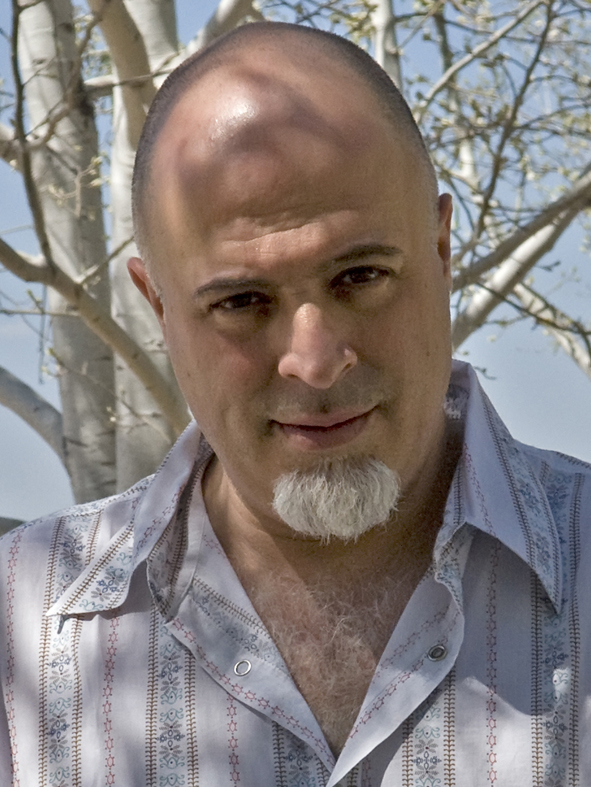 Eduardo Montes-Bradley is an American writer-filmmaker born in on , . He’s best know for his documentary work on Latin American writers and for his controversial and often politically incorrect take on politics. Montes-Bradley has produced, directed, written or otherwise engaged in over forty films. He authored the yet most complete biographical research essay on and hundreds of articles on diverse subjects: , , , , , and .

Montes-Bradley was born in Córdoba, the son of Sara Kaplan, a piano teacher, and . The family relocated almost immediately to . Three years later they will pack again, this time the destination was . Montes-Bradley grew up in the capital city of Argentina surrounded by musicians, poets, composers and artists associated with , the record label his father co-funded in the early 60´s. He attended public school, was brought up agnostic and atheist in a socialist environment favored by his parents. In 1973 EM-B enters High School in a highly politicized time in . The country was undergoing one of it´s most turbulent periods in recent history. was to return that year from exile in where he lived with his wife Isabelita under the protection of General ; and the socialist government of was overthrown in a bloody military coup in Chile lead by . Montes-Bradley, like many other high school students at the time, joined a political party becoming a full time activist. Three years later, General ousted Peron´s widow inaugurating an era of terror which resulted in the death of thousands and thousands more went into exile. Montes-Bradley will frequently recall 1973 as the happiest year of his life: "Not because of anything that I might have believed on, which I probably don´t believe in now, but because of the extraordinary experience of living in a Home full of music and poetry within a country at the brink of Civil War."

Shortly after the military coup of 1976 -which overthrew the reckless government of - Montes-Bradley migrated to the taking up residence in . In the late seventies he worked as a journalist for and El Heraldo del Cine, trade publications in the . His first contribution to film can be traced to Margareta Vinterheden´s "Man maste ju leva", , 1978. During the same period (late seventies early eighties) Montes-Bradley worked in a few propaganda documentaries with the and the Frente Farabundo Martí para la Liberación Nacional () from . In 1984, after the fallout of his first marriage, he moved to and started his own publication: "The Entertainment Herald", a bilingual trade magazine on film. "The Entertainment Herald" was financially backed with advertising from of and his partner . "The Entertainment Herald" was published for two consecutive years in the mid-eighties. By 1986, EM-B was working as a Director of International Sales for Filmtrust Motion Pictures, a distribution company based in , . In 1989 he teamed-up with Spanish producer Javier Gracia to write, produce and direct at least two thrillers that gained worldwide distribution through . In 1995 Montes-Bradley married the leading-lady of his third and last fiction movie. Since then, Montes-Bradley has produced written and directed over fifty documentaries on Latin American arts and culture, many under heteronyms based on fictitious characters such as Diana Hunter, the blind director-lady who "one day went deep into to the forest and was forever lost". The actual number of pen-names used by Montes-Bradley is uncertain but frequent and constant in his work as a filmmaker and a writer. Eduardo Montes-Bradley is married to producer Soledad Liendo.

quote
Docs are safer than fiction, the chances I'll end up married to the lead-actress are very slim considering most of my subjects are dead or about to join St. Peter.
EM-B, "On Marriage and Film", Toulouse, 2005.

El gran simulador (The Great Pretender, 2006) is the documentary in which Montes-Bradley mocks a group who have been manifesting on an ongoing border dispute with over the installation of a paper-mill plant property of Botnia a commercial firm based in . The idea of ridiculing a "popular cause" is unusual in where documentaries are often aimed in the exact opposite direction. The Monty-Pythonesque approach to the cause of the environmentalists did more for the popularity of the filmmaker than the previous twenty years dedicated to making documentaries on writers and philosophers and alike, which resulted on an extraordinary library of more than forty titles on Latin American Culture. The media overplayed the imminent release of "El gran simulador" in in December 2005, and film was ultimately censured by the National Institute of Cinematography (Incaa). In January 2006, Montes-Bradley and his family were force to seek save-Heaven in neighboring Uruguay where the documentary was well received and released on , . In a most recent note "El gran simulador" was ultimately released in Argentina in April, 2008, and distributed by Editorial Perfil, the opposition media conglomerate own by Jorge Fontevecchia.

Eduardo Montes-Bradley directed a handful of music-videos at odds with the dominant trends at the time when MTV Latino was still in the experimental stage. In fact,"Rumbera", by , (, 1994) soon became a cult video not only because of the fact that it was shot in one single take but because of the extravaganza brought to the screen. The seven minutes long take take was shot in a in a cabaret and included monkeys, transvestites, fire-eaters, a salsa-band, dancers and almost a hundred extras. "Rumbera" opened the doors to salsa in the regular basis in MTV Latino, until then, exclusively focused to Rock&Roll, Pop and ballads. "Rumbera", shot on S-16mm, screened and compete in , at the Festival Internacional del Nuevo Cine Latinoamericano in December 1994. That was the first time Cubans had a chance to see Chirino on the screen in his own country where he stills remains, like and others, strictly blacklisted from radio and television. Another interesting music-video by Montes-Bradley is "Dale Pascual" by the pop-band Los enanitos verdes. It was shot in in La Cava, a slum in , in the . The track spells out the hardships a have-not in Argentina who works and works and never gets paid. La Cava provided a crude setting exposing the worst effects of unemployment and recession. To underline the sacrifice of those living in La Cava, the director staged the crucifixion of a naked ten years old boy. The image was too much for the networks in most Latin American countries. In Chile the film was censured and MTV refused to play it across the board.

*"Cortázar sin barba". Biography. Spanish. Random House Mondadori, Debate, 394 pages, , 2005. ISBN:. Contributors Garriga David Gálvez-Casellas and Carles Álvarez Garriga. In less that five hundred pages the author of the yet most complete biographical work on exposes the mechanisms used to build Cortázar: the myth, providing at the same time the tools to destroy the myth, or better yet, helping Cortázar back into his more human and trscendent dimension. Montes-Bradley had previously boarded at least two other holy-cows of the Argentine cultural "aparatik": and . With "Cortázar sin Barba" (Cortázar without a beard) Montes-Bradkey, once again goes for one of the untouchables. Montes-Bradley approaches the pathological relationship of the author with his mother in face of an absent father. The illegitimate nature of the birth of Cortázar’s mother and the clandestine relationship of his grandparents is traced in Cortázar’s literary works with "detectivesque" obsession. “Cortázar sin barba” (Cortázar without a beard), is well documented and written in the style, no longer visible unfortunately, of many classic biographies in the which will tend to prove not Who killed the man but Who made him up. Hence, the French accent in Cortázar turns out to be no more than a dysfunctional dislalia, his father allegedly a diplomat in at the time of Cortázar’s birth is no diplomat but rather a salesman working for his father-in-law who never wanted to marry granny. “No one writes biographies like this one any more” said in his review for "El Cultural" in . “Biographers no longer write like and no foundations dares to finance an undertaking such as the one Montes-Bradley has chosen to write”. But Montes-Bradley goes beyond the simple facts of a life tylored for a generation desperately seeking revolutionaries and literary heroes, to penetrates deeper into the fiber of the Argentine society. Montes-Bradley takes us through loyalty and betray in Argentina at the time the Spanish Civil War; Fascism at the University where Cortázar taught French Literature in the nineteen forties when Peronism came to occupy the space left vacant by the unfatherly figure of the man who bailed living no trace behind. “Cortázar sin barba” is more that just biography, in a way it is a X-Ray to the bottom half of the 20th century in . The first edition of "Cortázar sin barba" was published by Sudamericana, Argentina, 2004. ["Anales de literatura hispanoamericana" by Universidad Complutense de Madrid Cátedra de Literatura Hispanoamericana, Universidad Complutense de Madrid Departamento de Filología Española IV. Vol. ) ] ["Julio Cortázar: El otro lado de las cosas" by Miguel Herráez. Institució Alfons el Magnànim, Diputació de València,2001. ISBN: ]

* "Osvaldo Soriano, un retrato". Italian. Random House Mondadori, , 2001. Translation of previous edition by Grupo Editorial Norma, Barcelona, Buenos Aires, 2000. ISBN: . This book summons a series of interviews in connection with the documentary film on the same subject by Eduardo Montes-Bradley. The list of interviewd men and women include: , Martín Caparrós, Giani Miná, Mempo Giardinelli... There are also a few chapters, introduction and epilogue written by Montes-Bradley with a fare amount of footnotes and references. ["Osvaldo Soriano".By Cristián Montes. Published by RIL Editores,2004. Original from the University of Michigan]

* "Ya sé que todo es mentira". Short Stories. Spanish. Editorial Nuevo Extremo,( 2000. Some of the short stories inclueded in this compilation have been previously published in English in literary magazines in the US. Foreword by .

His interventions can be classified in three categories: a. In-depth articles on subjects as diverse as the life of in the and the aftermath of the ; b. Sudden and brief pieces on current affairs with a particular emphasis in domestic politics in . One of Montes-Bradley´s bull´s eye of choice appears to be the National Institute of Cinematography (INCAA) a government institution repeatedly denounced for it´s high levels of corruption, it´s know arbitrary rules and censorship and the discretionary handling of public resources. c. Letters to the Editor. Probably the most curious form of interventionism. Montes-Bradley has written a substantial number of "letters to the editors" in the past becoming a regular "de facto" columnist in sections of newspapers and magazines other wise reserved for the occasional reader.

In-Depth: Perhaps the most interesting of the in-depth articles is the one dealing with the aftermath of . According to the official story, narrated by in his ,1925, the vessel disappears in front of the camera in 1905 after firing twice against the city of . Montes-Bradley´s questions the mutiny on board the Russian ship and the nature and proportion of the bombardment of as well as the whereabouts of the ship and her crew until the triumph of the Russian Revolution in 1917. The piece refutes Eisenstein's arguments bringing some lite to the years that followed the events of 1905 and to the truth behind the intentions of Eisenstein in his celebrated movie, a work-for-hire commended by the Communist Party long after the facts. The article was published in , on , . Another article worth reading is "El Elvis Rojo". "The Red Elvis" is the story of , -born country singer who defected to the in the nineteen seventies after a brief sojourn in Latin America, particularly Chile and Argentina. The story of Reed is surrounded by mystery and false assumptions. It has been said, for instance, that the red cowboy worked for the , that he was a double agent, that he moved was a agent of Propaganda and that he was a womanizer playing a dangerous game that ultimately cost him his own life. "The Red Elvis" was published for the first time in Spanish in , on , .

Montes-Bradley is a member of "The American Association of Teachers of Spanish and Portuguese" (AATSP), Sons of the American Revolution (SAR), Directores de Cine Independiente (DIC) and the American Club of Buenos Aires.