Julio Cortázar, born Jules Florencio Cortázar,[1] (August 26, 1914 – February 12, 1984) was an Argentine writer. Cortázar, known as one of the founders of the Latin American Boom, influenced an entire generation of Spanish speaking readers and writers in the Americas and Europe.

Cortázar's parents, Julio José Cortázar and María Herminia Descotte, moved from Argentina in 1913 to Brussels, Belgium, where Cortázar was born on August 26, 1914.[2] At the time of his birth Belgium was occupied by the German troops of Kaiser Wilhelm II. Shortly thereafter the family moved to Zürich where María Herminia's parents, Victoria Gabel and Louis Descotte (a French National) were waiting in neutral territory. The family group spent the next two years in Switzerland, first in Zurich, then in Geneva, before moving for short period to Barcelona. The Cortázars settled in Buenos Aires by the end of 1919.[3]

Once in Argentina, his parents divorced a few years later.[2] Cortázar spent most of his childhood in Banfield, a suburb south of Buenos Aires, with his mother and younger sister. The home in Banfield, with its backyard, was a source of inspiration for some of his stories.[4] Despite this, he wrote a letter to Graciela M. de Solá on December 4, 1963 describing this period of his life as "full of servitude, excessive touchiness, terrible and frequent sadness." He was a sickly child and spent much of his childhood in bed reading.[5] His mother selected what he read[citation needed], introducing her son most notably to the works of Jules Verne, whom Cortázar admired for the rest of his life. In the magazine Plural (issue 44, Mexico City, May 1975) he wrote: "I spent my childhood in a haze full of goblins and elves, with a sense of space and time that was different from everybody else's."

Cortázar obtained a degree as Elementary School Teacher at 18. He would later pursue higher education in philosophy and languages, although he never graduated from University of Buenos Aires. According to biographer Montes-Bradley in "Cortázar sin barba" (Random House Mondadori, Editorial Debate, 2005), Cortázar taught in at least two High Schools in Buenos Aires Province, one in the city of Chivilcoy, the other one in Bolivar. In 1938 he self-published a volume of sonnets under the pseudonym Julio Denis.[6] He later repudiated this volume. In a 1977 interview for Spanish TV he stated that publishing that book was his only transgression to the principle of not publishing any books until he was convinced that what was written in them was what he meant to say.[7] In 1944 he became professor of French literature at the National University of Cuyo. In 1949 he published a play, Los Reyes (The Kings), based on the myth of Theseus and the Minotaur.

In 1951, Cortázar, who was opposed to the government of Juan Domingo Perón,[2] emigrated to France, where he lived and worked for the rest of his life. From 1952 onward, he worked for UNESCO as a translator. The projects he worked on included Spanish renderings of Robinson Crusoe, Marguerite Yourcenar's novel Mémoires d'Hadrien, and stories by Edgar Allan Poe. He also came under the influence of the works of Alfred Jarry and the Comte de Lautréamont, and wrote most of his major works in Paris. In later years he became actively engaged in opposing abuses of human rights in Latin America, and was a supporter of the Sandinista revolution in Nicaragua.

Cortázar was married three times, to Aurora Bernárdez, to Ugnė Karvelis, and finally to Carol Dunlop. He died in Paris in 1984 and is interred in the Cimetière de Montparnasse, next to Carol Dunlop. The cause of his death was reported to be leukemia. 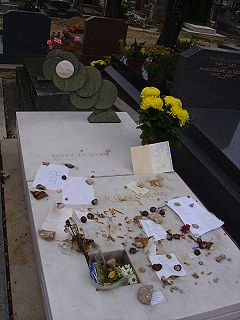 Cortázar wrote numerous short stories, collected in such volumes as Bestiario (1951), Final del juego (1956), and Las armas secretas (1959). English translations by Paul Blackburn of stories selected from these volumes were published as Blow-up and Other Stories by Pantheon Books (1967). The title of this collection refers to Michelangelo Antonioni's film Blowup (1967), which was inspired by Cortázar's story Las Babas del Diablo (literally, "The Droolings of the Devil", an Argentine expression for the long threads some spiders and insects leave hanging between the trees). Puerto Rican novelist Giannina Braschi used Cortázar's story as a springboard for the chapter called "Blow-up" in her bilingual novel "Yo-Yo Boing!" (1998) that features scenes with Cortázar's characters La Maga and Rocamadour. Chilean novelist Roberto Bolaño claimed Cortázar as a key influence on his novel The Savage Detectives: "To say that I'm permanently indebted to the work of Borges and Cortázar is obvious".[8] Cortázar's story "La Autopista del Sur" ("The Southern Thruway") influenced another film of the 1960s, Jean-Luc Godard's Week End (1967).[9]

Cortázar also published several novels, including Los premios (The Winners, 1960), Hopscotch (Rayuela, 1963), 62: A Model Kit (62 Modelo para Armar, 1968), and Libro de Manuel (A Manual for Manuel, 1973). Except for Los premios, which was translated by Elaine Kerrigan, the novels have been translated into English by Gregory Rabassa. The open-ended structure of Hopscotch, which invites the reader to choose between a linear and a non-linear mode of reading, has been praised by other Latin American writers, including José Lezama Lima, Giannina Braschi, Carlos Fuentes, Gabriel García Márquez, and Mario Vargas Llosa. Cortázar's use of interior monologue and stream of consciousness owes much to James Joyce and other modernists, but his main influences were Surrealism, the French Nouveau roman and the improvisatory aesthetic of jazz. This last interest is reflected in the notable story, "El perseguidor" ("The Pursuer"), which Cortázar based on the life of the bebop saxophonist Charlie Parker.[10] Cortázar also mentions Lawrence Durrell's The Alexandria Quartet several times in Hopscotch.[11] His first wife, Aurora Bernárdez, translated Durrell into Spanish while Cortázar was writing the novel.

Cortázar also published poetry, drama, and various works of non-fiction. He also translated Edgar Allan Poe's 1838 novel The Narrative of Arthur Gordon Pym of Nantucket into Spanish as Narracion de Arthur Gordon Pym. One of his last works was a collaboration with his third wife, Carol Dunlop, The Autonauts of the Cosmoroute, which relates, partly in mock-heroic style, the couple's extended expedition along the autoroute from Paris to Marseille in a Volkswagen camper nicknamed Fafner.

In Buenos Aires, a school, a public library, and a square in the neighbourhood of Palermo carry his name. The square is particularly well-known as a centre of a trendy and bohemian area with an important nightlife (sometimes referred to as "Plaza Serrano" or "Palermo Soho")

Mentioned and spoken highly of in Rabih Alameddine's novel, 'Koolaids: The Art of War', which was published in 1998.

Originally published in Spanish as "Ceremonias" (Barcelona, Seix Barral), title by which is widely known in Spanish literary circles, and in English (translated by Paul Blackburn) as End of the Game and Other Stories
A compilation of stories translated into English from the books Final del juego and Las armas secretas