Near the end of the DC vs. Marvel crossover event in 1996, Amalgam Comics released a series of one-shot comic books combining characters from the Marvel Universe with characters from the DC Universe. The first twelve Amalgam titles were released in a single week, temporarily replacing both publishers' regular releases. Half the comics in the event were published by Marvel Comics and half by DC Comics. A year later, the stunt was repeated, but without the crossover as background. Later, both publishers collected their issues into trade paperback collections.[1]

In the 24 Amalgam Comics titles printed, one-third of those printed included letter-columns by fictitious fans to give a larger background to the stories and to help give hints of what might happen in the next issue. The "fans'" hometowns were usually fusions of existing American cities.[2]

Assassins, written by Dan Chichester and illustrated by Scott McDaniel, featured two main characters, Catsai and Dare the Terminator. Despite their enmity, they team up to take on the Big Question and his gang.[3]

Doctor Strangefate was written by Ron Marz with art by José Luis García-López and Kevin Nowlan. The issue features the powerful mystic Doctor Strangefate. His comic also featured the character Access and highlights his adventures in between issues of the DC vs. Marvel miniseries.[4] This book was reprinted in the DC versus Marvel trade paperback due to its part in the overall story.

JLX was written by Gerard Jones and Mark Waid, with art by Howard Porter and John Dell. The members of the Judgment League Avengers whose powers are mutant in origin turn against their teammates and form their own team, JLX. They leave to find Atlantis. The JLX returned in another title in the 1997 series of Amalgam comics, titled JLX Unleashed.

Legends of the Dark Claw

Legends of the Dark Claw was written by Larry Hama with art by Jim Balent and Ray McCarthy. Dark Claw returned in another title in the 1997 Amalgam comics, titled Dark Claw Adventures. 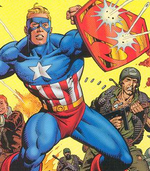 Super-Soldier was written by Mark Waid and illustrated by Dave Gibbons.[5]

An experimental infusion of alien DNA transforms the human Clark Kent into Super-Soldier, hero of World War II. After a suspended animation, he is revived in modern times. He fought against Green Skull, Ultra-Metallo and the terrorist organization Hydra.[3][6]

The main character also appeared in JLX as a member of the JLA, again a year later in Super-Soldier: Man of War, and again as part of the JLA in JLX Unleashed.

Bruce Wayne Agent of S.H.I.E.L.D. was written by Chuck Dixon with art by Cary Nord and Mark Pennington.

Bullets and Bracelets was written by John Ostrander and illustrated by Gary Frank.

Magneto and the Magnetic Men

Magneto and the Magnetic Men was written by Gerard Jones with art by Jeff Matsuda and Art Thibert. The characters featured here returned in the 1997 Magnetic Men featuring Magneto.

Speed Demon was written by Howard Mackie and James Felder with art by Salvador Larroca and Al Milgrom.

Spider-Boy was written by Karl Kesel with art by Mike Wieringo and Gary Martin. Spider-Boy, the titular character, is a clone whose gravity powers enable him to mimic the wall-crawling abilities of a spider. This character returned in another Spider-Boy title in the 1997 Amalgam comics, titled Spider-Boy Team-Up.

The team returned in another title in the 1997 Amalgam comics, titled Exciting X-Patrol.

Bat-Thing - Someone to Watch Over Me was written by Larry Hama with art by Rodolfo Damaggio and Bill Sienkiewicz. The titular character Bat-Thing attacked people in the street of New Gotham City, and the detective Clarck Bullock tried to protect the Bat-Thing's wife and daughter from the monster.[7]

Dark Claw Adventures was written illustrated by Ty Templeton and Rick Burchett. This "animated series" version of the Dark Claw comic used an art style that mirrored Batman: The Animated Series and was similar to the Batman Adventures comic. Lady Talia pursued the Dark Claw to avenge the killing of her father, Ra's A-pocalypse.[7]

Generation Hex was written by Peter Milligan with art by Adam Pollina. The comic featured a team of mutants, the Malforms, suffering prejudice and living by robbery in the Old West. Their leader, Jono Hex, helps them escape a trio of mutant-hunting robots sent by Marshal Trask and get revenge on his hometown Humanity.[7][2][8]

JLX Unleashed was written by Christopher Priest with art by Oscar Jimenez and Hanibal Rodriguez. This second outing of the JLX sees them joined by Amazon. The Hellfire League of Injustice summons up the dragon Fin Fang Flame to destroy all metamutants. The dragon decide to incinerate the entire humanity, since "All humanity, after all, is mutated to some extent". The Judgment League Avengers and the JLX ally to defeat it.[7]

Lobo the Duck was written by Alan Grant with art by Val Semeiks and Ray Kryssing.

The story revolves around the fearless, muscular, anti-hero bounty hunter Lobo the Duck and his shapeshifting canine sidekick Impossible Dawg who are investigating the murders of several Amalgam Comics superheroes, including Doctor Strangefate, Super-Soldier, Aqua Mariner, Dare the Terminator, and Hawkhawk.

Lobo only agrees to find the murderer(s) as the aforementioned heroes had paid him upfront. Lobo fights his way through Gold Kidney Lady, Doctor Bongface, and various other supervillains before he realizes that the end of the world is about to begin and only he can stop it.

Some other minor characters introduced in Lobo the Duck include Ambush the Lunatik, a fellow bounty hunter that was eaten by Lobo after angering him; Al Forbush, the owner of Al Forbush's Subterranean Diner; and Jonas Turnip. 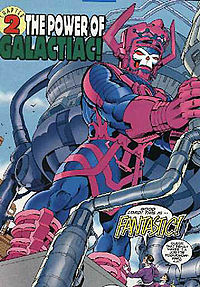 Galactiac, interior artwork from Challengers of the Fantastic #1 (Jun, 1997). Art by Tom Grummett.

Challengers of the Fantastic

Exciting X-Patrol was written by Barbara Kesel with art by Bryan Hitch and Paul Neary. The team fought against Brother Brood. This comic was dedicated to the memory of Mark Gruenwald, who had died one year previously from a heart attack.

Iron Lantern was written by Kurt Busiek with art by Paul Smith.

The Magnetic Men featuring Magneto was written by Tom Peyer with art by Barry Kitson and Dan Panosian. In addition to the title characters, this book also features Mister Mastermind, Quasimodox, Chemodam, and the Sinister Society.

The Sinister Society's members each represent various special metals from both universes. The members and their associated metals are:[10]

Spider-Boy Team-Up was written by "R.K. Sternsel" (an amalgam of the names of Roger Stern and Karl Kesel) with art by José Ladrönn and Juan Vlasco. In this comic, Spider-Boy teams up with characters based on Marvel and DC comics based in the far future and/or outer space, including the Legion of Galactic Guardians 2099.[2]

Thorion of the New Asgods

Thorion of the New Asgods was written by Keith Giffen and John Romita, Jr..