North Sea locks on the River Elbe at Brunsbüttel

The Kiel Canal (German: Nord-Ostsee-Kanal, NOK), known as the Kaiser-Wilhelm-Kanal until 1948, is a 98-kilometre (61 mi) long canal in the German state of Schleswig-Holstein.

The canal links the North Sea at Brunsbüttel to the Baltic Sea at Kiel-Holtenau. An average of 250 nautical miles (460 km) is saved by using the Kiel Canal instead of going around the Jutland Peninsula. This not only saves time but also avoids potentially dangerous storm-prone seas. According to the canal's website, it is the most heavily used artificial seaway in the world; over 43,000 vessels passed through in 2007, excluding small craft.[1]

Besides its two sea entrances, the Kiel Canal is linked, at Oldenbüttel, to the navigable River Eider by the short Gieselau Canal.[2]

The first connection between the North and Baltic Seas was constructed while the area was ruled by Denmark-Norway. It was called the Eider Canal, which used stretches of the Eider River for the link between the two seas. The Eiderkanal was completed during the reign of Christian VII of Denmark in 1784 and was a 43-kilometre (27 mi) part of a 175-kilometre (109 mi) long waterway from Kiel to the Eider River's mouth at Tönning on the west coast. It was only 29 metres (95 ft) wide with a depth of three metres (ten feet), which limited the vessels that could use the canal to 300 tonnes displacement.| 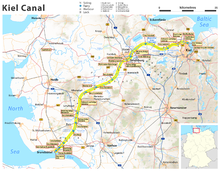 During the 19th century, after Schleswig-Holstein had come under the government of Prussia (from 1871 the German Empire) following the Second Schleswig War in 1864, a combination of naval interests — the German navy wanted to link its bases in the Baltic and the North Sea without the need to sail around Denmark — and commercial pressure encouraged the development of a new canal.

In June 1887, construction works started at Holtenau, near Kiel. The canal took over 9,000 workers eight years to build. On June 20, 1895, the canal was officially opened by Kaiser Wilhelm II for transiting from Brunsbüttel to Holtenau. The next day, a ceremony was held in Holtenau where Wilhelm II named it the Kaiser Wilhelm Kanal (after Kaiser Wilhelm I), and laid the final stone.[3] The opening of the canal was filmed by British director Birt Acres and surviving footage of this early film is preserved in the Science Museum in London.[4]

In order to meet the increasing traffic and the demands of the Imperial German Navy, between 1907 and 1914 the canal width was increased. The widening of the canal allowed the passage of a Dreadnought-sized battleship. This meant that these battleships could travel from the Baltic Sea to the North Sea without having to go around Denmark. The enlargement projects were completed by the installation of two larger canal locks in Brunsbüttel and Holtenau.

There are detailed traffic rules for the canal. Each vessel in passage is classified in one of six traffic groups according to its dimensions. Larger ships are obliged to accept pilots and specialised canal helmsmen, in some cases even the assistance of a tugboat. Furthermore, there are regulations regarding the passing of oncoming ships. Larger ship may also be required to moor at the bollards provided at intervals along the canal to allow the passage of oncoming vessels. Special rules apply to pleasure craft.

While most large, modern cruise ships cannot pass through this canal due to clearance limits under bridges, MS Norwegian Dream has special funnels and masts that can be lowered for passage. Swan Hellenic's Minerva, Fred Olsen Cruises' ship Balmoral, Oceania Cruises' Regatta, and MS Prinsendam of Holland America Line are able to transit the canal.

The German Navy’s sail training barque Gorch Fock was designed to allow lowering (telescoping) of the tops of her masts, specifically for the vessel to navigate Kiel Canal – otherwise the ship would be too tall for several bridges spanning the waterway.

Several railway lines and federal roads (Autobahnen and Bundesstraßen) cross the canal on eleven fixed links. The bridges have a clearance of 42 metres (138 ft) allowing for ship heights up to 40 metres (130 ft). The oldest bridge still in use is the Levensau High Bridge from 1893, however the bridge will have to be replaced in the course of a canal expansion already underway. In sequence and in the direction of the official kilometre count from west (Brunsbüttel) to east (Holtenau) these crossings are:

Local traffic is catered for by 14 ferry lines and a pedestrian tunnel. Most noteworthy is the “hanging ferry” (German: Schwebefähre) beyond the Rendsburg High Bridge. All ferries are run by the Canal Authority and their use is free of charge.

The board game Diplomacy recognises the Kiel Canal by allowing fleets to enter the region of Kiel from the west and exit to the east (or vice versa), which is not allowed in most of the game's other two-coast regions, such as Spain.[7]

Crime writer Emma Lathen's 1997 novel, "A Shark Out of Water", revolves around the murder of a Polish official who was championing the improvement of the Kiel Canal.