Home hemodialysis (HHD), is the provision of hemodialysis in the home of people with stage 5 chronic kidney disease. In the US home hemodialysis was the most common method of renal replacement therapy in the early 1970s before the introduction of the Federal ESRD program under Medicare. With routine payment for dialysis secured through Medicare incenter hemodialysis quickly became the most common form of renal replacement therapy. In the late 1970s with the advent of peritoneal dialysis, another form of home dialysis, HHD went into further decline. In 2002 HHD began a resurgence in the United States with the introduction of machines designed solely for home use.

People on home hemodialysis are followed by a nephrologist who writes the dialysis prescription and they rely on the support of a dialysis unit for back-up treatments and case management. Studies show that HHD improves patients' sense of well-being; the more they know about and control their own treatment the better they are likely to do on dialysis.[1] 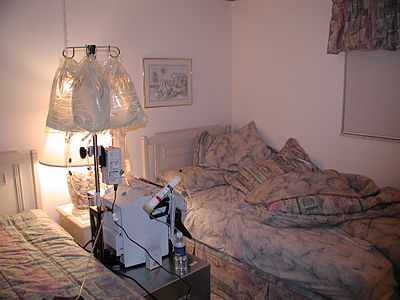 NxStage System One cycler, being used for hemodialysis with bags of dialysate.

There are three basic schedules of HHD and these are differentiated by the length and frequency of dialysis and the time of day the dialysis is carried out. They are as follows:

Thus an NHHD schedule results in a larger dose of hemodialysis per week, as do some SDHHD. More total time dialyzing, shorter periods between treatments and the fact that fluid removal speeds can be lower (thus reducing the symptoms resulting from rapid ultrafiltration), accounts for the advantages of these schedules over conventional ones.

A frequent NHHD schedule has been shown to have better clinical outcomes than a conventional schedule and evidence is mounting that clinical outcomes are improved with each increase in treatment frequency. For recent review articles on more frequent dialysis, see [2] and.[3]

Dialysis providers only stand to benefit from (3) (lower nursing costs) as the other costs (1) (poorer health) and (2) (lower productivity), as currently structured, are externalized to society. With the expensive training and hemodialysis equipment required, the return on investment is high only for long-term home hemodialysis patients.

Home hemodialysis started in the early 1960s. Who started it is in dispute. Groups in Boston, London, Seattle[20] and Hokkaidō all have a claim.

The Hokkaidō group was slightly ahead of the others, with Nosé's publication of his PhD thesis (in 1962), which described treating patients outside of the hospital for acute renal failure due to drug overdoses. In 1963, he attempted to publish these cases in the ASAIO Journal but was unsuccessful, which was latter described in the ASAIO Journal when people were invited to write about unconventional/crazy rejected papers.[21] That these treatments took place in people's homes is hotly disputed by Shaldon[22] and he has accused Nosé of a faulty memory and not being completely honest, as allegendly revealed by some shared Polish Vodka, many years earlier.

The Seattle group (originally the Seattle Artificial Kidney Center, later the Northwest Kidney Centers) started their home program in July 1964. It was inspired by the fifteen year old daughter of a collaborator's friend, who went into renal failure due to lupus erythematosus, and had been denied access to dialysis by their patient selection committee. Dialysis treatment at home was the only alternative and managed to extend her life another four years. Dr. Chris Blagg has stated that the first training predated the establishment of the home program: the "first home patient wasn’t part of our program at all, he was president of a big Indian corporation, lived in Madras, and he came to Seattle just before I came in ’63. He came in early ’63, again, with his doctor and his wife and Dr. Scribner trained them to do dialysis at home and they went home to Madras."[23]

In September 1964 the London group (led by Shaldon) started dialysis treatment at home. In the late 1960s, Shaldon introduced HHD in Germany.[24]

Home hemodialysis machines have changed considerably since the inception of the practice. Nosé's machine consisted of a coil (to transport the blood) placed in a household (electric) washing machine filled with dialysate. It did not have a pump and blood transport through the coil was dependent on the patient's heart. The dialysate was circulated by turning on the washing machine (which mixed the dialysate and resulted in some convection) and Nosé's experiments show that this indeed improved the clearance of toxins.

In the USA there has been a large decline in home hemodialysis over the past 30 years. In the early 1970s, approximately 40% of patients used it. Today, it is used by approximately 0.4%.[20] In other countries HNHD use is much higher. In Australia approximately 11% of ESRD patients use HNHD.[20]

The large decline in HHD seen in the 1970s and early 1980s is due to several factors. It coincides with the introduction and arise of continuous ambulatory peritoneal dialysis (CAPD) in the late 1970s, an increase in the age and the number of comorbidities (degree of "sickness") in the ESRD population, and, in some countries such USA, changes in how dialysis care is funded (which lead to more hospital-based hemodialysis).

Home night-time (nocturnal) hemodialysis was first introduced by Baillod et al.[25] in the UK and grew popular in some centers, such as the Northwest Kidney Centers, but then declined in the 1970s (coinciding with the decline in HHD). Since the early 1990s, NHHD has become more popular again. Uldall[26] and Pierratos [27][28] started a program in Toronto, which advocated long night-time treatments, (and coined the term 'nocturnal home hemodialysis') and Agar[9] in Geelong converted his HHD patients to NHHD. 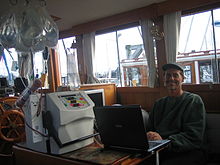 NxStage System One cycler, being used for hemodialysis with bags of dialysate.

The NxStage System One cycler uses far less dialysate per treatment with a maximum dialysate flow rate of 200 ml/minute but generally runs at rates less than 150 ml/minute. The NxStage System One can be used with bags of ultrapure dialysate - from 15 to 60 liters per treatment (see photo showing treatment in process). This allows the System One to be transportable; as of 2008 the company supports travel within the continental US and will assist travel to Alaska and Hawaii (travel to AK & HI will result in the patient having additional out of pocket costs). Generally, the supplies including the dialysate are delivered as they are scheduled to be used, either bimonthly or monthly but the amount of supplies can become a concern. The System One can also use a separate dialysate production device manufactured by NxStage - the PureFlow. The PureFlow uses a deionization process to create a 60 liter batch of dialysate. A batch has a 72 hour shelf life and is usually used for two or three treatments, although some patients are using the entire 60 liter batch for a single extended treatment.

Frequent "daytime" hemodialysis
Patients on frequent daytime hemodialysis have done well on short sessions (1.5 hours) given 6 times per week, although this would total 9 hours per week, and is fewer hours per week than most patients being dialyzed 3/week. When changing from a 3x/week to a 6x/week schedule, if total weekly time is left the same (each session length cut in half), patients typically will still remove a little bit more waste products initially than with conventional schedules, since the blood levels of toxins during the initial hour of dialysis are higher than in subsequent hours. Most patients treating themselves "daily" (6x/week) with daytime hemodialysis use session lengths of 2–3 hours. Longer session lengths give more benefit in terms of fluid and especially, phosphate removal. However, unless sessions are prolonged beyond 3–4 hours, almost all 6x/week patients will still require phosphate binders. Fluid and phosphate removal with "daily" dialysis are made more difficult because patients often feel better and increase protein (and thus also, phosphate) as well as fluid intake.

Nocturnal hemodialysis
When nocturnal dialysis is given 3 or 3.5 times (every other night) per week, the total weekly duration of dialysis is markedly prolonged, since each session typically lasts 6–8 hours, compared to 3–4 hours for conventional dialysis. This gives benefits in terms of fluid removal and phosphate removal, although about 1/2 to 2/3 of patients receiving this kind of treatment will still require phosphate binders. When such long nocturnal sessions are given 6x/week, in almost all patients phosphate binders can be stopped, and in a substantial number, phosphate needs to be added to the dialysate to prevent phosphate depletion. Because of the long weekly dialysis time, fluid removal is very well controlled, as the rate of ultrafiltration is quite low.

Measuring adequacy and minimum levels
Whereas adequacy of conventional dialysis is measured by urea reduction ratio URR or Kt/V, the question of adequacy of more frequent dialysis is based on opinion only and not on controlled trials. The KDOQI 2006 adequacy group, in their Clinical Practice Recommendations, suggested using the Standardized Kt/V as a minimum standard of adequacy for dialysis schedules other than 3x/week. A minimum standardized Kt/V value of 2.0 per week was suggested.