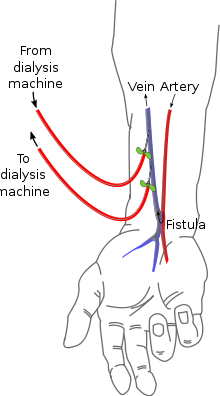 The procedure was invented by doctors Cimino and Brescia in 1966.[3] Before the Cimino fistula was invented, access was through a Scribner shunt, which consisted of a Teflon tube with a needle at each end. Between treatments, the needles were left in place and the tube allowed blood flow to reduce clotting. But Scribner shunts lasted only a few days to weeks. Frustrated by this limitation, Dr. James E. Cimino recalled his days as a phlebotomist (blood drawer) at New York City's Bellevue Hospital in the 1950s when Korean War veterans showed up with fistulas caused by trauma. Cimino recognized that these fistulas did not cause the patients harm and were easy places to get repeated blood samples. He convinced surgeon Kenneth Appell to create some in patients with chronic kidney failure and the result was a complete success. Scribner shunts were quickly replaced with Cimino fistulas, and they remain the most effective, longest-lasting method for long-term access to patients' blood for hemodialysis today.