Danny Granger, Jr. (born April 20, 1983) is an American professional basketball player for the Indiana Pacers of the NBA. He is mainly a small forward, though he does log time at the power forward position. [1] He is also able to initiate the team's offense and so is regarded as one who can play the point forward position. [2] Before his professional career, he went to Grace King High School in Metairie, Louisiana where he was a McDonald's All-American nominee before his senior year.[3] He was an academic student who scored a 30 on the ACT[4] and was offered admission to Yale University. He played for Bradley University and then transferred to University of New Mexico before his junior year.[5]

Granger graduated with a degree in civil engineering. 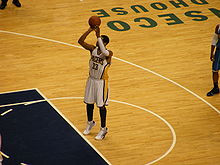 Granger was selected 17th overall in the 2005 NBA Draft by the Indiana Pacers,[7] as the organization included former Lobo Mel Daniels[8] and Hall of Famer Larry Bird, who was coached in college by the father of New Mexico Lobo Basketball, coach Bob King.[9]

In his first NBA season, Granger played in 78 regular season games, averaging 7.5 points and 4.9 rebounds per game, while making the All-NBA Rookie Second Team. He added 8.2 points and 5.2 rebounds in 6 playoff games.[5]

With the departure of Peja Stojaković[10] and arrival of Al Harrington[11] during the 2006 offseason, Granger became the Pacers' starting small forward for 2006–07. After the first 15 games, he became the first man off the bench.

Since a January 17, 2007 eight-player trade with the Golden State Warriors,[12] Granger started at the small forward and shooting guard spots, mainly due to the departure of Harrington. With the second and third scoring options (Harrington and Stephen Jackson, respectively) on the team gone, he was given more chances for scoring and averaged 13.9 points per game in 2006–07.[5]

On October 31, 2008, Granger and the Pacers agreed on a 5-year contract extension.[14] The contract pays him $9,930,500 starting in 2009–2010 and escalates ten percent each year, ending after the 2013–2014 season.[15] The finalization of the deal was announced that night, mere hours before the midnight deadline which, if passed without any agreement, would have made Granger a restricted free agent the following summer.

Following his breakout season in 2008-2009, the next season was a bit of a disappointment, marred by injuries and losses. On March 26, 2010, however, Granger scored a new career-high 44 points against the Utah Jazz.[19]

Granger has a younger brother, Scotty, who appeared on a reality TV show titled The One: Making a Music Star on ABC, in the summer of 2006. Scotty, an openly gay artist,[22] plays piano, guitar, flute, sax, piccolo, and several other instruments.[23] Scotty also won $50,000 on the ABC show Wipeout on June 10, 2009. Scotty is one of the 12 finalists on the 2011 news series on Bravo entitled Platinum Hit, a competition about songwriting.

Granger is also great-nephew of the "Queen of Gospel", Mahalia Jackson.[24]