Mono have released five studio albums. The band spent their early years, from 1999 to 2003, touring Asia, Europe, and America continuously, and released two studio albums, Under the Pipal Tree (2001) and One Step More and You Die (2002) on the Tzadik and Music Mine Inc. record labels, respectively. From 2004 to 2007, Mono signed to Temporary Residence Limited, released two more studio albums, Walking Cloud and Deep Red Sky, Flag Fluttered and the Sun Shined (2004) and You Are There (2006), and toured worldwide in their support. In 2008, the band took a break, returning one year later with a new studio album, Hymn to the Immortal Wind (2009), also on Temporary Residence Limited. During the tour that followed they recorded Holy Ground: NYC Live With The Wordless Music Orchestra which was released in 2010.

The band's style of instrumental rock music is influenced by the genres of experimental rock and shoegazing, as well as by both the classical and contemporary classical periods of classical music, and also by noise and minimalism. Mono's sound is characterised by the lead and rhythm guitars of Goto and Yoda respectively, both of whom make extensive use of reverb, distortion and delay effects. The band's live performances are noted for their intensity, both in the playing and in the dynamics.

In January 1999, Japanese Tokyo-native electric guitarist Takaakira Goto began composing music and spent the remainder of the year searching for other musicians with which to form an instrumental rock band; eventually recruiting long-time friend and fellow electric guitarist Yoda on rhythm guitar.[1] By December 1999, Tamaki Kunishi and Yasunori Takada had joined Mono on bass guitar and drum kit, respectively. The band played their first show in late January 2000, at Club 251 in Setagaya, Tokyo.[2] In May 2000, the band entered Rinky Dink Studio in Tokyo and recorded their first extended play with engineers Tetsuya Morioka and Toshiro Kai, which was later self-released in September 2000; a Japan-only release titled Hey, You on their own independent record label, Forty-4. The band spent the bulk of the year composing more music and performing live at various live houses around Tokyo, in the neighbourhoods of Setagaya, Shimokitazawa, and Shibuya. Mono also travelled to the United States to play a one-off show in November at the Mercury Lounge in New York; a show which was later described by Paul Wheeler of rockofjapan.com as having a "big beautiful sound that [...] naturally [expanded] through each song."[3]

Following the release of the Hey, You extended play, Mono spent the next year playing live shows throughout their native Japan, as well as playing several shows in New York and Sweden. The band also made an appearance at the 2001 South by Southwest music festival in Austin, Texas. Between performing in Japan, Mono recorded their first studio album, Under the Pipal Tree at Studio Take-1 and Forty-4 in Tokyo. The majority of the tracks were recorded live (a trend which the band would adopt for all subsequent studio albums) in one day, the recording session of which was funded by experimental American musician John Zorn, with the band handling production duties. The album featured two previously released tracks (from the Hey, You extended play), as well as six original compositions. The album was released worldwide through New York City record label Tzadik, owned and operated by John Zorn.

After the release of Under the Pipal Tree, the band spent the next year touring Japan and the United States, also visiting Germany and Taiwan in support of the album, as well as composing new material inspired by the tour. In June 2002, between shows in Japan, the band recorded their second studio album, One Step More and You Die at Little Bach and Sound City studios in Tokyo, with Mono again handling production duties. The album was released in Japan in October of that year on Japanese record label Music Mine Inc. The band spent most of 2003 touring in support of the album, returning to Japan, the United States, Sweden, and visiting Canada, Switzerland, Belgium, Hungary, the Netherlands, France, and the United Kingdom for the first time.

Mono's next release was a collaboration with Japanese musician Aki Onda; whom the band met while touring New York in 2002. The band, Onda, and several notable members of the New York experimental music scene (including DJ Olive, Jackie-O Motherfucker, and Loren Connors) remixed One Step More and You Die. The album, titled New York Soundtracks, was released in February 2004 on Human Highway, Mono's own record label, and a successor to Forty-4.

In January 2004, the band began a long partnership with Chicagoan recording engineer Steve Albini, recording their third studio album at Electrical Audio Engineering in Chicago, Illinois. The album, titled Walking Cloud and Deep Red Sky, Flag Fluttered and the Sun Shined was released in April 2004 on Human Highway in Japan, and on Rykodisk in Europe and Temporary Residence Limited in the United States later in the year. After the album's release, the band embarked upon a year-long tour of America, Asia, and Europe. 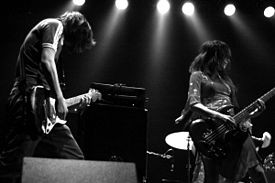 The band also spent 2005 touring Asia, America, and Europe composing music, and eventually returning to Electrical Audio Engineering in February and September to record their fourth studio album with Steve Albini. The album, titled You Are There was released in Japan in March 2006 on Human Highway, and on Temporary Residence Limited in the United States and Europe. Mono also collaborated with Japanese musician World's End Girlfriend in 2005, releasing a collaboration studio album in December of that year, on Human Highway, and with American band Pelican, releasing a split album with the band through Temporary Residence Limited in October 2005.

Mono spent 2006 and 2007 touring Asia, America and Europe in support of You Are There. In October 2006, the band returned to Electrical Audio Engineering and recorded a four-track extended play, which was released in April 2007 as part of Temporary Residence Limited's Travels in Constants series, titled The Phoenix Tree. In November 2006, the band released a two-track extended play titled Memorie dal Futuro through Vinyl Films, and also contributed a track to a Temporary Residence Limited compilation album, Thankful. In September 2007, the band released their first compilation album, compiling material from all previous extended plays, split albums, and compilations, titled Gone: A Collection of EPs 2000–2007, as well as the music documentary DVD, The Sky Remains the Same as Ever, documenting the worldwide tours of 2006 and 2007 and the recording of The Phoenix Tree extended play.

Hymn to the Immortal Wind: 2008–present 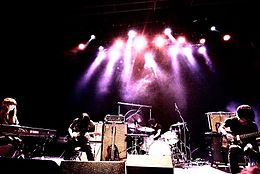 In 2008, the band took a year-long break from touring, spending the time composing new music and playing a handful of shows throughout the year, including an appearance at All Tomorrow's Parties in Somerset, England, curated by Explosions in the Sky in May. Mono returned to Electrical Audio Engineering in June and November 2008 to record their fifth studio album, Hymn to the Immortal Wind, which was later released in March 2009, and followed by a year-long tour of America and Eurasia. The band played a ten year anniversary show at the Society for Ethical Culture Hall in New York, United States on 8 May 2009, accompanied by the 24-piece Wordless Music Orchestra. The performance was recorded and later released as a both a live album and a DVD, named Holy Ground: NYC Live With The Wordless Music Orchestra, through Temporary Residence Limited in Europe and America, and Human Highway in Asia. The band has since announced that they will be taking another year-long break and going into "hibernation mode", returning to Japan to work on songs for a new album.

Although Mono's musical style has developed throughout their career, it has primarily been characterised by dynamic, guitar-based instrumental soundscapes, the majority of which are composed by lead guitarist Takaakira Goto, in an attempt to channel and express the emotions of joy and sorrow.[4] The band's style of music originally featured elements of minimalism and noise, and later developed to integrate more complex, orchestral arrangements and instrumentation.[5] Mono's music has sometimes been categorised as "post-rock", although the band has expressed discomfort with the term, identifying more with contemporary classical music.[4][6]

Mono are primarily a live band, and have toured worldwide several times. Their live show tends to feature intense and emotional playing by the band members, as well as using extreme dynamics (in crescendos as well as diminuendos) in their attempt to create an "unforgettable" live performance.[7] When recording their music, the band has always played live in the studio and, since 2004's Walking Cloud and Deep Red Sky, Flag Fluttered and the Sun Shined, worked with Chicagoan recording engineer Steve Albini, who they feel accurately captures a live band's "raw emotion to [magnetic] tape."[8]

Mono have drawn influence from various musical and non-musical sources throughout their career. When the band first formed, their main influences were American experimental rock band Sonic Youth and Anglo/Irish shoegaze band My Bloody Valentine when making Under the Pipal Tree and One Step More and You Die.[1] As the band broadened their musical tastes, starting with the album, Walking Cloud and Deep Red Sky, Flag Fluttered and the Sun Shined, they began to draw influence from music by sources such as German classical composer Ludwig van Beethoven, Italian film score composer Ennio Morricone, and later Polish minimalist composer Henryk Górecki, among others.[4] Lead guitarist Takaakira Goto has also acknowledged Danish film director Lars von Trier (in particular the 1996 film, Breaking the Waves) as a major influence since the band's formation, in terms of expressing the different depths and heights of emotion.[4]

In terms of instrumentation, Mono are a four-piece instrumental rock band. Goto, the group's frontman, is the lead guitarist and uses a Fender Jazzmaster through Boss, Danelectro, SiB, and Morley effects pedals, into a Fender Twin, a Marshall JCM 2000 head, and a Marshall cabinet for amplification.[9] Yoda, the rhythm guitarist, uses a Fender Stratocaster through Boss, Tech 21, Pro Co and Electro-Harmonix effects pedals, into a Fender Twin and sometimes a Fender Hot Rod DeVille for amplification.[10][11] Kunishi, the group's bass guitarist, pianist and occasional guitarist uses a Gibson EB-3 through Boss and Tech 21 effects pedals, into an Ampeg SVT head and various Sunn and Ampeg bass cabinets, as well as a Fender Rhodes, and a Fender Jazzmaster.[12][13][14][15] Takada, the drummer, uses a four-piece Ludwig drum kit,[16] and Paiste cymbals, as well as a Korg microKORG.[15][17]

As the band's career has progressed, they have incorporated string sections on record, beginning with Under the Pipal Tree, which featured use of cello, continuing with One Step More and You Die and Walking Cloud and Deep Red Sky, Flag Fluttered and the Sun Shined which both featured string quartets, and You Are There, which featured a string quintet. On Hymn to the Immortal Wind, the band made use of a 28-piece chamber orchestra.