The Bunimovich stadium is a chaotic dynamical billiard

A billiard is a dynamical system in which a particle alternates between motion in a straight line and specular reflections from a boundary. When the particle hits the boundary it reflects from it without loss of speed. Billiard dynamical systems are Hamiltonian idealizations of the game of billiards, but where the region contained by the boundary can have shapes other than rectangular and even be multidimensional. Dynamical billiards may also be studied on non-Euclidean geometries; indeed, the very first studies of billiards established their ergodic motion on surfaces of constant negative curvature. The study of billiards which are kept out of a region, rather than being kept in a region, is known as outer billiard theory.

Billiards capture all the complexity of Hamiltonian systems, from integrability to chaotic motion, without the difficulties of integrating the equations of motion to determine its Poincaré map. Birkhoff showed that a billiard system with an elliptic table is integrable.

The Hamiltonian for a particle of mass m moving freely without friction on a surface is:

where V(q) is a potential designed to be zero inside the region Ω in which the particle can move, and infinity otherwise:

This form of the potential guarantees a specular reflection on the boundary. The kinetic term guarantees that the particle moves in a straight line, without any change in energy. If the particle is to move on a non-Euclidean manifold, then the Hamiltonian is replaced by:

where gij(q) is the metric tensor at point

. Because of the very simple structure of this Hamiltonian, the equations of motion for the particle, the Hamilton–Jacobi equations, are nothing other than the geodesic equations on the manifold: the particle moves along geodesics.

Hadamard's billiards concern the motion of a free point particle on a surface of constant negative curvature, in particular, the simplest compact Riemann surface with negative curvature, a surface of genus 2 (a two-holed donut). The model is exactly solvable, and is given by the geodesic flow on the surface. It is the earliest example of deterministic chaos ever studied, having been introduced by Jacques Hadamard in 1898.

Artin's billiard considers the free motion of a point particle on a surface of constant negative curvature, in particular, the simplest non-compact Riemann surface, a surface with one cusp. It is notable for being exactly solvable, and yet not only ergodic but also strongly mixing. It is an example of an Anosov system. This system was first studied by Emil Artin in 1924. 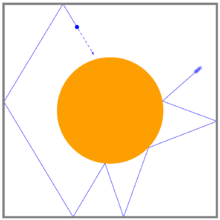 A trajectory in the Sinai billiard

The table of the Sinai billiard is a square with a disk removed from its center; the table is flat, having no curvature. The billiard arises from studying the behavior of two interacting disks bouncing inside a square, reflecting off the boundaries of the square and off each other. By eliminating the center of mass as a configuration variable, the dynamics of two interacting disks reduces to the dynamics in the Sinai billiard.

The billiard was introduced by Yakov G. Sinai as an example of an interacting Hamiltonian system that displays physical thermodynamic properties: all of its possible trajectories are ergodic and it has a positive Lyapunov exponent. As a model of a classical gas, the Sinai billiard is sometimes called the Lorentz gas.

Sinai's great achievement with this model was to show that the classical Boltzmann–Gibbs ensemble for an ideal gas is essentially the maximally chaotic Hadamard billiards.

The table called the Bunimovich stadium is a rectangle capped by semicircles. Until it was introduced by Leonid Bunimovich, billiards with positive Lyapunov exponents were thought to need convex scatters, such as the disk in the Sinai billiard, to produce the exponential divergence of orbits. Bunimovich showed that by considering the orbits beyond the focusing point of a concave region it was possible to obtain exponential divergence.

with the piece-wise smooth boundary Γ. On the boundary Γ the velocity of point is transformed as the particle underwent the action of generalized billiard law. GB were introduced by Lev D. Pustyl'nikov in the general case,[1] and, in the case when Π is a parallelepiped[2] in connection with the justification of the second law of thermodynamics (the law of entropy increase). From the physical point of view, GB describe a gas consisting of finitely many particles moving in a vessel, while the walls of the vessel heat up or cool down. The essence of the generalization is the following. As the particle hits the boundary Γ, its velocity transforms with the help of a given function f(γ,t), defined on the direct product

is the real line,

is a point of the boundary and

is time), according to the following law. Suppose that the trajectory of the particle, which moves with the velocity v, intersects Γ at the point

at time t * . Then at time t * the particle acquires the velocity v * , as if it underwent an elastic push from the infinitely-heavy plane Γ * , which is tangent to Γ at the point γ, and at time t * moves along the normal to Γ at γ with the velocity

. We emphasize that the position of the boundary itself is fixed, while its action upon the particle is defined through the function f.

We take the positive direction of motion of the plane Γ * to be towards the interior of Π. Thus if the derivative

, then the particle accelerates after the impact.

the interaction with the boundary will force the particle to leave it.

, the generalized billiard coincides with the classical one.

This generalized reflection law is very natural. First, it reflects an obvious fact that the walls of the vessel with gas are motionless. Second the action of the wall on the particle is still the classical elastic push. In the essence, we consider infinitesimally moving boundaries with given velocities.

It is considered the reflection from the boundary Γ both in the framework of classical mechanics (Newtonian case) and the theory of relativity (relativistic case).

The quantum version of the billiards is readily studied in several ways. The classical Hamiltonian for the billiards, given above, is replaced by the stationary-state Schrödinger equation Hψ = Eψ or, more precisely,

is the Laplacian. The potential that is infinite outside the region Ω but zero inside it translates to the Dirichlet boundary conditions:

As usual, the wavefunctions are taken to be orthonormal:

Curiously, the free-field Schrödinger equation is the same as the Helmholtz equation,

This implies that two and three-dimensional quantum billiards can be modelled by the classical resonance modes of a radar cavity of a given shape, thus opening a door to experimental verification. (The study of radar cavity modes must be limited to the transverse magnetic (TM) modes, as these are the ones obeying the Dirichlet boundary conditions).

The semi-classical limit corresponds to

which can be seen to be equivalent to

, the mass increasing so that it behaves classically.

As a general statement, one may say that whenever the classical equations of motion are integrable (e.g. rectangular or circular billiard tables), then the quantum-mechanical version of the billiards is completely solvable. When the classical system is chaotic, then the quantum system is generally not exactly solvable, and presents numerous difficulties in its quantization and evaluation. The general study of chaotic quantum systems is known as quantum chaos.

A particularly striking example of scarring on an elliptical table is given by the observation of the so-called quantum mirage.

The most practical application of theory of quantum billiards is related with double-clad fibers. In such a fiber laser, the small core with low Numerical Aperture confines the signal, and the wide cladding confines the multi-mode pump. In the paraxial approximation, the complex field of pump in the cladding behaves like a wave function in the quantum billiard. The modes of the cladding with scarring may avoid the core, and symmetrical configurations enhance this effect. The chaotic fibers [5] provide good coupling; in the first approximation, such a fiber can be described with the same equations as an idealized billiard. The coupling is especially poor in fibers with circular symmetry while the spiral-shaped fiber—with the core close to the chunk of the spiral—shows good coupling properties. The small spiral deformation forces all the scars to be coupled with the core.[6]