Margosatubig is a 3rd class municipality in the province of Zamboanga del Sur, Philippines. According to the 2007 census, it has a population of 39,012 people in 6,560 households. 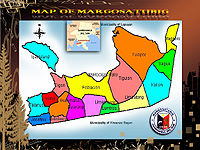 Margosatubig is politically subdivided into 17 barangays. 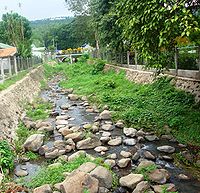 The Subanens were believed to be the first people to have settled in this land, right near the swift flowing river that now traverse the Margosatubig Pilot School and Guiwan district. “Malagus Tubig” was the original name of the town, which was taken after the swift river current that kept changing its course towards the mouth of the Dumanquillas Bay. In the 15th century, the Spaniards arrived and found that its bay is a natural refuge from bad waether for their ships. Soon it became their choice settlement changing Malagus Tubig to its present name Margosatubig. They built a huge stone fort on top of a hill that served as their bastion against Moro pirates who used to raid the settlements along the Dumanquillas Bay and its vicinity. The fort was known as Cotta Heights. In 1963, it was demolished and is now the site of Pax High School. The Spaniards reigned for years and left as their heritage most evidently, the Chavacano dialect. Suffice it to say that more than a hundred years ago, Margosatubig already existed as a settlement of migrants and natives in the 19th century. 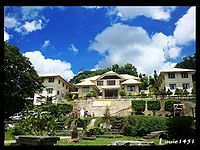 From 1917 to 1936, Margosatubig stayed as a municipal district of the city of Zamboanga. During the Commonwealth Government and by virtue Executive Order No. 17 dated December 23, 1936 signed by President Manuel L. Quezon, Margosatubig finally became a regular and distinct municipality with eight original barrios. It can be said that Margosatubig is the oldest town in Zamboanga del Sur; older even than the undivided Province of Zamboanga.

In 1950, the barrios of Punta Flecha, Pitogo, Qugbay, Balong-balong, Libertad and Dumanguilas was transferred to the newly-created town of Dimataling[1]

Margosatubig, in spite of being a pioneer town, still remained isolated and reachable only by sea craft. In 1976, it was finally opened to the rest of Zamboanga del Sur by an asphalt road connecting it to Pagadian. This was facilitated by the Zamboanga del Sur Development Project undertaken by the Philippine-Australian Development Assistance Programme (PADAP), and its Electrification by ZAMSURECO-1 followed in 1979.

Margosatubig has come a long way from the settlement that it was 100 years ago. After giving birth to so many towns, Margosatubig today has retained a total land area of 11,169 hectares. It is a 3rd class municipality with 17 barangays that is home to 39,012 Margosanons of various breed and creed.