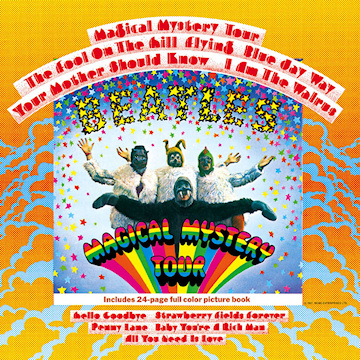 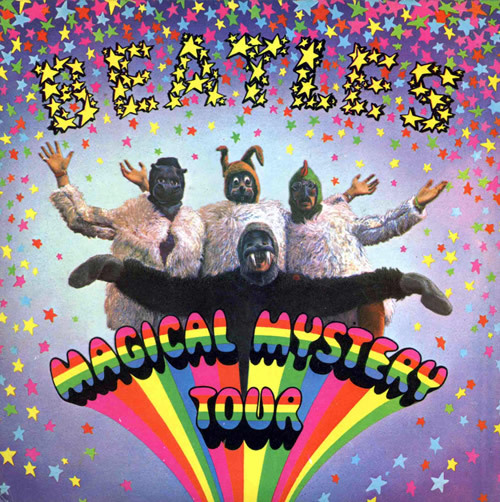 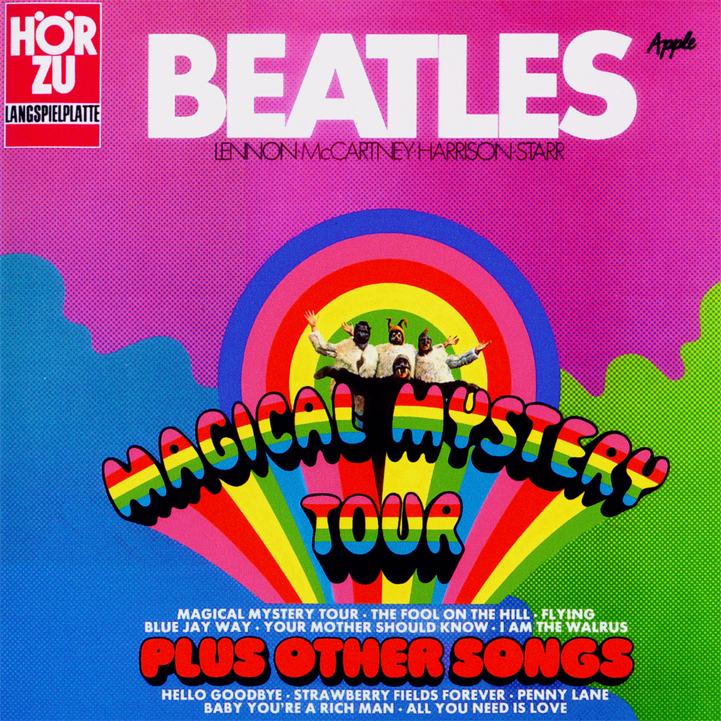 "Magical Mystery Tour" is the name of the 11-song and six-song by the English rock band , first released in late 1967. It is the soundtrack to a one-hour that was originally aired, in black and white, in the UK in 1967. Initially released as an EP in the UK, the recording was expanded to a full album on subsequent U.S. release, adding several recent singles to the B-side.

While the songs on the EP proved popular, critical and popular response to the television film proved negative. Plans to air it on ABC television in the U.S. were cancelled, and "Magical Mystery Tour" was first shown in the United States only in a special showing as a fundraiser for the in 1968. This was held at the in . Fact|date=July 2008 There was no other showing in the U.S. until 1974, as a theatrical release on the and college circuits, both of which were mainly underground.

History of the project

After "", wanted to create a film based upon the Beatles and their music. The film was to be : various "ordinary" people (including 's uncle Charlie) were to travel on a bus and have unspecified "magical" adventures, in the manner of 's .

The "Magical Mystery Tour" movie was made, but the hoped-for "magical" adventures never happened. During the filming, an ever greater number of cars followed the hand-lettered bus, hoping to see what its passengers were up to, until a running traffic jam developed. The spectacle ended after Lennon angrily tore the lettering off the sides of the bus.

"Magical Mystery Tour" was the first Beatles film project following the death of manager in August 1967, and there has been much speculation that the absence of Epstein's judgement contributed to its undisciplined production, as seen, for instance, in the absence of a and professional direction. The film originally appeared twice on over the 1967 Christmas holidays (primarily in black and white), but was savaged by critics on its release

The movie's was far more favourably received, and was nominated for a for best album in 1968. [cite web | last = | first = | url = http://abbeyrd.best.vwh.net/grammy.htm | title = The Beatles' Grammy and Academy and Emmy Award Nominations | format = | work = | publisher =abbeyrd.best.vwh.net | accessdate = 2007-11-20] and reached number 1 in the U.S for eight weeks. It was released in the UK in December 1967 as a . The American version was released in late November 1967 as an LP; its cover depicts the EP's artwork in an orange border, with a list of song titles above it. Capitol Records released "Magical Mystery Tour" as full-length album because EPs were not as popular in the US as they were in the UK. The "Magical Mystery Tour" LP was divided into two halves: The first side was the film soundtrack, and the second side was a collection of A- and s released in 1967.

The first side (containing the same songs as the British EP, but in a different running order), is a prime example of music from the , opening with the grandly rollicking title track, followed by McCartney's wistful ""; "Flying", one of only two commercially released Beatles up until that time (the first being the very early, and often forgotten Harrison-Lennon composition ""); "", an evocative mood piece by ; and the nostalgic "."

Rounding out side one, "" — full of crashing s and dubbed vocals — is one of the Beatles' more startling, creations. The lyrics, filled with maddening juxtapositions of words and phrases, were Lennon's sardonic response to learning that an English master at his , , was requiring his students to analyse Beatles songs. Lennon was particularly inspired by "Alice in Wonderland" during this period and the title comes from "".

The songs on side two were the band's non-album singles from the period. To keep to its release schedule, used a stereo simulator on the master tapes of the last three songs, rather than waiting for the stereo tapes to be sent over from Britain. Even so, the seemingly random choice of songs showed the band at its creative peak.

Side two is anchored by two starkly contrasting, semi-autobiographical songs: Lennon's "" and McCartney's "". Originally released as a double A-side single, Lennon's "Strawberry Fields" was a surreal account of childhood memories, while McCartney's "Penny Lane" was more light-hearted. Both songs were recorded at the beginning of the "Sgt. Pepper" sessions, but had been left off that album, a decision that producer later regretted. [cite web | last = | first = | url = http://www.rockandpopshop.com/articles-details.php?cat=Classic+Hits&id=65 | title = Strawberry Fields Forever | format = | work = | publisher =Rock and Pop Shop | accessdate = 2007-11-20]

The remaining tracks on side two include McCartney's counter (and A-side) to "I Am the Walrus" — the relentlessly upbeat, "", and the Lennon-McCartney collaboration "" (the first song recorded specifically for The Beatles' animated film "Yellow Submarine", which would be released in theatres one year later). The LP concludes with Lennon's jaunty anthem "" — the centrepiece of the broadcast — which coincided with 1967's and encapsulated the sentiments of the movement.

When standardising The Beatles' releases for in the late 1980s, the American LP version (which was imported into the UK, peaked on the British album charts at #31 as an American import, and was issued by in Britain in 1976) was included with the British album line-up instead of the British EP, with true stereo recordings replacing the earlier processed ones. (The true-stereo version of the "Magical Mystery Tour" LP was first issued in in 1971, but the 1976 Parlophone issue used the Capitol masters with the fake stereo.) Capitol quietly reissued the "Magical Mystery Tour" LP using the German masters in the US with catalogue number C1-48061 in true stereo. The remaining Beatles non-LP single sides were compiled as "" and "".

Although the British version of the LP released in 1976 used the same fake stereo on the last three songs as the Capitol LP, it did feature “I am the Walrus” with the intro riff repeated six times rather than the American LP’s four times.

All songs credited to , except where noted.

succession box
before = ""
by
title = "Billboard" 200 number-one album
years = - ,
after = "Blooming Hits" by Paul Mauriat and His Orchestra