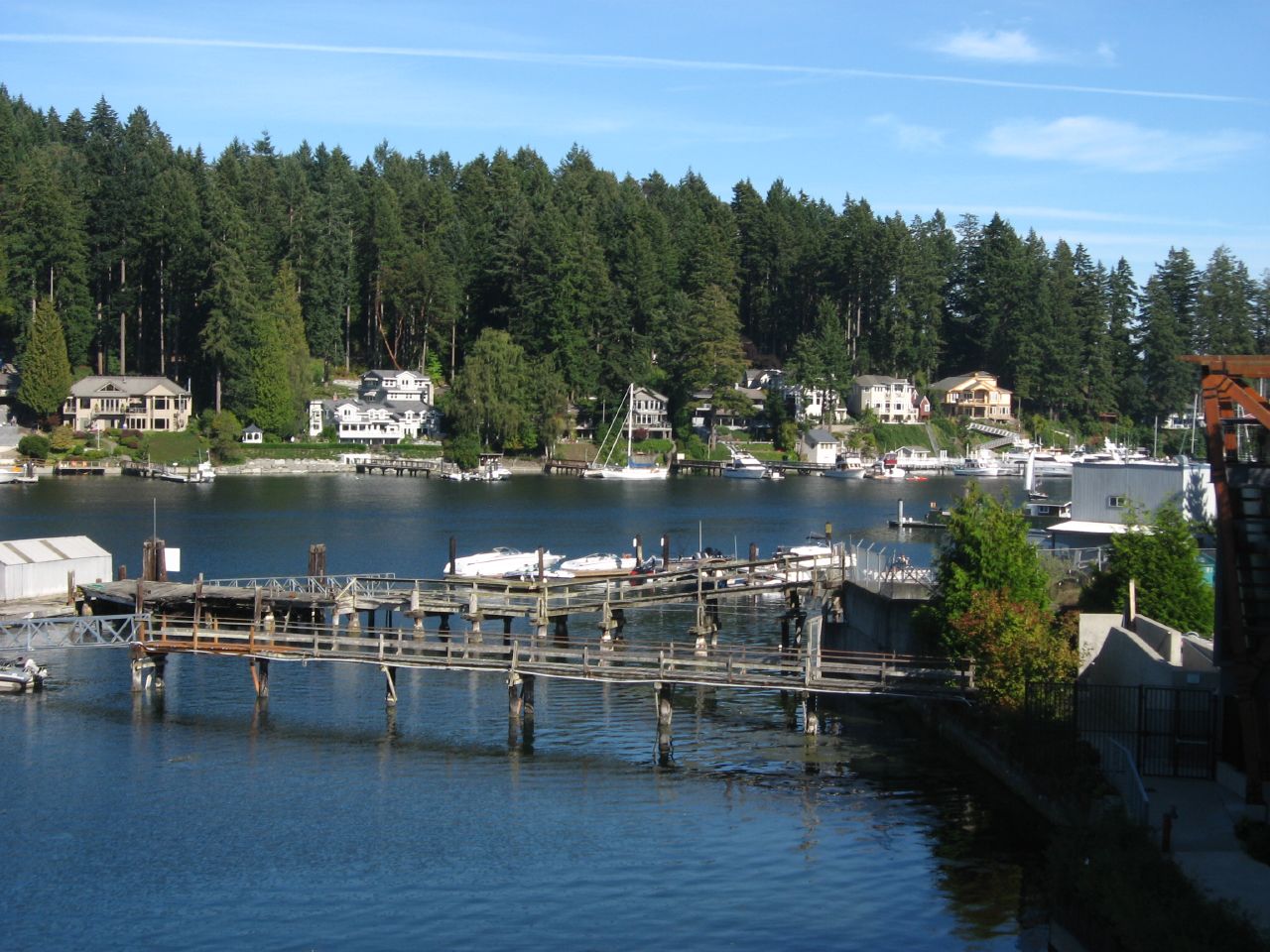 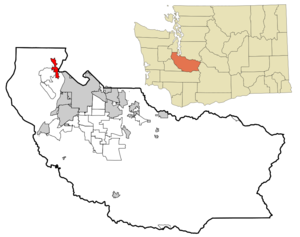 Gig Harbor is known as the gateway to the . Due to its close access to several state and city parks, and historic waterfront that includes boutiques and fine dining, it has become a popular tourist destination. Gig Harbor is located along State Route 16, about six miles (10 km) from its origin at Interstate 5, over the . An $849 million project to add a second span to the bridge was recently completed. [ [http://www.wsdot.wa.gov/projects/sr16narrowsbridge/ WSDOT - SR 16, Tacoma Narrows Bridge Project ] ] During off-peak traffic times, Tacoma can be reached in 20 minutes and Seattle in less than an hour.

Based on per capita income, Gig Harbor ranks 49th of 522 areas in the state of Washington to be ranked.

Gig Harbor was named by Captain Charles Wilkes. During a heavy storm, the captain brought his gig (small boat) into the harbor for protection. Later, Captain Wilkes named the sheltered bay Gig Harbor.

1867 brought fisherman Samuel Jerisich to the Gig Harbor area, along with many other immigrants from Sweden, Norway, and Croatia.

Gig Harbor was officially incorporated on , . Commercial fishing, boat building, and logging dominated the economy until the construction of the first Tacoma Narrows Bridge in 1940. Until then, the primary method of transportation between Gig Harbor and the economic center of nearby Tacoma was by steamship. Starting in 1836 steamships started plying the waters of Puget Sound and quickly developed into what was eventually dubbed "The Mosquito Fleet." Gig Harbor, isolated from Tacoma and Seattle by Puget Sound and the Tacoma Narrows, could not be reached by automobile or horseback except via a very long and arduous trip south around Puget Sound and Hammersly Inlet. Unfortunately, the boom was to be short lived as the first bridge collapsed just months after it was completed. The resource demands of World War II prevented another bridge from being built until 1950. Between the time when the first bridge collapsed and when the second bridge was completed, a state run ferry service delivered drivers directly into downtown Gig Harbor. Remains of the ferry dock can still be seen just outside the mouth of the harbor at the Southeast end of Harborview Drive. The area has been turned into a small park where the public can see a panoramic view of the Cascade Mountains, Pt. Defiance, and Mt. Rainier. After the completion of the replacement bridge in 1950, Gig Harbor and the surrounding area quickly began to develop as a suburb of neighboring Tacoma. First the area saw substantial residential development as families retreated from Tacoma in favor of the tree-lined neighborhoods and waterfront lots available on the Gig Harbor Peninsula. What had once been summer cabins became primary residences for people who commuted daily over the bridge to Tacoma. Medium sized housing development sprang up across the peninsula. The 1980s and 1990's saw substantial retail development near State Route 16 to service the growing residential population, shifting the economic center of Gig Harbor out of downtown. For some time, city leaders were unsure how to handle the growth while maintaining the character of the city. Ultimately, the city decided to aggressively annex the surrounding rural areas and convert them into high-density commercial and housing districts, forever changing the rural character of the area but assuring that little new development happens in the historic downtown area, preserving its history and charm. By the 1970s, local merchants had begun actively promoting the downtown area for its historic value, and tourism became prominent on the list of economic engines in Gig Harbor. Today, downtown Gig Harbor is a very active place for tourists with shopping, dining, and recreation on every block. The last large swath of undeveloped waterfront property at the South end of downtown, was recently developed into the headquarters of the Russel Foundation, named for George Russel, founder of Russel Financial.

Today, despite a long history of boat building, very little manufacturing exists in Gig Harbor. The only remaining boatbuilder in Gig Harbor is Gig Harbor Boatworks, which builds rowing and sailing dinghies in classic style using modern materials. Until recently, Tiderunner Boats maintained a manufacturing facility at the North end of the bay. The historic Skansie boatyard is now primarily a maintenance facility for yachts and pleasure craft. The Glein/Eddon/Gig Harbor boatyard was recently purchased by the city after spending many years sitting idle. The city intends to use it as a working waterfront museum.

Commercial fishing is still of great cultural, if somewhat lesser economic, importance to Gig Harbor, and many commercial fishing boats make Gig Harbor their home port. Most, however, do not rely on Puget Sound to gather their catch, rather, finding it more profitable to venture north to Alaska to fish in the Summer. Gig Harbor's fishing fleet still gathers the first weekend in June (during the Maritime Gig Festival) in the center of the bay for the annual Blessing of the Fleet ceremony. In recent years, due to the dwindling number of remaining fishing boats, pleasure craft have been allowed to participate in the ceremony, somewhat lessening its authenticity, but increasing it's visibility and participation.

A new Tacoma Narrows Bridge has been built alongside the existing bridge and opened July 2007, doubling past capacity. With it will come new economic challenges and benefits for the city of Gig Harbor and the surrounding community.

There are a number of attractions for locals and tourists alike to enjoy in Gig Harbor.

As the first destination on the Kitsap Peninsula after crossing the Narrows Bridge, this quaint Maritime Village is a favorite destination for people all over the world. This is a city that has preserved its history but also has many events that make this a vibrant community with incredible scenery, galleries, upscale shops, restaurants, beautiful gardens and many recreational activities.

A popular restaurant in Gig Harbor is The Tides Tavern. Located at the South end of downtown on Harborview Drive, this tavern has been around for decades. It stands on pilings built over the waters of Gig Harbor Bay and provides outdoor, as well as indoor seating for patrons. Enjoying a meal on the waterside deck is a great opportunity to watch boats enter and leave the harbor. On summer days, there is a non-stop parade of boats passing in front of the deck. The Tides Tavern also has its own private (but for public use) dock so that patrons may arrive by boat. In the summer, many boats will spend their entire day tied alongside the dock while their owners socialize with other boaters and bar patrons.

Immediately adjacent to the Tides Tavern is the Russell Foundation Building; one of Gig Harbor's most aesthetically pleasing projects in recent years. The building is built mostly below street level, so from the street you can walk directly onto its garden like public roof space which provides views of the harbor and educates visitors about Gig Harbor's history.

A couple blocks north on Harborview Drive is Jerisich Park. This park, combined with the adjacent Skansie Brothers Park, is a large, open, waterfront space with grass, decks, benches, and a covered Pavilion for community events. It is also home to the Fisherman Memorial, one of Gig Harbor's popular landmarks. This large bronze statue, which depicts a fisherman hauling in his catch, was commissioned in memory of Gig Harbor's fishermen, with special gratitude to those who lost their lives at sea. The parks often play host to fairs and events ranging from the annual Holiday tree lighting ceremony and Blessing of the Fleet, to musical concerts and art festivals. There is also a public use moorage dock where boaters can stay, free of charge, for a limited time.

At the mouth of the harbor a short sand spit is open to the public and is the site of a red navigational hazard light built into a miniature lighthouse model constructed to resemble the quaint lighthouses of yore. The beach is public, but access is difficult and parking is limited.

Gig Harbor City Park (aka [http://www.cityofgigharbor.net/html/Parks/Crescent%20Creek%20Park.html Crescent Creek Park] ) offers a variety of activities, and is especially geared toward larger groups and families. A children's play area features modern equipment to climb and play on, as well as swings for infants. The park also offers a baseball diamond in the upper area of the park, a basketball court and tennis courts. GH City Park is adjacent to a stream as well and has teaching plaques on stream conservation. A field in the lower part of the park offers picnic benches and recreational area for informal games and sports. There is a large wooden picnic shelter with fresh water and wood stoves. The park is popular in the summer for family reunions, picnics, and group gatherings.

The is the district covering the city of Gig Harbor and the Peninsula.

At the state level, Gig Harbor is part of the 26th Legislative District - which runs from the Tacoma Narrows in the south to Bremerton in the north. It is represented in the Washington State Legislature by Senator Derek Kilmer (D - Gig Harbor), Representative Pat Lantz (D - Raft Island) and Representative Larry Seaquist (D - Gig Harbor).

At the congressional level, Gig Harbor is part of Washington's 6th Congressional District. It is represented by Congressman Norm Dicks and Senators Patty Murray and Maria Cantwell.

*Scenes from the movie "", with , were filmed in Gig Harbor.
*Actor graduated from
*Actress lived with her grandmother in Gig Harbor, Wa