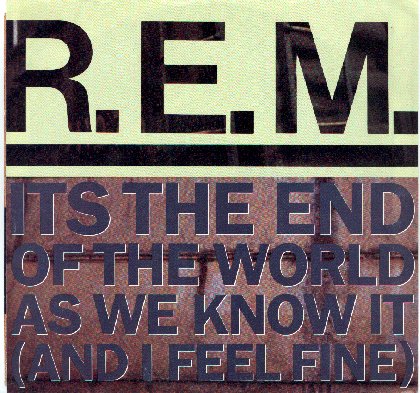 The song originated from a previous, unreleased, R.E.M. song called "PSA", which is short for "". The two songs are very similar in melody and tempo. "PSA" was itself later released as a single in 2003, under the title "Bad Day". In an interview with Guitar World magazine in the early 1990s, R.E.M. guitarist Peter Buck indicated that one of the primary inspirations of "End of the World" was Bob Dylan's "".

The music video was directed by James Herbert, who worked with the band on several other videos in the late 1980s. It depicts a young skateboarder (Noah Ray) rifling through an abandoned, collapsing farmhouse and displaying the relics that he finds to the camera.

The track is known for its quick flying lyrics taking the form of what appears to be a stream of consciousness rant with a number of diverse references, including a quartet of individuals with the initials "L.B." (In a 1990s interview with Musician Magazine, R.E.M. singer claimed that the "L.B." references came from a dream he had in which he found himself at a party surrounded by famous people who all shared these initials.)

Among the references are:

Since it was written, it was used as the show closer at the large majority of the live shows that R.E.M. performed. However, for the 2004/2005 "" tour, it was dropped from the set almost entirely, only played twice in the whole tour. On it was used to open the show for the first time ever in response to the outcome of the United States presidential election two days earlier. They also played it during the encore of the re-scheduled Hyde Park concert at the very end of the tour in summer 2005. The replacement show closer for the tour was their 1992 hit, "Man on the Moon". [ [http://members.iinet.net.au/~darryl74/2004.html R.E.M. Timeline - 2004/05 Concert Chronology ] ]

*, who was "discovered" by R.E.M.'s Michael Stipe, recorded a very loose cover of the song for the 1992 R.E.M. tribute album "Surprise Your Pig". Chesnutt's version uses a completely different structure and melody from the original and only uses fragments of its lyrics, most notably the opening line "That's great, it starts with an earthquake," which is repeated throughout the song.
* covered the song in a slow, dancy version. It's available on a compilation called "Winter Chill 06.02."
*Italian rock singer Ligabue covered the song in 1995, maintaining the same music but writing brand new Italian lyrics; the song was now titled "A Che Ora È La Fine Del Mondo?" ("At What Time Will The End Of The World Be?").
*Taking a cue from the "speed it up a notch" lyric in the song, Newfoundland folk-rockers covered the song on their 1997 album "Play" though at a much faster pace (under the title "End of the World"). Their version is a minute and a half shorter than R.E.M.'s, yet still contains all the verses.
* covered the song on their 1997 live album "", describing it as "a little ditty from Georgia."
*The band has also covered the song in concert, notably in reference to for the New Year's celebration in 1999.
* covered the song during their New Year's Eve run in Chicago on , .
*The band covered the song on their 2001 album "".
*The band the included their version as a hidden bonus track on their 2002 album "Hurry Up and Wait".
*On , , began their song "" with an excerpt of the song.
*Spanish band used the song to close the concerts of its 2007 tour.
*The song was also covered in 2004 by the band on their second album Unclean
*Rapper loosely sampled the song in "As We Know It," recorded on his 2006 album "".
*It was featured as a cover for the video game .

* The cult science-fiction comedy "" made a few references to this song throughout its eleven-season run; for example, a moment in episode #703 - involved a wizard saying, "Thinking I was the end of your quest,", with in-theater character quipping "...As we know it, and I feel fine."
* It has been reported that Stipe wrote the song after dreaming that he was at a birthday party where all the other guests had the initials L.B. ["Michael Stipe wrote this after having a dream in which he was at a birthday party and everybody there had the initials L.B." cite web | last = Ventre | first = Michael
title = Turn up the volume and cast your vote: Songs to inspire you for Election Day 2004
publisher =
url = http://www.msnbc.msn.com/id/6362112/
date = 2005-10-29
accessdate = 2006-09-01
archiveurl = http://web.archive.org/web/20041104045400/http://www.msnbc.msn.com/id/6362112/
archivedate = 2004-11-04] , hence ", , and . birthday party, , , boom!"
* This song was the first song played on the , OH "107.9 The End," ["This song was the first song played on the Cleveland, OH radio station 107.9 "The End"" cite web | last = Blankenburg | first = Jeff
title = Frequently Asked Questions About The End
publisher =
url = http://www.1079.com/faq.htm
date = 2006-11-29
accessdate = 2006-11-29
archiveurl =
archivedate = ] referring to its position on a radio dial. It also was the final song ever played, looping on repeat for the station's final twenty-four hours on May 12, 1999. Other stations have done similar continuous plays, such as 93X of Minneapolis in the mid 90's.
* The debate community has long rumored that the song is a reference to . This flows from the rapid-fire delivery (similar to "spread" speech in a policy round), the myriad ways the end of the world will occur (policy debates often devolve into competing claims that the opponent's advocacy will cause the end of the world), and other staples of debate rounds (e.g., "A tournament, a tournament, a tournament of lies. Offer me solutions, offer me alternatives and I decline."). This was to some extent confirmed in an interview for the BBC documentary "The Seven Ages of Rock" released on their website where Mike Stipe says: "The End of the World as we Know it...these were songs that were really addressing incredible social concerns of the time." [ [http://www.bbc.co.uk/music/sevenages/programmes/left-of-the-dial/ BBC - Seven Ages of Rock - Programmes - Left of the Dial ] ] .
* The song is heard at the beginning of the film "Independence Day" just before the alien signal is received. Similarly, it was heard in the film "Chicken Little", during the apparent alien invasion. It also appeared in a scene in "", in which the main characters start singing along but quickly prove unable to follow the lyrics; a similar scene is performed by in "" (Leonid whats-his-name/Herman Munster Motorcade/Birthday party//Pogo sticks and lemonade/You symbiotic stupid jerk/That's right, Flanders/I am talking about you!"), a 2001 episode of "" in which R.E.M. guest-star as themselves. The song was also played on after the won the in 2004.
* The song was included on the . Ironically, Clear Channel parodied the song in a promotion called, "It’s a XM World As We Know It (On 165)", promoting one of their talk radio channels on .
* In the 2001 video game there is a reference of the song. During the game, New York City is suffering what the game refers to as "the worst winter storm in history" and at one point in the game, two homeless junkies are standing around a barrel fire and one remarks to the other one "It's the end of the world as we know it and I don't feel fine... I don't feel anything"
* The song is also parodied at the beginning of 's "Last Laugh 2006" special, where the opening lyrics of the song are changed to random major figures and events from the year of 2006.
* In "", as the world is being taken over by Triceratons, one of the turtles says "It's the end of the world as we know it, and I sure don't feel fine."
* "" also had pair of episodes in their second season, one called "It's the End of the World" and the other called "(As We Know It)."
* The song is also on the soundtrack of the 1990 film "Flashback".
* The song was referenced in the comic strip Pearls Before Swine, on , . The strip starts with Pig and Rat (both wearing beer bongs) rocking out to the song and shouting out "Leonard Bernstein" in the end. A visibly exhausted Rat proclaims it as the greatest song in the world and Pig quips that they know only two words (those being "Leonard Bernstein").
* This song was voted #69 on 's 100 Greatest Songs of the 80's.
* The song was also used in the television series during the episode where attempts to sing the song and drive the family car with the left side of his body paralyzed.
*This song was the ending song for the review of and the opening song for the review of Tabula Rasa.