The History of the True Cross

The History of the True Cross 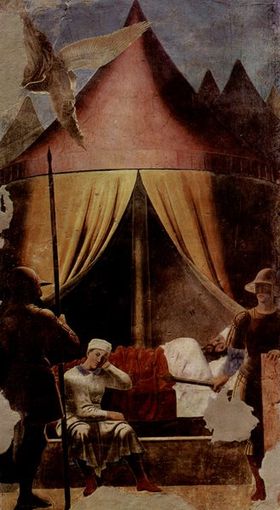 The Dream of Constantine, the first nocturnal scene in Western art (pre-restoration image). 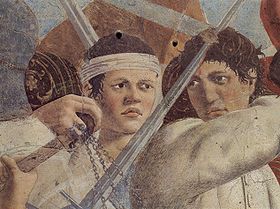 Detail of Battle between Heraclius and Khosrau.

The History of the True Cross or The Legend of the True Cross is a sequence of frescoes painted by Piero della Francesca in the Basilica of San Francesco in Arezzo. It is his largest work, and generally considered one of his finest, and an early Renaissance masterpiece.

Its theme, derived from the popular 13th century book on the lives of saints by Jacopo da Voragine, the Golden Legend, is the triumph of the True Cross – the wood from the Garden of Eden that became the Cross on which Christ was crucified. This work demonstrates Piero’s advanced knowledge of perspective and colour, his geometric orderliness and skill in pictorial construction.

The main episodes depicted are:

Piero diverged from his source material in a few important respects, including the story of King Solomon's meeting with the Queen of Sheba in a chronologically inaccurate place and giving greater emphasis to the two battles in which Christianity triumphs over paganism.

The cycle ends with a depiction of the Annunciation, not strictly part of the Legend of the True Cross but probably included by Piero for its universal meaning.

Dating of the frescoes is uncertain, but they are believed to date from after 1447, when the Bacci family, commissioners of the frescoes, are recorded as having paid an unknown painter. It would have been finished around 1466. Most of the choir was painted in the early- to mid-1450s. Although the design of the frescoes is evidently Piero's, he seems to have delegated parts of the painting to assistants, as was usual. The hand of Giovanni da Piamonte, in particular, can be recognised in some of the frescoes.