The Cross of Cong is an early 12th century Irish Christian ornamented cusped processional cross, which was, as an inscription says, made for Tairrdelbach Ua Conchobair (d. 1156), King of Connacht and High King of Ireland to donate to the Cathedral church of the period that was located at Tuam, County Galway, Ireland. The cross was subsequently moved to Cong Abbey at Cong, County Mayo, from which it takes its name. It was designed to be placed on top of a staff and is also a reliquary, designed to hold a piece of the purported True Cross. This gave it additional importance as an object of reverence and was undoubtedly the reason for the object's elaborate beauty.

The Cross will be on display in the National Museum of Ireland - Country Life, Turlough Park, Castlebar, from Wednesday, 31 March 2010 for one year.[2] This is the first time the Cross has been out of Dublin since the 1830s.[3] Usually, the Cross is displayed at the National Museum of Ireland, Dublin, having previously been in the Museum of the Royal Irish Academy, Dublin. It is considered one of finest examples of metalwork and decorative art of its period in Western Europe.

detail of the Cross of Cong

The cross consists of an oak cross, covered in gold, silver, niello, copper, bronze, brass, enamel, coloured glass, and other ornamentation.[4] In addition to traditional Irish design features from Insular art, the cross also displays some Viking and Romanesque influences,[1] including 'strapwork' decoration in the Urnes style. It has been suggested that the older Insular stylistic elements may be deliberate revivalism. The decoration includes minute golden filigree work in an intertwined pattern called on front and back. From the base heads of beasts on each side grip the cross in their mouth, a feature also found in German crosses. The overall shape of the cross was thought to be Romanesque, but recent discoveries have shown very similar shapes in much earlier Irish pieces.[5] Some of the original precious stones and glass pieces that studded the cross are now missing.

There is a large polished piece of rock crystal in the centre of the cross. Under this was placed the relic (sent from Rome around the year A.D. 1123) of what at the time was believed to be the True Cross. The relic is since lost, and was a small fragment of wood only. The crystal is semi-transparent, once enabling the relic to be partially seen by the viewer.

As a processional cross, the cross was carried mounted on its staff at the head of a religious procession by one of the officiating clergy or altar-servers. Often such crosses were then removed from their staff and placed on the altar during the ceremony.

According to Irish annals, supported by the inscriptions on the cross itself (which reference known historical personages), the cross was made in County Roscommon. In the annals, the cross is sometimes called in the Irish language "an Bacall Buidhe", which translates as "the yellow staff" — a reference to its golden colour. 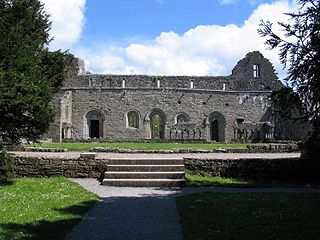 The cross was commissioned by King Tairrdelbach Ua Conchobair.

In A.D. 1123, according to the Irish annals, a small piece of the purported True Cross arrived in Ireland from Rome and was enshrined at Roscommon.[7] The cross then appears to have moved to Tuam. At an early date, probably in the mid-12th century, the cross was moved from Tuam to Cong Abbey, an abbey founded by the Augustinians on a much earlier Christian site.

In later centuries, the exact location of the cross in the Cong area is uncertain but it appears to be have been hidden by locals and ecclesiastics in their homes because of religious persecution against Catholics, which reached its peak in Ireland under the penal laws.

In 1680, Ruaidhrí Ó Flaithbheartaigh, the historian from County Galway, saw the cross (which he referred to as the "Abbot of Cong's Cross") and copied inscriptions from it. Edward Lhuyd of Wales,[8] Ó Flaithbheartaigh's friend, recorded this fact in his "Archaeologia Britannica", published in 1707.[9]

In the 19th century, George Petrie, the Irish antiquarian, was aware that Lhuyd's book mentioned the cross, though he partly misinterpreted the details. In 1822, Petrie had seen the cross himself when he passed through Cong on a tour he made of Connacht.[10] Petrie told his friend, Professor James MacCullagh (of Trinity College, Dublin), about the cross and of its historical value.[10] MacCullagh, using his own money, though not a rich man, afterwards purchased the cross from the Parish Priest of Cong — Fr. Michael Waldron.[11] Fr. Waldron had succeeded Fr. Patrick Prendergast as Parish Priest of Cong, when Fr. Prendergast died in 1829, and discovered the cross amongst his belongings. Fr. Patrick Prendergast, an Augustinian, was also considered to be the last Abbot of Cong Abbey. Fr. Prendergast had discovered the cross hidden in an old oak chest kept in a house in the village, where it was said to have been kept since about the mid-17th century (the time of the Cromwellian conquest of Ireland). Fr. Prendergast then kept the cross in his house, named 'Abbotstown', located on a farm in the townland of Ballymagibbon (or Ballymacgibbon), which is close to Cong.[12] William Wilde, who was from this part of Ireland, had seen the cross in his childhood in Fr. Prendergast's possession and stated that at that time (the early 19th century) the cross was used at Cong chapel at the festivals of Christmas and Easter, when it was placed on the altar during mass.[13] MacCullagh presented the cross in 1839 to the Royal Irish Academy, where it was for a long period one of its most treasured artefacts.[14][15]

The cross has inscriptions on it[4] — all of which are in the Irish language, with the exception of one which is in Latin.

The Latin inscription occurs twice — once on each side of the shaft — in one case the letters of the sixth word are "Pahus", and in the other, "Pasus"; it should be "Passus". A facsimile engraving (taken from a rubbing) of one of these inscriptions is shown below,

In modern Latin this is rendered as

which has been translated as

"With this cross is covered the cross on which suffered the Maker of the World."[4]

or, with similar meaning, as

"In this cross is preserved [or conserved] the cross on which the Founder of the world suffered."[16]

In addition, the translated Irish language inscriptions read as follows:

A prayer for Tairrdelbach Ua Conchobair, for the King of Ireland, for whom [that is, at whose desire or expense] this shrine was made.[17]

Pray for Domnall mac Flannacáin Ua Dubthaig, Bishop of Connacht and Comarb [Successor] of [Saints] Comman and Ciaran, under whose superintendence the shrine was made.[18]

Pray for Mael Isu mac Bratdan O Echan, who made this shrine.[6]