Make Your Own Damn Movie!

Make Your Own Damn Movie!

Make Your Own Damn Movie is both a book and a DVD set about Troma Entertainment and independent film in general.

Make Your Own Damn Movie!: Secrets of a Renegade Director is written by Lloyd Kaufman (with Adam Jahnke and Trent Haaga) published by St. Martin's, in 2003. Kaufman is the co-founder of B-movie company Troma Entertainment and the director of such films as The Toxic Avenger, Class of Nuke 'Em High, and Terror Firmer.

Kaufman and Haaga had previously collaborated on the 1999 film Terror Firmer and the 2001 film Citizen Toxie: The Toxic Avenger IV.

The A.V. Club called the book

The foreword to the book was written by South Park co-creator, Trey Parker. The introduction was penned by frequent Kaufman collaborator James Gunn. Gunn had previously co-written All I Need to Know about Filmmaking I Learned from the Toxic Avenger with Kaufman. 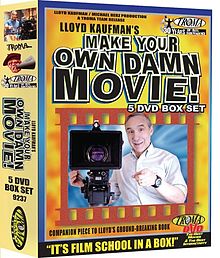 In 2005, Kaufman and Troma decided to expand the book into a 5 DVD set. The set, with more than 18 hours of material,[3] includes advice and interviews with Trey Parker and Matt Stone, George A. Romero, Stan Lee, John G. Avildsen, Eli Roth, James Gunn.[4]

The set also includes Kaufman's first major film The Battle of Love's Return.[5] in a deconstructed version. This was the only DVD version of the film until 2009, when the film was released as an Easter Egg on The Sexy Box, a DVD boxset of Squeeze Play!, Waitress!, Stuck on You! and The First Turn-On! [6].