Columbia River High School is a public high school in Vancouver, Washington, United States. It is part of the Vancouver School District (VSD). The school was opened to students in 1964. Columbia River has over 1,300 students.[2] Columbia River is a magnet school in the VSD for the International Baccalaureate Program.

In September 2006 the Vancouver School District announced the names of students who earned recognition as National Merit Scholarship Semifinalists. Of ten recipients, nine were students at Columbia River.[3] Two students were recognized as semifinalists in September 2007.[4]

In June 2010 Newsweek magazine listed Columbia River High School in its annual list of “America’s Best High Schools,” which includes 1,600, or about 6 percent, of the nation’s high schools. CRHS was listed 1,573rd nationally and 32nd out of 32 high schools listed in the state of Washington.[5]

Compared to the Vancouver School District high school populace as a whole, Columbia River students are more white, more likely to speak English at home and less likely to be eligible for subsidized lunches.[6]

Columbia River passed in all areas of Adequate Yearly Progress.[9]

According to the most recent School Improvement Plan for Columbia River, a large achievement gap exists in WASL results between races. For example, 90 percent of Asian students passed the math section of the 2003 WASL; this compared to a 46 and 21 percent pass rates for White and American Indian students respectively.[10] Results for Black and Hispanic students are not reported. 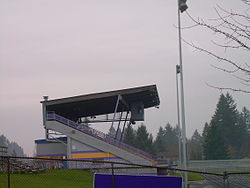 The Columbia River Chieftains teams play in the Greater St. Helens 3A League. In 2007, the football team won the 3A Greater Saint Helens League Championship. The 2007 3A GSHL Offensive and Defensive Players of the Year were both Columbia River football athletes.

They also won the State Championship (3A) in 1989. Columbia River was the runner up in the 1986 Washington State 3A championship and also in the 2004 and 2005 Washington State 3A championship. Currently the Chieftains have won back-to-back district titles in 2008 and 2009, placing top 16 in the state in 2009. In 2010, the Chiefs went 18-8 making it to the Final Four in the 3A State Tournament held at Safeco Field. They played league rival Camas High School in the state semifinals, losing 3-2 on a game winning double in the bottom of the 11th with 2 outs recorded.

In the 2009-2010 school year, the Chieftains won the girls 3A soccer state championship.

Columbia River in the News

Columbia River gained national media attention in December 2002 after a visit by Washington senator Patty Murray. In a question and answer session with the class of teacher Gary Lorentzen,[12] Sen. Murray stated: "We've got to ask, why is this man so popular around the world?" referring to Osama bin Laden, "Why are people so supportive of him in many countries that are riddled with poverty?" She elaborated that bin Laden had been "out in these countries for decades, building schools, building roads, building infrastructure, building day care facilities, building health care facilities, and the people are extremely grateful. We haven't done that." The remarks later became a political issue in her 2004 race against Republican challenger Rep. George Nethercutt.[13]

Solar panels were installed at Columbia River High School on May 26, 2010. The panels were purchased by a grant through the Clark Public Utilities Green Lights Program. Under peak sun conditions, the panels will produce 2,160 watts of power. Under typical Vancouver conditions, this relates to 2,400 kilowatt hours per year.[14]