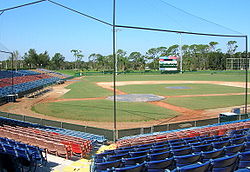 Holman Stadium is a baseball stadium in Vero Beach, Florida, built in 1953 to accommodate spring training for the Dodgers as part of a complex called Dodgertown. In addition to the Dodgers' spring games, it was also the home of the Vero Beach Devil Rays of the Florida State League, through the 2008 season. Official seating capacity is 6,500.

The Brooklyn Dodgers were one of the first major league baseball teams to conduct spring training in Florida, establishing their operations in this quiet beachside town in 1948. The team continued the tradition after becoming the Los Angeles Dodgers in 1958. In recent decades, Arizona has established itself alongside Florida as the second major center for spring baseball, and the Dodgers were the last western team to still conduct its spring training in Florida.

In 2001, the Dodgers seriously considered moving their spring training operations to Arizona, but the city of Vero Beach persuaded them to stay by purchasing the Dodgertown complex from the team and leasing it back for $1 per year. In 2006, the Dodgers again received offers from several Arizona cities, attempting to persuade them to move. The Dodgers will have to repay much of the money Vero Beach laid out to purchase the complex, but the Arizona offers were too lucrative to overcome this obstacle. With the Camelback Ranch opening in Glendale, Arizona in 2009, the Dodgers joined the Chicago White Sox to share operations of the new facility. The Dodgers' last spring training game in Vero Beach was on March 17, 2008.

In addition, the neighborhood around Dodger Stadium in Los Angeles is expected to be renamed Dodgertown, in keeping the spirit of the Dodgers' longtime spring-training home.

Holman is unique for its open-air dugouts that are literally dug out along the sides of the field. These may have been the inspiration for the dugouts in Johnny Hart's B.C. comic strip. "This place is so different from any other park," states George Betscha, a Batboy at Dodgertown from 2005-2008. "There is so much history here and you can feel it when you walk around."

In addition to baseball, the Holman Stadium complex and conference center have hosted training sessions by the New Orleans Saints, the Kansas City Chiefs, the Philadelphia Eagles, the Miami Hurricanes, the Chunichi Dragons of Japan, the Osaka Buffaloes (Japan) and the LG Twins from Korea. The Saints held training camp in Vero Beach during July and August ten of the eleven years between 1974 and 1984.[2]

The Baltimore Orioles were recruited to move up to Vero Beach in 2010, from their spring home in Fort Lauderdale, but after failing to reach an agreement, the City of Vero Beach rescinded its offer.

The city is exploring other options outside of Major League Baseball spring training. Reports surfaced in 2009 that the Major League Baseball Players Association was considering Holman Stadium as an alternate training site for players who entered the spring as unsigned free agents, such as Manny Ramirez. But the MLBPA decided not to go forward with the plan.

There is no word on whether nearby Dodgertown Elementary School will change its name.

The United Football League has expressed an interest in using the Dodgertown facility as a training and practice grounds.

Dodgertown became the Vero Beach Sports Village in 2010. It is now used for sports tournaments including baseball and football tournaments, concerts, monster truck rallies and other special events. 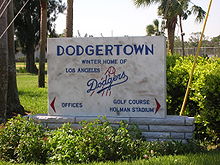