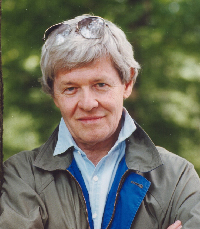 Johnny Hart ( &ndash; ) was an American noted as the creator of the "B.C." and co-creator of the strip "". Hart was recognized with several awards, including five from the , and the Swedish . In his later years, he sparked controversy by incorporating overtly Christian themes and messages into the strips.

Hart's first published work was shown in "Stars and Stripes" while he served in Korea as an enlisted member of the , and after returning in 1953 he published work in magazines such as "" and "". Hart's biggest success, "B.C.", was created in 1957 and began national daily s appearances on .

wikinews|Johnny Hart of "B.C." fame passes awayHart died of a stroke on . According to his wife, he was working at his drawing table at the time of his death.

Though Hart was raised in a casually religious family; he attended Christian Sunday School regularly. Although his formal education ended with high school, he was fascinated by the from a young age.

Two strips in particular were controversial. The "B.C." strip for April 15 2001, which was , portrayed a menorah with seven candles progressively burning out as the strip captions ran the words of . At the end, the outer arms of the candelabra broke away, leaving a , with the final panel portraying the opened and empty tomb of Christ.

Another "B.C." strip, which ran November 10 2003, showed an outhouse with a traditional , which a character entered with a vertical graphic "SLAM", only to ask, "Is it just me, or does it stink in here?" Critics including the claimed that the combination of the vertical bar and the "SLAM", as well as the crescent moons both in the sky and on the outhouse, made the strip a slur on . Hart denied that it was anything but an outhouse joke.

Hart was an active member of his local community - the area of in , which shares a common abbreviation of 'B.C.' Hart donated B.C.-based drawings and logos free of charge to many entities and organizations found in the Broome County area, including logos for:
* - Caveman on Wheel
* - Dinosaur
* - Caveman on Wheel with Food
* [http://www.unitedwaybroome.org/pages/member%20agencies/American_Red_Cross.htm Southern Tier Red Cross] - Caveman building Red Cross with Bricks
* - Irish Caveman with Kazoo
* PGA Tour Event (1971 - 2006) - Caveman golfing
* Hockey Club - Caveman with hockey stick
* Hockey Club - Brute Cavemen playing hockey
* - Caveman in stone wheelchair stuck in cave doorway, "Wiley" character navigating a landscape full of holes Hart's involvement with the B.C. Open dates back to the early 1970s, and characters from "B.C." are used extensively in advertising and marketing materials for the event, including the winner's trophy which is a bronzed version of a hapless "B.C." Caveman golfing, a light-hearted trophy when compared to many others, leading it to earn the designation of being "voted by the players on Tour as the best trophy on Tour; the one that they would love to have." [cite news
url=http://www.pressconnects.com/apps/pbcs.dll/article?AID=/20070409/NEWS01/704090324/1001/ARCHIVE
title=B.C. Loses Hart
author=George Basler
publisher=
date=
accessdate=2007-04-09]

Additionally, Hart contributed original panels of "B.C." strips for charity auctions with the -based PBS affiliate, . He also provided album cover art for the 1999 album "Still Fresh" by a capella group , and his strips for B.C. were the inspiration for the mascot of , the anteater. [cite news
url=http://www.admissions.uci.edu/mascot.html
title=UC Irvine, Peter the Anteater
publisher=
accessdate=2007-04-09]

Prior to his death, Hart had built up a significant computer archive of drawings for "B.C.", and family members have been assisting with drawing the strips for several years. New "B.C." strips with his daughters and grandsons have begun. [cite news
url=http://news.yahoo.com/s/ap/20070409/ap_en_ot/obit_hart_27
title=Johnny Hart, 'B.C.' creator, dies at 76
author=Mary Esch
publisher=
date=
accessdate=2007-04-09]