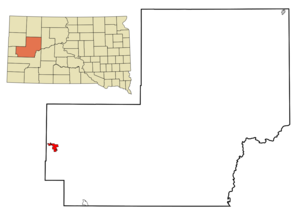 mapsize = 250px
map_caption = Location in Meade County and the state of

Sturgis is most famous for being the location of one of the largest annual motorcycle events in the world, which is held annually on the first full week of August. Motorcycle enthusiasts from around the world flock to this usually sleepy town during the .

There were 2,738 households out of which 30.2% had children under the age of 18 living with them, 48.0% were married couples living together, 11.5% had a female householder with no husband present, and 37.6% were non-families. 33.3% of all households were made up of individuals and 15.6% had someone living alone who was 65 years of age or older. The average household size was 2.29 and the average family size was 2.91.

As part of the vast complex, the land north of Sturgis was dotted with 50 Minuteman s, with the closest (L5) only 3.5 miles from the center of the town.