Chironex fleckeri, commonly known as sea wasp, is a species of Box jellyfish found in coastal waters from northern Australia and New Guinea north to the Philippines and Vietnam.[1] It has been described as "the most lethal jellyfish in the world", with at least 63 known deaths from 1884 to 1996.[2]

Notorious for its sting, C. fleckeri has tentacles up to 3 metres (9.8 ft) long which are covered in thousands upon thousands of cnidocytes which, on contact, release microscopic darts, each delivering an extremely powerful venom. Being stung commonly results in excruciating pain, and if the sting area is significant, an untreated victim may die in as little as 3 minutes.[3] The amount of venom in one animal is said to be enough to kill 60 adult humans, about 70 children, or 87 babies.[3]

First aid consists of washing the sting area with vinegar, and in no circumstance should alcohol, alcohol-based lotions, or methylated spirits be applied. Cardiopulmonary resuscitation (CPR) may be required. Medical help should be sought as soon as possible after considering these needs.

Chironex fleckeri is the largest of the cubozoans (commonly called box jellyfish), many of which may carry similarly toxic venom. Its bell grows to about the size of a basketball, and trails four clusters of 15 tentacles trailing from each of the four corners of the bell. The pale blue bell has faint markings and viewed from certain angles it bears a somewhat eerie resemblance to a human head or skull. Since it is virtually transparent, the creature is nearly impossible to see in its habitat, posing particular danger to swimmers.

When the jellyfish are swimming the tentacles contract so they are about 15 cm long and about 5 mm in diameter; when they are hunting, the tentacles are thinner and extend to about three meters long. The tentacles are covered with a high concentration of stinging cells called cnidocytes which are activated by pressure and a chemical trigger; they react to proteinous chemicals. Box jellyfish are day hunters; at night they are seen resting on the ocean floor, apparently 'sleeping'. However, this 'sleeping' theory is still debated.[citation needed]

In common with other box jellyfish, Chironex fleckeri have four eye-clusters with twenty-four eyes. Some of these eyes seem capable of forming images, however it is debated whether they exhibit any object recognition or object tracking; it is also unknown how they process information from their sense of touch and eye-like light-detecting structures due to their lack of a central nervous system. During a series of tests by leading marine biologists including Australian jellyfish expert Jamie Seymour, a single jellyfish was put in a tank. Then, two white poles were lowered into the tank. The creature appeared unable to see them and swam straight into them, thus knocking them over. Then, similar black poles were placed into the tank. This time, the jellyfish seemed aware of them, and swam around them in a figure-of-eight. Finally, to see if the specimen could see colour, a single red pole was stood in the tank. When the jellyfish apparently became aware of the object in its tank, it was seemingly repelled by it and remained at the far edge of the tank. Fascinated by this, the experts believed to have found a repellent for the creature and put forward the idea of red safety-nets for beaches (these nets are usually used to keep the jellyfish away, but many still get through its mesh). The test was repeated, with similar results, on Irukandji jellyfish, another toxic species of box jelly.

Chironex fleckeri live on a diet of prawns and small fish and are prey to turtles, whose thick skin is impenetrable to the cnidocytes of the jellyfish.

The medusa is pelagic and has been documented from coastal waters of Australia and New Guinea north to the Philippines and Vietnam.[1] In Australia it is known from the northern coasts from Exmouth to Agnes Water, but its full distribution outside Australia has not been properly identified.[1] To further confuse, the closely related and also dangerously venomous Chironex yamaguchii was first described from Japan in 2009.[4] This species has also been documented from the Philippines,[4] meaning that non-Australian records of C. fleckeri need to be re-checked.Some Chironex fleckeri are also spotted in the Gulf of Mexico very close to Texas but, rarely ever encountered . 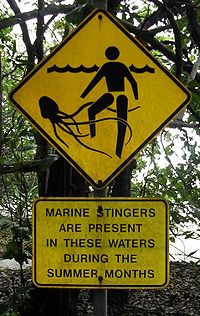 Chironex fleckeri is best known for its extremely powerful and occasionally fatal sting. The sting produces excruciating pain accompanied by an intense burning sensation, and the venom has multiple effects, attacking the nervous system, heart, and skin at the same time. While an appreciable amount of venom (contact from about ten feet or three metres of tentacle) needs to be delivered in order to have a fatal effect on an adult human, the potently neurotoxic venom is extremely quick to act. Fatalities have been observed as little as four minutes after envenomation, notably quicker than any snake, insect or spider.  Occasionally a person swimming who gets stung will undergo cardiac arrest or drown before they can even get back to the shore or boat.

If a person does manage to get to safety, treatment must be administered urgently. Dousing a sting with vinegar immediately inhibits any nematocysts which have not been activated,[5] whereas rubbing a sting or dousing with alcohol can encourage nematocysts to activate. After dousing with vinegar, rescue breaths and CPR may be required; for less serious stings, treatment with ice packs and antihistamines is an effective method of pain relief.[6] Adhering tentacles should be removed carefully from the skin using protected hands or tweezers. Removed tentacles remain capable of stinging until broken down by time and even dried and presumably dead tentacles can be reactivated if wetted. The Australian snake bite treatment using roller bandages to bandage the affected limb (with the aim of preventing distribution of the venom through the lymph and blood circulatory systems) was no longer recommended for box jellyfish envenomation after 2005. The change was prompted by research which showed that using bandages to achieve tissue compression provoked nematocyst discharge, despite the use of vinegar.

An antivenom to the Box Jellyfish's sting does exist. After the immediate treatment described above, it must be administered quickly. Hospitals and ambulance services near to where the jellyfish live possess it, and must be contacted as soon as possible. The jellyfish's venom is so powerful, however, that even if the victim does get to safety and have the immediate treatment given and contact the ambulance, they may die before the ambulance reaches them.

In Australia, C. fleckeri has caused at least 64 deaths since the first report in 1883,[7] but most encounters appear to only result in a mild envenomation.[8] Most recent deaths have been children, as their smaller body mass puts them at a higher risk of fatal envenomation.[7]

Chironex fleckeri and other jellyfish, including the Irukandji (Carukia barnesi), are abundant in the waters of northern Australia during the summer months (November to April or May). It is believed they drift into the aforementioned estuaries to breed. Signs like the one pictured are erected along the coast of North Queensland warning people of such, and few people swim during this period. Some people still do, however, putting themselves at great risk. At popular swimming spots, net enclosures are placed out in the water wherein people can swim but jellyfish cannot get in, keeping swimmers safe. The much smaller (but generally non-lethal) Irukandji, however, can pass through the nets and no known antivenom for its sting has been developed yet.