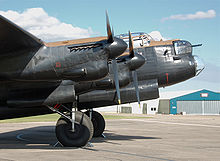 A nose gunner or front gunner is a crewman on a military aircraft who operates a machine gun turret in the front, or "nose", of the airplane. This position was usually manned by someone who only operated the gun, however, the nose gunner could have a dual role (navigation, bombardier, etc.). Also, stationary guns could be mounted in the nose and controlled by the pilot or co-pilot. Manned nose guns were most common during World War II, employed by both Allied and Axis forces.

During World War II, many aircraft were equipped with guns for protection against other aircraft. One of those guns was often fitted in a nose turret of the aircraft.