A door gunner is a crewman tasked with firing and maintaining manually directed armament aboard a helicopter. The actual role will vary depending on the task given on a particular mission. 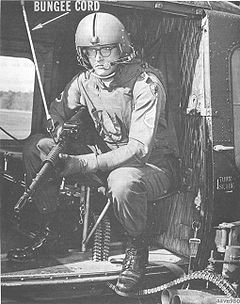 A U.S. Army Vietnam-era Door Gunner (circa 1966) is shown manning his duty position on a UH-1B/C helicopter gunship, with a 'bungee cord' securing his M-60 Machine Gun to the aircraft cabin doorway.

The role of "Door Gunner" originated during the Vietnam War, when helicopters were first used in combat in large numbers. The original personnel who served as early Door Gunners aboard CH-21, UH-34, and UH-1 helicopters in Vietnam, were enlisted men, with a designated and specially trainined 'Crew Chief' serving as both the aircraft's maintenance manager and a Door Gunner. And normally, a second enlisted Soldier served as a second Door Gunner (such as on a UH-1, and UH-34, which both used two gunners (one on each side of the aircraft)). Later, as the War progressed, the Door Gunner position sometimes used a non-aviation rated/trained Soldier or Marine, that volunteered for Door Gunner duties.

For the majority of the Vietnam War, the principal weapon of the Door Gunner in Vietnam was a Medium Machine Gun (MG), initially, a M-1919A4 .30 Caliber MG, and soon thereafter, the M-60 7.62mm MG became the standard helicopter door armament system. However, when a helicopter was not armed or outfitted with a dedicated MG for door armament, the Door Gunner was forced to use a rifle, or a carbine, as a defensive weapon. (Thus, some Door Gunners in Vietnam are sometimes seen using an M1 Carbine, an M14 rifle, or an M16 rifle, as their only weapon.) (In the very first U.S. Army helicopter units (flying CH-21 helicopters) that began flying combat missions in Vietnam in 1962, some helicopters were not armed with a door MG, and the Door Gunners thus carried an M1 Carbine, or an M14 rifle, as the sole door weapon.)

Initially, the Door Gunner's MG weapons were mounted on swiveling mounts (on a pintle mount) in order to retain and steady the door armament weapon, which was usually an M60 machine gun. As the War progressed, using bungee cords to suspend/retain the MG weapons became a common practice for Door Gunners, as the newfound maneuverability of these 'bungeed' MG weapons allowed for increased angles to shoot from. Further, some Door Gunners simply did not use any retention device with their MG weapons (such as a pintle mount, or a bungee cord), and instead, they simply hand-held the weapon for a maximum level of maneuverability of fire. This practice was commonly termed as using a "Free 60", referring to the directional freedom of an unrestrained M-60 MG.

Door Gunners were normally restrained for safety within the aircraft, by either using a standard seat lap belt, or if the Gunner wanted freedom of movement within the aircraft while still being retained, he used a "Monkey Harness", which was a GI safety harness worn on the torso, and anchored to the aircraft floor, or cabin wall. The "Monkey Harness" allowed a Door Gunner great movement, while preventing them from from falling out of the helicopter completely, i.e. if they leaned outward on the helicopter skids, to get a better firing angle.

The Door Gunner position was not a particularly popular one, due to the inherent vulnerability of manning a machine gun in the open door of a helicopter. Today, helicopters like the UH-60 have two machine guns firing out of two windows located behind the pilots. The CH-46, CH-47 and CH-53 have an additional gun that is fired from the rear ramp. The UH-1 (still in use by the U.S. Marine Corps) is still manned as it was in the Vietnam War, actually firing from an open cabin door.

U.S. Navy door gunners now provide stand off security against attack by small craft. U.S. Army crew chiefs in UH-60 and CH-47 units serve as gunners in addition to their maintenance duties. Today, the term "door gunner" usually applies to those personnel that aren't qualified crew chiefs and thus don't fly operationally (the exception would be maintenance personnel that are on flight status for test flight purposes in the aviation maintenance company within aviation battalions; in this case these personnel don't fly often).

The modern door gunners are normally drawn from support soldiers within the aviation battalion, detailed from his or her company to one of the flight companies within the battalion. Upon notification of an upcoming deployment to a hostile fire zone, an aviation unit is allowed to select and train personnel assigned to the unit for the duration of the deployment (flight status is terminated upon completion of the deployment). They normally undergo a specified training period (normally referred to as a "progression") and then assume part time or, in some cases dependent on the needs of the companies and the battalion as a whole, full time flying duties. Duties range from preparation of the machine guns (typically M240 model weapons), performing inflight observer duties, and assisting the crew chief with maintaining the aircraft.

After completing a certain number of combat missions Army door gunners are eligible for the award of the Army Aviation Badge.

Most door gunners use some sort of machine gun such as the M60, M240, M2HB, or more recently, the General Electric M134 minigun