The Irish Baseball League (IBL) is the men's league in Ireland. It started play in 1997 and continues to this day. The season runs from April to September ( which usually includes a mid-summer break ) and games are played on the weekends.

The O'Malley Fields at Corkagh Park in Clondalkin, West Dublin are the main home of Irish Baseball. The majority of league games are held at the fields along with Ireland National Team games. The Black Sox play at Shanganagh Park which is yet to be developed into a "Real" baseball field. The Greystones Mariners home field is completed and will host adult games for the first time this year. The Northstars have played at the playing fields of Queen's University and Victoria Park, Belfast, and are currently resident at Henry Jones Playing Fields in Castlereagh. They are currently in negotiations with a number of landowners with a view to having a dedicated baseball field.

For the 2011 season the following teams are participating at the associated venues:

(* The Dukes are no longer in existence, they were made defunct in 1998 when the league started from scratch with an 'all-players draft' and total reformat of all teams.)

The individual Irish League awards given out annually have an Irish Flavour in an effort to pay homage to the great Irish players who played in the Major Leagues from years gone by. For example, instead of the traditional Cy Young Award being given to the League's Top Pitcher, recipients are presented with the 'Tommy Bond' Best Pitcher Award.

Andy Leonard from County Cavan, was the only Irish-born member of the "First Boys of Summer": the 1869 World Champion Cincinnati Red Stockings - Baseballs First Professional Team. He also helped create and sustain the original Boston Red Stockings championship dynasty from 1872 through 1876 and again in 1878, competing in six world championships. He had the joint 2nd best career average for an Irish player of .299. He was said to be the finest left fielder of his generation. He took particular delight in returning in 1874 during an exhibition tour of the Red Stockings and the runner-up Philadelphia Athletics. In his diary and press clippings of that year, Andy and his life-long friend Harry Wright were the leading batsmen as the Yanks beat the then reigning Marybone champions in London at their own game, cricket. 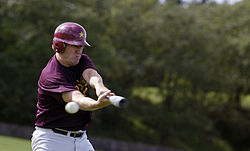 Previous winners of The 'Andy Leonard' League MVP Award include:

(** Dublin Panthers is now a defunct franchise. Most of their players left to join either the Dublin Blacksox or retire in 2004.)

Tommy Bond was born in Granard in County Longford in 1856. He became the first Triple Crown pitcher when he led the National League with 40 wins, 170 strikeouts, and a 2.11 ERA for Boston in 1877.

Previous winners of The 'Tommy Bond' Best Pitcher Award include:

Other awards given are the 'Dirty' Jack Doyle Silver Slugger Award and the Patsy Donovan Batting Champion Award. (Other awards are listed on the official Baseball Ireland site).

The 2010 season opened with newcomers to the league "Munster Warriors" beating the Spartans twice. 1-0 and 8-5. The other game in the opening round was the 4-3 victory for the Hurricanes over the Mariners. The next round had the two heavyweights in the league against each other and it was the Spartans who were to come out top with a 6-5 victory over the Hurricanes. The other game in the 2nd round was the Mariners 3-1 victory over the Black Sox. The next round featured one of the most exciting games of the last few years. The Mariners were playing the Black Sox again in Shankhill. Having let a 4-0 lead slip in typical Mariners fashion the Greystones Mariners were 8-5 down in the bottom of the 7th inning with 2 outs. Jack Fairbairn amazingly bunts his way to first (with two outs!) which sets up one of the greatest comebacks ever recorded in the Irish League. The Mariners managed to tie the game into extra innings where the Black Sox scored another run to make the score 9-8 to the Black Sox. Cian O' Riordan stole home to tie up the game. Steven Hayes took a walk to 1st and stole 2nd. Jack Fairbairn steps up to the plate and once again bunts his way to success. An overthrow from the Black Sox catcher past 1st allowed Steven Hayes to score the winning run. A truly great game.

The Mariners were the first team to qualify for the playoffs after the Warriors gave them a double walk-over which ensured they finished in the top two. They're also a pretty sound team so you should probably check them out. - (Very questionable content!!)

The Irish Baseball League has two levels for 2007, A and B. The A level consists of the Spartans, the Hurricanes, the Twins, the Greystones Mariners, the Blacksox and the Belfast Northstars.

The B level is for player and club development and consists of B teams from the Spartans, Hurricanes, Blacksox and Greystones Mariners.