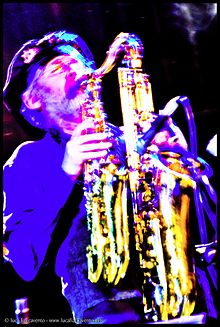 David Nicholas George Jackson (born 15 April 1947, Stamford, Lincolnshire), nicknamed Jaxon, is a British progressive rock saxophonist, flautist, and composer. He is best known for his work with the band Van der Graaf Generator and his work in Music and Disability.[1][2] He has worked with artists including Peter Gabriel, Keith Tippett and Howard Moody.

Jackson was a member for most of the 1970s and for their 2005 reunion tour. His specialty was then electric saxophones, using octave devices, wah-wah and powerful amplification.

His saxophone-playing is characterized by the frequent use of double horns, playing two saxophones at the same time, a style he copied from Rahsaan Roland Kirk (whose style and technique influenced Jackson).[3] He also plays flutes and whistles. In the NME reviewer Jonathan Barnett called David Jackson "the Van Gogh of the saxophone - a renegade impressionist, dispensing distorted visions of the world outside from his private asylum window".[4] 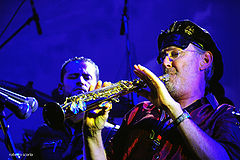 Jackson attended the University of St Andrews, reading psychology,[5] and University of Surrey, Roehampton, studying teaching. He has worked as a mathematics teacher for primary children in the UK.[6]

He has also worked with physically and mentally disabled people, enabling them to make music through the use of a technology known as Soundbeam.[7][8] He is also a Soundbeam trainer, system designer and builder.[9]

Tonewall is the name for his idea. Apart from Soundbeams this also features Echo-Mirrors and Jellybean Eye. Jackson works together with groups of people of all levels of ability and even profound disability to create music together on stage, accompanied by musicians from diverse styles, such as orchestral and jazz musicians, Caribbean music, and much more.[9]

His daughter is singer Dorie Jackson, who works with Chris Difford, Francis Dunnery and William Topley among others. His son is recording engineer Jake Jackson.[10]

With The Long Hello