The history of the company began at the early 1990s. After the success of Malaysian automotive manufacturer Proton, the government looked forward to launch a national motorcycle project. Modenas was formed in 1995 and majority of its shares were held by Kawasaki, Sojitz, Khazanah Nasional and DRB-HICOM.

Modenas achieved its 1,000,000th unit production in June 2007. Currently Modenas is exporting its products to 13 countries worldwide with Greece being the largest importer. 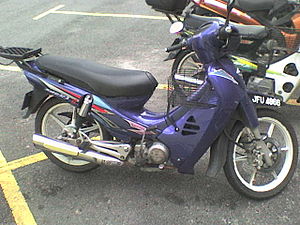 Modenas Kriss is the first model launched by Modenas in 1996. The model is actually named after a Malay traditional weapon, kris, though some motorcycle shops in the United Kingdom had mistakenly advertised the model to be named from the acronym of a famous American motorcycle racer, Kenny Roberts because Modenas had once built some racing motorcycles for Modenas KR Motorcycle Grand Prix team.

It was previewed to the public during Malaysian National Day parade in 1996 and began production at the end of 1996. The original model only uses drum brakes, but in 1999 the front disc brake model was launched, known as Kriss 2 (or Kriss 115 Sports in some countries). Powered by 111 cc Kawasaki-developed engines, Modenas Kriss becomes the best-selling motorcycle model in Malaysia.

In 2005, all Kriss 110 variants have been phased out to make way for production of Kristar, leaving only Kriss 100 as the sole variant of Kriss. However, Modenas decided to bring back the Kriss 110 into production in August 2006 due to extremely high demand from the customers, which is known as Kriss 110SE.

This is the Modenas Newest Kriss Motorcycle. Since Kriss is the most good selling motorcycle in Malaysia (rather than Kristar), Modenas decided to bring Kriss back and called them Kriss 110 SE (Second Edition).

After the success of Kriss variants to dominate 110 cc small motorcycle segment in Malaysian market, Modenas launched another Kriss variant, this time with a 97 cc engine developed by Modenas. This model uses the same chassis and components as its other Kriss 'brothers' except the engine. However, there is no disc brake option available for Kriss 100. 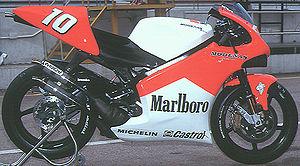 The Modenas KR3 was the first racing motorcycle ever produced by Modenas. It featured a 500 cc V3 engine which was different from most 500 cc Motorcycle GP which used 4-cylinder engines. The KR3 was built by Modenas for Modenas KR Motorcycle Grand Prix team from 1997 to 2001 before taken over by Proton from 2002 to 2004 with the same machine before the team moved to Proton KR V5 machines.

In year 1999, Modenas launched a small cruiser model based on popular Kawasaki Eliminator 125 cruiser series. This model is aimed for bikers who wish to own large American cruiser motorcycle but cannot afford to own them, due to very high duty on imported motorcycles placed by the government and also refusal of the banks to finance loans on large motorcycles.

During these recent years, more and more scooter models were introduced in Malaysia. However, Kawasaki never produced any scooters, therefore Modenas had to source from a Taiwanese scooter company for the technology transfer.

The earliest production batches suffered poor handling, and after some improvements the handling of this model became better and Modenas Karisma dominates the Malaysian scooter market since 2004.

On August 2003, Modenas introduced three scooters, based on models produced by PGO Scooters of Taiwan. Mostly as the great competitor of scooter producer such as Suzuki VS, Yamaha and Honda.

Modenas Ceria scooter was launched together with the Elit model. Also based on a PGO (the BuBu 100), this more retro-styled scooter uses a smaller 101 cc engine, making Ceria the scooter with the smallest displacement ever produced by Modenas.

After years producing only 4-stroke powered motorcycles, Modenas launched its first 2-stroke motorcycle, Dinamik together with Elit and Ceria scooters. It is also claimed by Modenas that this model exceeded Euro 2 emission standards without the addition of a catalytic converter.

This model was built by Modenas as a preparation to take part in Malaysian Cub Prix tournament which are currently dominated by Yamaha machines. During the tournament, Modenas increases the displacement up to 125 cc to provide more power and torque.

At the end of February 2004, Modenas launched their first water-cooled scooter, Modenas Elegan. This model is targeted for those who wants to travel long distances. In addition to more powerful water-cooled engine, Elegan scooter features a large gasoline tank accessible under the handlebars, large underseat storage compartment, and digital meter panel for odometer, fuel gauge and thermometer. The engine cylinder is coated with Ni-Si ceramic for better reliability during long distance travels.

Kristar was launched by Modenas at the end of 2004. Modenas decided to produce Kristar as their all-new model after nearly a decade of Modenas Kriss production.

Besides of the new design and better fuel economy, Kristar also features an underseat compartment that can be opened from the same ignition key slot, dual headlights, stylish superbike-like muffler and rear light failure detection system which claimed by Modenas as the only model equipped with this system. [[Image:[1]]]

Modenas Passion is the latest scooter model launched by Modenas on January 2006. Using a pair of 14-inch cast iron wheels, Modenas Passion has a direct competition with Yamaha Ego. 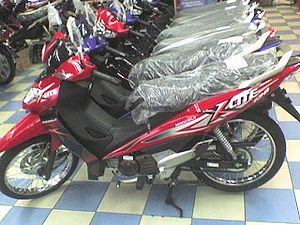 Modenas X-cite is the latest motorcycle model launced by Modenas on 12 September 2006 as the largest Cub仔 model ever manufactured by Modenas to compete with the water-cooled Yamaha Y135LC.

The main features of the Modenas X-cite are as follows:-

Malaysian's hero, Adnan Sempit's motorcycle. The newer Modenas that was launch on March 2009. It introduced the revolusioner chasis and the redesigned Xcite 130 engine. This Modenas has become one of the Malaysian most best seller Moped in 2009. GT 128 also has the most highest spec in its class, nearest the 135 LC. Now GT128 is the flagship model of Modenas market.

The redowngraded of Modenas GT128 with the 110 cc engine. It uses the revolusioner GT128 chasis while the main power is came from 110 cc kriss 1 redesign engine. The Modenas CT is the replacement of Modenas Kriss 1 and 2.

Currently, Modenas has develop an E-Bike, known as CTric that use 100% of electricity to move it. With its zero emission when used, it was predicted to launch before the end of 2010.

A fully electric bike using the same chassis as CT110/100. It was launched on 17th June 2011 and also the first time MODENAS entering the electric vehicle segment.

This model is believe to be the first electric bike model using the underbone chassis which is most of the small electric bike is based on the scooter models.

Modenas formed a factory team and supported some other teams using their machines to take part in Malaysian Cub Prix, a tournament of moped held in Malaysia to compete with Yamaha and Suzuki machines. The teams use Modenas Kriss machines for Wira category and Modenas Dinamik for Expert category.

Modenas also used to take part in Motorcycle Grand Prix via Team Modenas KR before taken over by Proton in 2001. Kenny Robert and Bud Aksland built the 500 cc V3-cylinder 2-stroke machine for the team.