Jean-Pierre Changeux (born 6 April 1936) is a French neuroscientist known for his research in several fields of biology, from the structure and function of proteins (with a focus on the allosteric proteins), to the early development of the nervous system up to cognitive functions. Although being famous in biological sciences for the MWC model, the identification and purification of the nicotinic acetylcholine receptor and the theory of epigenesis by synapse selection are also notable scientific achievements. Changeux is known by the non-scientific public for his ideas regarding the connection between mind and physical brain. As put forth in his book, Conversations on Mind, Matter and Mathematics, Changeux strongly supports the view that the nervous system is active rather than reactive and that interaction with the environment, rather than being instructive, results in the selection of preexisting internal representations.

Changeux was born in Domont, France. He entered the École Normale Supérieure in 1955, where he obtained a Bachelor's degree (Licence) in 1957 and a Master's degree (Diplome d'Études Supérieure) in 1958. He also received his agrégation in natural science the same year. He began his scientific career during his ENS years during summer internships in Banyuls-sur-Mer where he identified a new genus of parasitic Copepod. He pursued PhD studies at the Pasteur Institute under the direction of Jacques Monod and Francois Jacob, and gained his doctorate in 1964. Changeux then left France for postdoctoral studies first at the University of California Berkeley (1965–1966) then at Columbia University College of Physicians and Surgeons, New-York (1967). He returned to France as attaché to the chair of Molecular Biology held by Jacques Monod. In 1972, he became director of the Unit of Molecular Neurobiology at the Pasteur Institute, where he received a professorship in 1975. In 1975, Changeux was elected professor at the Collège de France, chair of Cell Communications, position that he held until 2006. Changeux is author of more than 600 scientific articles and several books, technical or for general audience.

All his scientific career, Changeux has been faithful to a handful of scientific questions, at molecular, cellular and brain levels. If one needs to seek a unifying theme to all of them, it is the conviction that selection is the basis of life processes, rather than instruction. While started as separate lines of investigations, all the research threads were tied in the recent decades within the study of allosteric mechanisms as a basis of for the involvement of nicotinic receptors in cognitive functions.

Diagram representing an allosteric transition of a protein between R and T states, stabilised by an Agonist, and Inhibitor and a Substrate. Adapted from Changeux and Edelstein (2004) Nicotinic Acetylcholine Receptors: From Molecular Biology to Cognition.

During his PhD training, under the direction of Jacques Monod and Francois Jacob, Changeux studied the allosteric regulations of enzymes, that is the modulation of their activity by compounds different from their substrates.[1][2][3] This work led to the development of the model of concerted transitions for allosteric proteins.[4][5] The main ideas behind this theory are: 1) proteins can exist under various conformations in thermal equilibrium in the absence of regulators. The allosteric regulators merely shift the equilibrium between the conformations, stabilizing the ones for which they display the highest affinity, and 2) all the subunits of a symmetrical multimeric protein exist in the same conformation, the transition taking place in a concerted fashion. The resulting model explain the observed cooperativity without a progressive change of biophysical parameters. This conceptual framework is still the principal model used to explain the function of cooperative proteins such as hemoglobin.

In his PhD thesis, Changeux suggested that the recognition and transmission of signals by membrane, and in particular by synapses, could use the same mechanisms than the allosteric regulations of enzymes. More than forty years of research would follow, mainly focussed on nicotinic acetylcholine receptors (see below). In 1967, Changeux extended the MWC model to bi-dimensional lattice of receptors[6] (an idea that would also be developed three decades afterward by Dennis Bray[7]). He then applied this idea to the post-synaptic membrane of electric organs (analog to striated muscle).[8][9] His team demonstrated the existence of several interconvertible states for the nicotinic receptor, resting, open and desensitized, displaying different affinities for the ligands, such as the endogenous agonist acetylcholine.[10][11][12] The transitions between the states followed different kinetics, and those kinetics plus the differential affinities sufficed to explained the shape of the post-synaptic potential. A full mechanistic model of the nicotinic receptor from striated muscle (or electric organ) was to be provided much later, when Changeux collaborated with Stuart Edelstein, another specialist of allostery, who worked during decades on hemoglobin.[13] 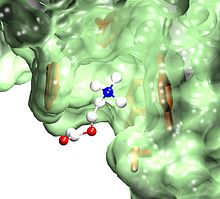 In 1970, Changeux isolated the nicotinic acetylcholine receptor of the eel electric organ, the first ever isolated membrane pharmacological receptor,[15] that he was able to identify thanks to the properties of a snake toxin[16] The isolation of the receptor was also later reported by Ricardo Miledi.[17] The improvements of purification methods developed in the group [18] allowed to propose that the receptor was a pentameric protein,[19] a finding quickly confirmed by the team of Arthur Karlin.[20] The group of Changeux was among the firsts to elucidate the primary structure of the subunits of the receptor,[21][22] in parallel with the group of Shosaku Numa[23] and Stephen Heinemann.[24]

Throughout the 1980s and 1990s, molecular biology technics were used to decipher the tertiary and quaternary structures of the receptor. The location of the ionic pore was identified, made up of the second transmembrane segment,[25] as shown also later by the groups of Shosaku Numa[26] and Ferdinand Hucho.[27] The molecular basis of ionic selectivity were are also identified in the transmembrane domain.[28][29][30] The structure of the binding site for the acetylcholine and nicotine was located at the interface between adjacent subunits.[31][32][33]

The quest of Changeux for the structure of the nicotinic receptor culminated recented with the publication of the structure, at atomic resolution, of a bacterial homolog in the open conformation[34] supporting the idea of a symmetrical concerted opening.

Stabilization of synapses by neuronal activity

In 1973, together with Philippe Courrège and Antoine Danchin, Changeux proposed a model describing how, during development of the nervous system, the activity of a network could cause the stabilization or regression of the synapses involved[35] and illustrated it with the neuromuscular junction. This model is effectively the precursor of the "neural Darwinism" theory further promoted by Gerald Edelman. Changeux later extended and illustrated further this idea.[36] During the 1970s, he tried to document this phenomenon, either by studying mutant animals[37][38] or by experimental denervation.[39][40]

From the mid 1980s, the group studied the compartimentalisation of the muscle cell upon development, as a model of synaptogenesis and in relation with the theoretical work on epigenesis. In particular, the group focussed on the accumulation of nicotinic receptors in the post-synaptic region upon development, concommitent to a switch of receptor identity. They were able to decrypt the different signalling pathways involved in the response to synaptic activity, showing that the accumulation resulted from an inhibition of gene transcription outside the synaptic region due to electrical activity triggering an uptake of calcium and activation of PKC,[41][42][43][44] and a stimulation of gene transcription at the synapse by the calcitonin gene-related peptide (CGRP) activating PKA[45][46][47] and the ARIA (heregulin) activating tyrosine kinase cascades.[48][49]

The 1990s saw the progressive shift of interest of Changeux from the neuromuscular junction to the nicotinic receptors expressed in the brain. Among the notable achievements of the group is the discovery that neuronal nicotinic receptors are highly permeable to calcium[50] - which explains the positive effect of nicotinic receptors on the release of many neurotransmitters in the brain[51] - but also that calcium is an allosteric modulator of those receptors[52] (This was also discovered independently by the group of John Dani[53]). The group later identified the allosteric binding sites of calcium.[14][54]

By the mid-1990s, Changeux concentrated most of his interest on the function of nicotinic receptors in the basal ganglia and in particular the mesencephalic dopaminergic system. Using mice deleted for nicotinic receptor genes, the group characterised the types of receptor subunits present in the dopaminergic cells[55][56][57] and identified the receptors mainly responsible of the dependence to nicotine, formed by the subunits α4, α6 and β2.[58][59]

From the mid-1990s, Changeux pursued an activity of computational modeling in order to investigate the basis of cognitive functions. This research did not generally involve his group at the Pasteur institute, but was mainly performed in collaboration with Stanislas Dehaene, now leading the INSERM-CEA Cognitive Neuroimaging Unit. They modeled for instance the acquisition of song recognition in birds[60] or the development of numerical abilities.[61] More recently, Dehaene and Changeux developed a model for access to consciousness based on a brain-wide recruitment of networks of neurons with long-range axons, the global workspace.[62][63]

Changeux has headed the National Advisory Committee on Bioethics in France from 1992 to 1998. He organised a scientific conference on the topic, that led to a book he edited, fondements naturel de l'ethique.

Changeux has also chaired the inter-ministry commission for the conservation of the French artistic heritage since 1989, and has been member of the scientific council of the International Agency of museums since 2007.