NOW Cambridge is the local DAB multiplex serving Cambridge. The multiplex is transmitted on Block 11C (220.352 MHz) and the Ensemble ID is C1AF. It started broadcasting on 30 September 2004. 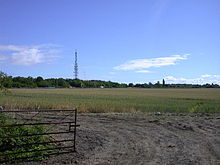 The transmitter for the multiplex is at Madingley, a few miles west of Cambridge, close to the A428 and M11. At Huntingdon, it overlaps with the NOW Peterborough multiplex to the north.

The Radio Authority awarded the DAB licence to NOW Digital on October 2, 2003. The licence was advertised on May 16, 2003, and by the closing date of August 26, 2003, only one application from NOW Digital had been received.

The Radio Authority only advertised the licence for the Cambridge-area after an e-mail was sent to the organisation to make them aware that the frequency spectrum was available in Cambridge for a Multiplex's availability to be able to launch.

Stations currently on the NOW Cambridge multiplex are: