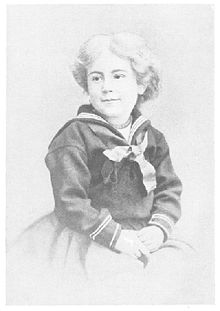 Daisy Ashford as a child

Daisy Ashford, full name Margaret Mary Julia Ashford (later Devlin) (7 April 1881 – 15 January 1972) was an English writer who is most famous for writing The Young Visiters, a novella concerning the upper class society of late 19th century England, when she was just nine years old. The novella was published in 1919, preserving her juvenile spelling and punctuation. She wrote the title as "Viseters" in her manuscript, but it was published as "Visiters".[1]

She was born in Petersham, Surrey, the daughter of Emma Georgina Walker and William Henry Roxburgh Ashford, and was largely educated at home with her sisters Maria Veronica 'Vera' (born 1882) and Angela Mary 'Angie' (born 1884). At the age of 4 Daisy dictated her first story, The Life of Father McSwiney, to her father; it was published in 1983. From 1889 to 1896 she and her family lived at 44 St Anne's Crescent, Lewes, where she wrote The Young Visiters.[2] As well as The Young Visiters, she wrote several other stories; a play, A Woman's Crime; and one other short novel, The Hangman's Daughter, which she considered to be her best work.[3]

She stopped writing during her teens. In 1896 the family moved to the Wallands area of Lewes,[2] and in 1904 she moved with her family to Bexhill, and then to London where she worked as a secretary. She also ran a canteen in Dover during the First World War. When published in 1919, The Young Visiters was an immediate success, and several of her other stories were published in 1920. In the same year, she married James Devlin and settled in Norfolk, at one time running the King's Arms Hotel in Reepham. She did not write in later years, although in old age she did begin an autobiography which she later destroyed.[3] She died in 1972.

Ashford's name was sometimes used as a way to criticize adult authors of the 1920s if their style was deemed too childish or naïve; Edmund Wilson referred to the novel This Side of Paradise by his friend F. Scott Fitzgerald as "a classic in a class with The Young Visiters."[4]

Roman à clef Daisy Goes to the Moon by Matt K. stars Daisy Ashford, is written in Ashford's distinctive style, and is the first of a series of "Daisy Ashford Adventures" to be published. 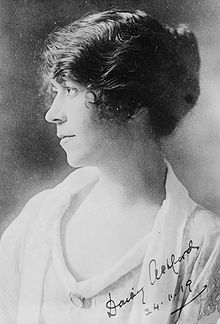