This article is about the American physician. For the Australian author see James Norman (author) 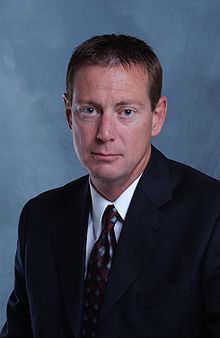 James “Jim” Norman (born December 1, 1958) is an American surgeon recognized[who?] as one of the world’s foremost authorities[citation needed] on parathyroid disease and parathyroid surgery. He operates out of the Parathyroid Center at Tampa General Hospital in Tampa, Florida.[1]

Norman is credited with changing the way parathyroid surgery (parathyroidectomy) is performed. He pioneered minimally invasive surgery for parathyroid tumors, helping to transform a relatively complex operation into a routine outpatient procedure. Approximately 2200 patients a year are operated on by Norman and his team at the Norman Parathyroid Center annually,[2] comprising 10% of all parathyroid operations performed in the United States annually and more than 10 times as many as any other institution worldwide.[3][4][5]

James Norman was born in Ravenna, Ohio but spent most of his school years in central Florida. In 1982 he received his Bachelor of Science degree in Microbiology from the University of Central Florida in Orlando, Florida. He attended Oral Roberts University School of Medicine in Tulsa, Oklahoma from 1982 to 1986 where he graduated with highest honors, was elected to AOA, Alpha Omega Alpha Medical Honor Society,[6] and was president of his class. His surgical training took place at the University of South Florida (USF) in Tampa, Florida where he became board certified in surgery in 1992.[7] He joined the surgical faculty at USF in 1991 with an emphasis in endocrine surgery and since 1995 has limited his practice to parathyroid tumors only. He was a tenured professor of both surgery and internal medicine at USF. He has published over 200 peer-reviewed articles in scientific medical journals, books and/or book chapters.[8] He is a fellow of the American College of Surgeons [9] and the American College of Endocrinology[10] and is a member of over a dozen medical societies. He has been chosen as one of “America’s Top Surgeons”[11] annually since 2003. He has also received the "Patient's Choice Award" (top 5% of practicing doctors)[12] on multiple occasions because of "exceptionally high praise granted by patients".

Research and the development of Minimally Invasive Parathyroid Surgery (MIRP)

His research interests centered on activation of the immune system during acute pancreatitis and the hormone relationships associated with endocrine diseases. While at USF, he received over $4.5MM in research funding, including grants from the Veteran’s Administration. His clinical research into advanced surgical approaches for parathyroid tumors paralleled the ongoing research with radioguided approaches to sentinel lymph node surgery for melanoma and breast cancer at Moffitt Cancer Center. The radioguided approach to parathyroid surgery was developed and subsequently given the acronym “MIRP” for Minimally Invasive Radioguided Parathyroidectomy. He was awarded US and foreign patents for the techniques of MIRP surgery.[13] He now holds six patents in several disciplines.[14][15][16]

Use of the Internet

Pioneering the use of the Internet for health education in the early 1990s, by 1998 his award-winning websites EndocrineWeb.com<[17] and Parathyroid.com[18] attracted the attention of venture capital investors in the Silicon Valley in California. In 1999 he founded YourDoctor.com (since then re-named Healthline.com)[19] with $20MM in venture capital from VantagePoint Venture Partners and JHK Investments. He oversaw the development of this company for several years, developing innovative indexing and searching tools specific for medical information for which he was awarded several patents.[20][21] His “HealthMap” and "HealthLink" architectures are a centerpiece of the Healthline software product,[22] a system that runs many major medical websites including Yahoo Health, Merck, ABC Digital News, Aetna, StayWell, US News World Reports, and many others.[23][24] Healthline Media Network. As the founder of Healthline, he served on the board of directors until 2005. At that time his role changed to become a member of the medical advisory board where he continues to serve today.[25]

EndocrineWeb continues as the largest website devoted to endocrine disorders. In 2009 EndocrineWeb was merged with several other disease-specific sites to become Vertical Health.[26] Norman remains the director of the surgical components of EndocrineWeb as well as one of its executive editors.[27]

Parathyroid.com is recognized as the leading written authority on parathyroid disease.

Most recently he established Parathyroid.TV as a video-based educational website.

Norman founded the National Parathyroid Education Foundation in 2010 with a personal $1MM donation. The foundation was begun in response to requests by thousands of patients who were frustrated with the delay in the diagnosis of their parathyroid tumor as they seek a mechanism to teach others about the symptoms and treatment for hyperparathyroidism. The foundation has a 501(c)3 designation and is aimed solely at increasing the awareness of the dangers of high calcium and parathyroid tumors.