Gloucester is a traditional, unpasteurised, semi-hard cheese which has been made in Gloucestershire, England, since the 16th century, at one time made only with the milk of once nearly-extinct Gloucester cattle. 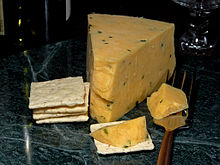 Cotswold Cheese is made by blending chives and spring onions into Double Gloucester, as shown in the image below. [2] Cotswold cheese is a trademarked name and can only be made by Long Clawson Dairy.[3]

Huntsman cheese, also known as Stilchester, is made with alternating layers of Double Gloucester and Stilton.

Double Gloucester cheese is also used every spring for the Cooper's Hill Cheese-Rolling and Wake, a sport considered to be dangerous due to the lengthy, steep Gloucestershire hillside[4] (50% downhill gradient at over 200 yards) in which the event takes place.