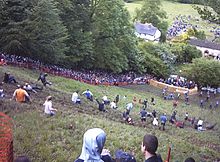 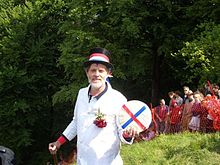 The MC holding the cheese.

The Cooper's Hill Cheese-Rolling and Wake is an annual event held on the Spring Bank Holiday at Cooper's Hill, (grid reference SO892146) near Gloucester in the Cotswolds region of England.[1] It is traditionally by and for the people who live in the local village of Brockworth, but now people from all over the world take part. The event takes its name from the hill on which it occurs.

The event is traditional. In recent years, it has been managed in a quasi-official manner, but the events of 2010 and 2011 took place spontaneously without any management. Spectators were furious at the prospect of being charged a £20 entry fee.[2]

From the top of the hill a round of Double Gloucester cheese is rolled, and competitors race down the hill after it. The first person over the finish line at the bottom of the hill wins the cheese. In theory, competitors are aiming to catch the cheese, however it has around a one second head start and can reach speeds up to 70 mph (112 km/h), enough to knock over and injure a spectator.

"The Cheese Rollers" pub in the nearby village of Shurdington, about 3 miles from Cooper's Hill, takes its name from the event. The nearest pubs to the event are The Cross Hands and The Victoria (both of which are in Brockworth) which competitors frequent for some pre-event Dutch courage or discussion of tactics, and after the event for some convalescence.

Cooper's Hill is a stop on the Cotswold Way.

Accurate information is hard to come by, but the tradition is at least 200 years old. Each year the event becomes more and more popular with contestants coming from all across the world to compete or even simply to spectate.[3]

The 2010 event took place without management due to safety concerns over the number of people visiting the event,[4] but it is hoped that it will continue to be held, following the launch of a 'Save The Cheese Roll' campaign.[5] Despite the cancellation and lack of paramedics, around 500 people showed up in 2010 to hold some spontaneous races, with six time champion Chris Anderson winning again. No major injuries were reported.

On 24 March 2011, it was announced that no management would occur for another year. The organisers blamed backlashes that included death threats following an announcement of how the 2011 event would be run. The plans had been made to conduct the event under mounting pressure from the local council who stipulated it should include security, perimeter fencing to allow crowd control and spectator areas that would charge an entrance fee. The event proceeded without management.

"No-one's going to stop us doing it. They say it's not official but we are all Brockworth people and we're running the cheese today so it is official. We strongly believe in it."
—Former winner Helen Thorpe in May 2011.[2]

At this stage the future of management of the event remains unknown.[2]

"Since we announced an entry fee, we have been bombarded with so much hostility and criticism, much of it at a personal level, including accusations of profiteering and some of the committee have even received threats."
—Cheese Rolling Committee spokesman Richard Jefferies speaking in March 2011.[2]

The cheese used in the event is Double Gloucester, a hard cheese typically manufactured in cylindrical blocks.[6] The current supplier is local cheesemaker Diana Smart,[7] who has supplied the cheese since 1988.[8]

During the Second World War rationing was introduced, preventing the use of a cheese in the event. Consequently, from 1941 to 1954 a wooden "cheese" was used instead with a piece of cheese in a hollow space in the centre of the wooden replica.[9] 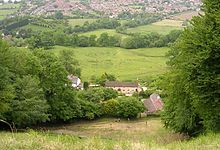 A view down Cooper's Hill, from the start point of the race to the finish (where the dog-walkers are). The face of the hill itself is concave and hence cannot be seen from this angle. The posts at the bottom are signs from the local council requesting that, to avoid soil erosion, people do not walk on the face of the hill. The posts are removed for the annual event.

Due to the steepness and uneven surface of the hill there are usually a number of injuries, ranging from sprained ankles to broken bones and concussion. A first aid service is provided by the local St John Ambulance (Gloucester, Cheltenham and Stroud Divisions) at the bottom of the hill, with a volunteer rescue group on hand to carry down to them any casualties who do not end up at the bottom through gravity. A number of ambulance vehicles attend the event, since there is invariably at least one, and often several injuries requiring hospital treatment. Cooper's Hill Cheese Rolling has been summarised as "twenty young men chase a cheese off a cliff and tumble 200 yards to the bottom, where they are scraped up by paramedics and packed off to hospital".[10]

The race of 2005 was delayed while the ambulances returned from the hospital, all of them having been required to transport casualties from previous races. Nevertheless, it was one of the most popular events in recent years, with many more participants than were able to run in the four races.

Dave Allen is widely credited to bringing cheese rolling to a wider audience than just locals, when he visited during his 1970s series, Dave Allen At Large. After that it attracted ever-increasing levels of TV coverage.

Gloucestershire online magazine SoGlos.com has produced a number of cheese rolling videos, published on YouTube and gaining viral video momentum - each being viewed in excess of one million times.[11]

Cheese Rolling was prominently featured in the first episode of the (UK) channel Five series Rory & Paddy's Great British Adventure, broadcast on 13 August 2008, and was described as "the grandaddy of weird sports" by the titular Rory McGrath and Paddy McGuinness

Cheese rolling appeared in the television series ER, Season 14 Episode 8, "Coming Home", where a motley bunch of cheese rolling enthusiasts (with accents of dubious accuracy) have a dispute, allowing Morris to demonstrate the Judgement of Solomon.

The Cheese Rolling festival was briefly mentioned in episode 6x03 of Gilmore Girls "The Ungraduate" in which Logan Huntzberger speaks of his time in Gloucestershire with his friends Finn and Collin. Logan shows his bandaged hand where he had injured himself during the cheese rolling festival.

In 2008, the event was attended by a Brazilian comic duo, Vesgo and Silvio, from the TV show Pânico na TV, although the couple failed to make it to the bottom of the hill.

Cheese rolling is an online game on the virtual pet site Neopets and carries the same rules.

The Maccabees video for their song 'Can You Give It' features the 2009 event and winner.

In March, 2010, a video game which pays homage to the event titled "Cooper's Hill" was released for the iPhone and iPod Touch.