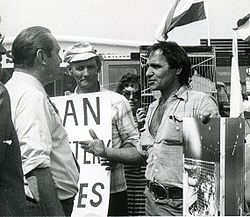 The logo for Compassion in World Farming.

Compassion in World Farming is a campaigning and lobbying animal welfare organisation, with headquarters in the UK, branches in eight European countries and international representatives in China, Australia and South Africa. The organization is supported by various celebrities including Joanna Lumley, and campaigns against the live export of animals, certain methods of livestock slaughter, and all systems of factory farming.

Compassion in World Farming in the UK is a registered charity.

The goals of Compassion in World Farming, as outlined by the organization, are:

On its 40th anniversary in 2007 the charity released a 6-minute film about their main achievements and challenges ahead narrated by their patron Joanna Lumley OBE, who is a long-standing supporter of the organisation.[2]

The charity won the BBC Radio 4 Food and Farming Award in 2007 for the best food campaigner/educator.

Compassion in World Farming was also given the RSPCA Special Investigation Award in 2007 for its investigation on the long distance transport of calves from the UK to continental Europe and for investigating the intensive farming of laying hens in the egg industry in Europe.[3]

‘Ban the battery cage’ is a campaign against keeping egg-laying hens in battery cages. A ban on the use of barren battery cages within the EU is due to be brought into force in January 2012 but “enriched” cages will still be permitted.

Compassion in World Farming works with politicians, retailers and producers to push for an end to this system. The organization's Good Egg Awards celebrate companies who commit to sourcing only cage-free (barn, free-range or organic) eggs.

‘Stop “cuts & crates”’ is a campaign for ending the use of crates for breeding sows, and for more space and environmental enrichment for pigs reared for meat. Compassion has created a book and DVD outlining good agricultural practices for pig farming.

‘Beyond calf exports’ looks at alternative uses for UK male dairy calves, which are currently unprofitable in the UK, so are either shot at birth or exported over long distances to be reared for veal on the continent in systems that do not meet UK welfare standards. Compassion is working with the food and farming industry to find solutions where calves are reared in higher welfare systems in the UK for beef or veal.

‘Free the chickens’ is a campaign to encourage consumers to buy chicken meat from "higher welfare" systems. Compassion is working with celebrity chef Hugh Fearnley-Whittingstall on the Chicken Out! campaign.

‘End factory farming’ is a campaign to raise awareness about possible problems caused by factory farming and over-consumption of meat, such as health problems for humans, pollution, greenhouse gas emissions, world hunger and poverty. Compassion encourages people to eat higher welfare animal products and to eat less meat and dairy.

‘End long-distance live transport’ is a campaign against the long distance transport of animals via road, rail, sea or air. Compassion in World Farming joined forces with MEP Neil Parish in support of his petition calling for an EU-wide limit of 8 hours on journeys to slaughter.[4]

Food business: Compassion’s Food Policy Unit was set up in 2006. It launched the Good Egg Awards in March 2007 to recognise companies in the EU who are using cage-free (barn, free-range or organic) eggs. The Awards reflect the charity’s food policy work which aims to engage with and reward companies for the efforts they make to improve farm animal welfare through the products they sell. Previous winners have included McDonald's (Europe), JD Wetherspoon (UK), Carrefour (Belgium), Subway (UK and Ireland) and Marks & Spencer (UK). Combined, the 2007 and 2008 Awards have ensured a cage-free life for 15 million hens. The Food Policy Unit also conducts a UK supermarket survey every two years to score all major UK supermarkets on their farm animal welfare performance. Food retailers scoring highly in the survey are celebrated in the Compassionate Supermarket Awards. In 2007 Marks & Spencer was the overall winner with Sainsbury’s taking the prizes for both Best Volume Retailer and Most Improved Supermarket. Results from the Supermarket Survey are also used to advise British consumers about how to shop compassionately in the UK and the charity’s Compassionate Shopping Guide aims to help consumers to make more informed shopping choices.

Education: Compassion produces educational resources for teachers and students including videos, teaching materials, information booklets and web-based software. These have been translated into a range of languages and adaptations have appeared in the Netherlands, Australia and South Africa.[4]

Veal crates banned in the UK and Europe In 1987, following a campaign by Compassion in World Farming, the UK government voted to phase out veal crates for calves. The ban came into place in the UK in 1990. Six years later, continued pressure from Compassion in World Farming also resulted in the EU agreeing to phase out veal crates. The EU ban came into force in 2007.

Sow stalls banned in the UK and across Europe Compassion in World Farming’s campaigns for higher welfare standards for pigs resulted in the UK introducing legislation in 1991 to phase out sow stalls (gestation crates) and sow tethers for pregnant sows by 1999. In 2001, Compassion in World Farming also achieved an EU-wide ban on tethers from 2006 and on stalls from 2013.

Animal sentience Following a ten-year campaign by Compassion in World Farming, in 1997, a Protocol annexed to the Treaty of Amsterdam legally recognised animals as sentient beings, capable of feeling pain and discomfort. The Protocol requires the EU and its Member States to ‘pay full regard to the welfare requirements of animals’. This agreement underpins and paves the way for all future legislation regarding farm animal welfare in Europe.

Barren battery cages banned across Europe In 1999 the EU agreed to ban barren battery cages for laying hens from 2012. Compassion in World Farming is now campaigning to ensure the ban comes into force as agreed. In 2007, the UK government stated the ban would be enforced in the UK despite continued opposition from many in the egg industry and many EU member states.

Live exports: an end to subsidies In 2005, export subsidies for EU farmers transporting live cattle to the Middle East were eliminated. Compassion in World Farming continues to campaign for a maximum journey time of eight hours to be endorsed by EU Agriculture Ministers.[5]

In 1988 Compassion in World Farming made a Public Information Film called Welcome To The Battery for the cinema advertisements. This was to promote awareness and encourage the boycotting of Battery Farming. Rated 18, it was set up like a public announcement and centered on a spokesperson describing what happens to chickens on entering the battery and what occurs from there on in. Ending on a solitary scrawny chicken that is missing feathers and is in obvious poor health. With the caption displayed being Buy Free Range Eggs...THEY DON'T COST THIS MUCH.