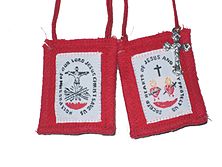 A Roman Catholic sacramental: Fivefold Scapular with Scapular of the Passion showing a tiny crucifix attached

Sacramentals are material objects, things or actions (sacramentalia) set apart or blessed by the Roman Catholic Church, the Orthodox Churches, the Anglican Churches, and Old Catholic Churches to manifest the respect due to the Sacraments, and so to excite good thoughts and to increase devotion, and through these movements of the heart to remit venial sin, according to the Council of Trent (Session XXII, 15).

In Roman Catholicism Sacramentals such as Holy water, the Crucifix or the Saint Benedict Medal are recommended as a means of protection against evil.[1] 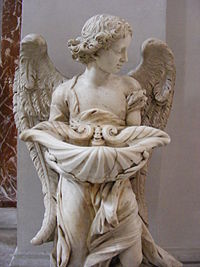 When the term is used in the singular it is preceded by an article ("a sacramental" or "the sacramental") as sacramental is also an adjective describing the seven Sacraments.

These churches recognize two differences between the Sacraments and the sacramentals:

Although the Catholic Church restricts the reception of the Sacraments by non-Catholics, this is not true of the sacramentals. The pious use of sacramentals by non-Catholics is permitted and even encouraged. As blessed objects or rituals that represent sacred beliefs and persons, disrespect to sacramentals is considered a form of sacrilege.

The Catechism of the Catholic Church states that sacramentals "do not confer the grace of the Holy Spirit in the way that the sacraments do, but by the Church's prayer, they prepare us to receive grace and dispose us to cooperate with it." [2]

Lay Catholics are not permitted to perform exorcisms but they can use Holy water and other sacramentals such as the Saint Benedict Medal or the Crucifix for warding off evil.[3]

The Saint Benedict Medal, used in a rosary.

The Saint Benedict Medal which includes the Vade Retro Satana formula to ward off Satan has been in use at least since the 18th century and in 1742 it received the approval of Pope Benedict XIV. It later became part of the Roman Catholic ritual.[4]

The Crucifix is widely considered to be one of the most effective means of averting or opposing demons, as stated by many exorcists, including the famous exorcist of the Vatican, Father Gabriele Amorth.[5]

The Catechism of the Catholic Church (number 301) specifically refers to the use of Holy water for "protection from the powers of darkness".[6] Catholic saints have written about the power of Holy water as a force that repels evil. Saint Teresa of Avila, a Doctor of the Church who reported visions of Jesus and Mary, was a strong believer in the power of Holy water and wrote that she used it with success to repel evil and temptations.[7]

The Scapular of St. Michael the Archangel is associated with Archangel Michael, the chief enemy of Satan. Pope Pius IX gave this scapular his blessing, but it was first formally approved under Pope Leo XIII. The scapular bears the well-known representation of the Archangel St. Michael slaying the dragon and the inscription "Quis ut Deus?" meaning Who is like God?.[8] 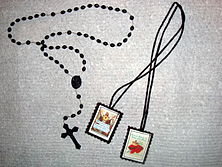 Roman Catholic Marian sacramentals: Rosary beads and a Scapular of Our Lady of Mount Carmel

A number of specifically Marian sacramentals are used only by some Roman Catholics. These include the Rosary, various scapulars, as well as medals such as the Miraculous Medal. The Rosary and the scapular are by far the most used Marian sacramentals.

Here are several Marian scapulars in use:

Of these, the Scapular of Our Lady of Mount Carmel has the largest following.

Some examples of rituals that are sacramentals are making the sign of the cross, bowing the head or bowing deeply, folding hands, genuflection, prostration, the imposition of blessed ashes (the ashes themselves are also a sacramental), the recital of blessings, the washing of feet, the celebration of the canonical hours and the seasons of the liturgical year, exorcisms, the reception of the minor orders, and the churching of women.

Other examples may be found at Anglican devotions and Catholic devotions.