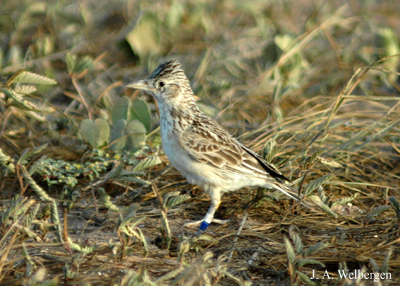 The Raso Lark ("Alauda razae") is a small bird with a highly restricted range, being found only on Raso islet in the . This member of the lives in highly arid terrain, and is considered one of the least known birds in the western region, due to its remoteness and the lack of much ornithological study on the archipelago as a whole.

The Raso Lark is restricted to one small island in the Cape Verde group, although historically it is believed to have ranged over two other islands, Branco and ; all three of these islands were joined in the last . Branco island itself has no permanent water and has never been inhabited by people, a fact that has probably saved the lark from extinction until now.

The Raso Lark feeds by digging in the ground for e, and s of the nutsedge. Both sexes also feed on grass seeds, and insects such as butterflies, moths and s. The female lays one to three eggs after the rains. Courtship behaviour is like that of the . The incubation time is thought to be 15 days.

The tiny population size, last thought to be ~150 birds, coupled with the highly skewed sex ratio (around 2 males to each female) make this species one of real concern. The reproductive success of the birds is very low, probably due to predation by the near-endemic . The Neglected Kestrel "Falco (tinnunculus) neglectus" is a predator of Razo larks. Although the island is currently free of mammalian s such as s or s, and is a closed reserve, the likelihood of a single unauthorized visit causing massive damage remains high. It has been suggested that establishing a second population on the gecko-free island of Santa Luzia, which historically might also have had the lark, should be a conservation priority.