In 1920, the University of Virginia began offering students majoring in economics the opportunity to specialize in business administration. One year later a $200,000 donation from stockbroker, alumnus and Charlottesville philanthropist Paul Goodloe McIntire made the establishment of the McIntire School of Commerce and Business Administration possible.[1][2] Over the next three decades McIntire operated as a separate entity from the College of Arts and Sciences, but worked closely with the James Wilson School of Economics. In 1952, the University’s Board of Visitors approved the establishment of the McIntire School as a professional school to be administered as a separate unit of the University, distinct from the College.[3]

Back to the Lawn 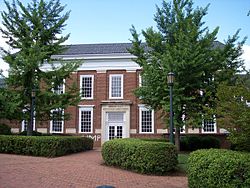 Monroe Hall, the former main building for the Commerce School.

McIntire recently moved from Monroe Hall to Rouss Hall. This migration, entitled "Back to the Lawn"[4] by the school, began in April of 2005.[5] The reason for this move, in the School's own words, was listed as follows: "Very simply, in addition to increasing pressure to compete with our peer institutions for top students and faculty, more space is needed to deliver our world-class business programs. To offer the best in business education, schools require state-of-the-art classrooms and labs and high levels of technology, including an environment that simulates the business world. The existing building [Monroe Hall] does not allow for further expansion of our programs and therefore inhibits our ability to offer more programs to a wider group of students. The new building, Rouss Hall, will provide an environment to allow McIntire to continue to compete at the very top of the business school rankings."[6]

Students apply for enrollment at McIntire during the Spring of their second year and begin coursework in the Fall of their third year. During this year, students are enrolled in a 12 credit, block-style class called the Integrated Core Experience (the "ICE Block"). Blocks are taught by a group of professors, each professor specializing in a different aspect of business (marketing, finance, communications, strategy, systems, organizational behavior, and quantitative analysis). Professors conduct subject-based coursework on a rotating basis, while the overall focus is on the integration of all areas.

During the first semester at McIntire, students assume the role of an analyst and work on a semester-long project for one of four Fortune 500 Companies (currently Alcoa, Rolls-Royce, ABB Group or Major League Baseball). The team-based project requires students to advise senior management on a problem or objective the company is facing.

In 2009, McIntire was ranked number 1 nationally for undergraduate business schools by BusinessWeek.[7]

McIntire's job placement is among the best in the nation. In 2008, the starting salary stood at $58,000, up 10% from the previous year. A significant portion of graduates (more than 25%) obtain analyst positions at New York investment banks, while others work in accounting, consulting or marketing. Around 57% end up working in Finance related jobs, while another 27% work in Consulting-related jobs, according to the School's Website.[8]